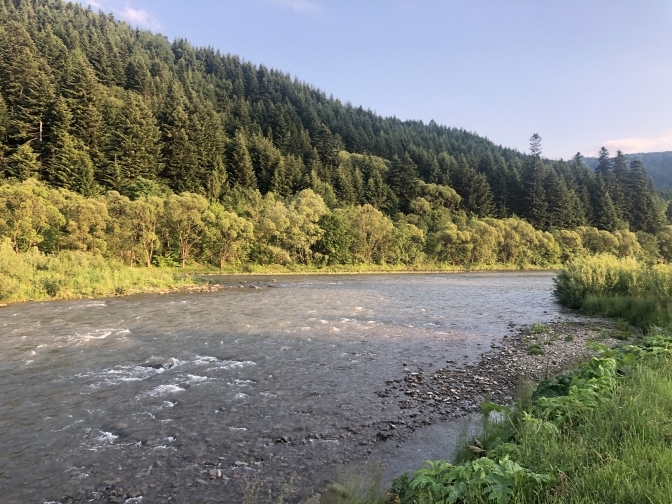 A Carpathian Idyll on the River Resistance

Tweet
1270 0
On our descent, I felt the forest power. With walking stick in hand I started running downhill through thick foliage in cool air. Though it was summer I could see my breath. I was swimming or maybe flying.

I needed fresh air and peace, so I decamped to Skole, 90 minutes south of Lviv by train. A mountain-encircled city of 6,000, it feels like a village, with people, dogs, and chickens mucking about winding lanes. Roosters and the roaring Opir (Resistance) River are the soundtrack.

Soon I was in the healing realm of the forest. I grew up in a small forest and I love the depth and freedom of Ukrainian Galician forests. Like Sweden this is a rare country where you can walk most anywhere. As a friend, a bass player regular at the LV Café jazz club says, «the Carpathians are gentle. You’re not likely to get eaten by a bear. You can walk anywhere.»

I took dinner in my hotel restaurant, Vivcharuk, which means «shepherd hut.» In a cellar, it’s like a Cossack chieftain’s lair with tables of families and hikers divided by fanciful wood-carvings. Its tasty local mushroom-centric menu ranks with some of my best meal experiences, whether in a country inn outside of Bologna or the high-end cuisine of Copehagen. 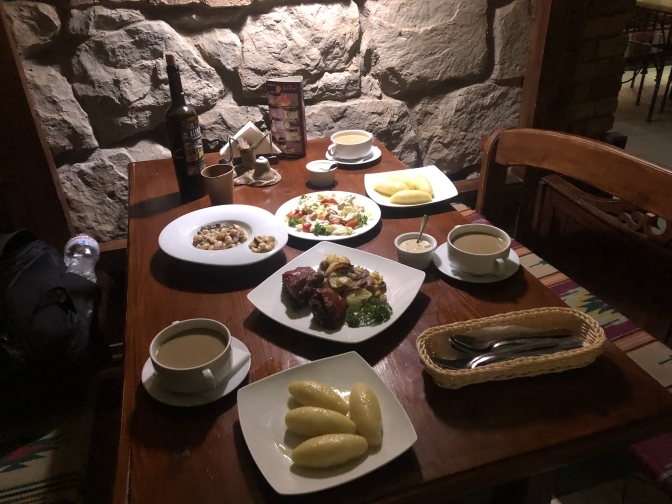 Among the delights is what I call Ukrainian gnocchi, halushky, whose yellow soft golden dough is filled with savory mountain cheese, topped with a white (bili, or porcini) mushroom sauce. Everywhere there are mushrooms, topped on veal, in a power-giving soup, or mixed in banosh which is akin to polenta. 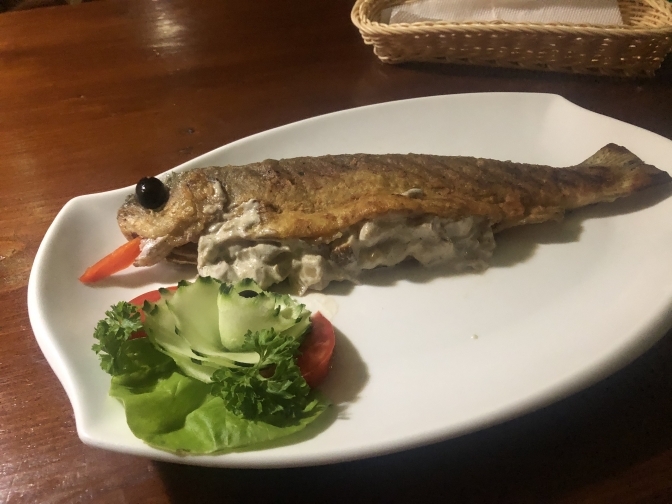 I came to Skola not just to eat but to move, which means a daily run in the mountain forest just across the river. And at least twice a day, I take a walk to the Zarinok. Generically, «zarinok» means the land alongside a river. In Skola the Zarinok was a quarantine project of Volodymyr Kebala and family, a local native working in Kyiv. With friends and family, he cleaned up the riverbanks here and made a place both stunning and calm, where goats cut the grass, you can hit a golf ball, have a picnic, fish, swim, or contemplate existence. 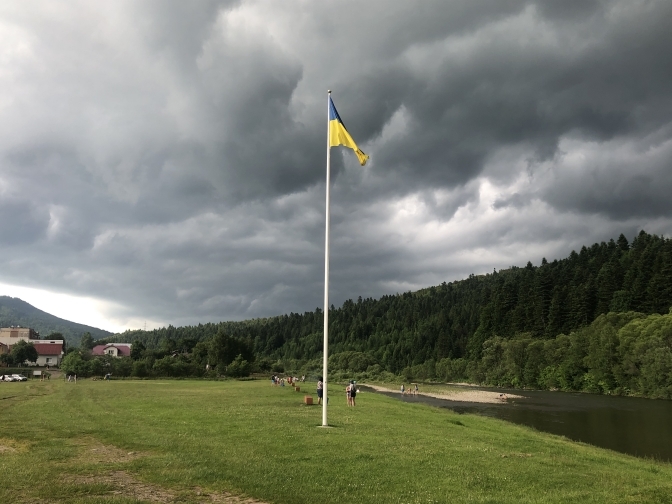 I can sit on those serene banks for hours and stare at unspoiled forest with what seems to be infinite shades of green in what turns into a psychedelic experience, if you let it. Not even in my ancestral Ireland have I seen such green. Green therapy, the Ukrainians call it.

On those banks, I was reading A Time of Gifts, by the great British adventurer Patrick Leigh Fermor. He notes that Schubert wrote his Trout Quintet – recreating the sound of fish in water – about the River Danube. I played it while walking the banks and before returning to Vivcharkuk for a supper of trout stuffed with mushrooms.

A visit from Lviv

I attempted to keep secret the location of my Carpathian idyll, but intrepid and loyal friends, I’ll call them Oksana and Kolya, came from Lviv to see me. It was the starting day of the Gourgany race with hundreds of athletes assembling in Skole, some of them to run 100km overnight through these mountains.

My friends and I took to some of those same trails, marked with occasional flags and signals for ghostly runners we never saw. We began our expedition in a plunky Subaru Forester, stopping here and there to sort out conflicting directions from villagers.

When mud and rocks staked their claim, we began to walk up the forested mountain trail.

We had seen no one in an hour when a dozen hikers appeared – friendly Jehova’s Witnesses from all over Ukraine. Oksana, wearing sunglasses and dressed for the beach, was holding a bottle of wine, in case we all got stuck. Despite their creed, they did not judge harshly the wine and pointed us in the right direction.

My friend Koyla had last been in this place more than 20 years before, when at age 13 he lived near a mountaintop in a tent for three weeks as part of Ukrainian scouting. His memory from age 13 was our map. Ah – «Snakes, snakes, I hate snakes,» he said often while clapping whenever we were trudging through deep brush as he searched memory and place for that fusion called direction. Sometimes Oksana, taking artistic photos, disappeared into the trees and sometimes I stopped to listen to the forest. Whenever the thick forest parted we saw extraordinary views of replicating mountains. 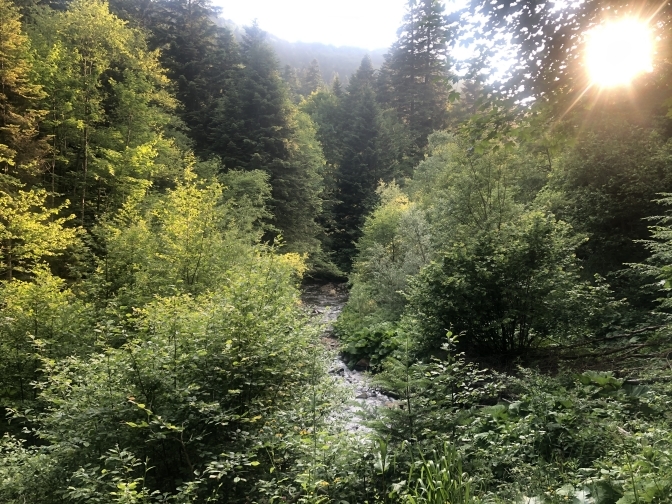 Whenever we got off course or say earlier when the car bumper kind of fell off, Kolya kept saying in English, «Everything will be, everything will be [beep] okay.» A good mantra: we talked of how we must hold on to hope no matter what, and sipped some wine, and kept walking.

We reached the Kluch (key), a forested summit with a small altar to the Ukrainian Sich Riflemen who died there in 1914 when Russians attacked them in their sleep. We all said silent prayers and bowed or knelt and then had food and drink. I poured some contents of my flask into the soil in honor of the dead. 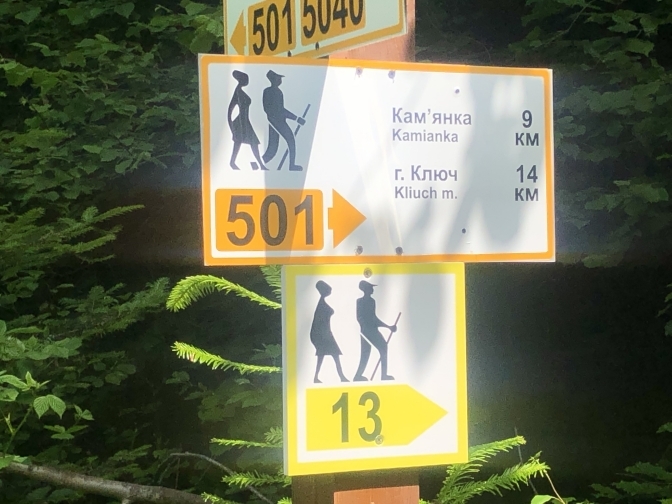 On our descent, I felt the forest power. With walking stick in hand I started running downhill through thick foliage in cool air. Though it was summer I could see my breath. I was swimming or maybe flying.

Because of all the runners in town, accomodations were full and I was going to have to leave the next day. On an evening walk, I heard music coming from the patio of a «pizza and dumpling» cafe: accordion, tambourine, voices–a rousing, and a haunting eastern vibe. The matriarch-owner welcomed me inside, gave me a beer on the house, pushed me back outside. Someone directed me to a chair. The singers wanted to pour me samohonka, lovely Ukrainian moonshine, so I drained my beer and joined them in a toast.

A couple among the crowd, with their two young kids, said they had a guest house – Dolce Vita – and they had had a cancellation. So after I moved to Dolce Vita, writing from their garden gazebo. Pork barbecue and June-flower smells wafted through the village on this national holiday, Trinity Sunday. 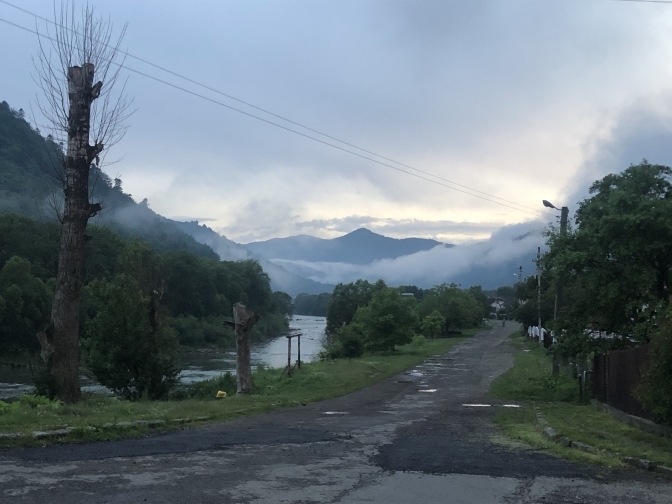 My hosts had gone out for a bit. Three friends and a dog from Kyiv entered the garden and asked where to find a chan, the Carpathian wood-fired, herb-infused hot tub. Alas, I said, you have to go to Slavaksa for the pleasures of the chan.

But in Skole you can draw power from the river, the forests, the mushroom feasts, and garden-laden lanes.