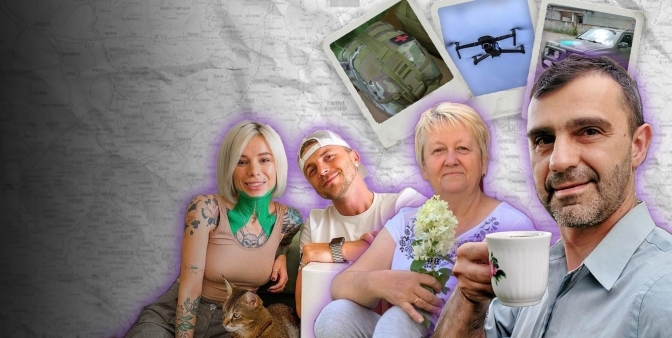 «We are drops that make up the ocean.» This is how Lviv bloggers help the army

Tweet
200 0
Bloggers in Ukraine are now massively converting their popularity into donations for the army. And it works effectively. Today, we introduce you to the stories of Taras Stadnytskyi, Lyubov Obushchak, Svyatoslav Boyko, as well as the family of Tik-tokers Bovtsailo and Hrytsko. Thanks to their fundraising campaigns, dozens of cars and hundreds of camouflage nets have already been transferred to the front, in line with thermal imagers and sights, drones and other useful things that bring our victory closer.

Taras Stadnytskyi and his initiative «My coffee for the Armed Forces»

Taras Stadnytskyi is the actor, humorist, and member of the «V.I.P. Ternopil« comedian team. Now, he helps the Ukrainian Army by telling stories to his followers every morning over a cup of coffee (we mentioned one of his initiative in our story). «We offer everyone, who has such an opportunity, to drink coffee or any other drink in a relatively safe place. To thank the Armed Forces of Ukraine for this and transfer the cost of coffee to our accounts. In this way, we share our coffee with the Armed Forces of Ukraine. And we are already converting these funds into something necessary and useful for our defenders,» – he explains.

Taras and his team have already managed to fulfil 12 large requests. Currently, the thirteenth fundraising for three Mavic drones is in the works, with more than twenty requests to come. The team also participates in the weaving of camouflage nets: they collect money, buy materials and deliver them to the location. «We help the units in various ways, but mostly assist those where friends, acquaintances or at least those known to us are fighting. We try to carefully check that the request reaches the unit and that it’s used as intended,» – Taras adds. 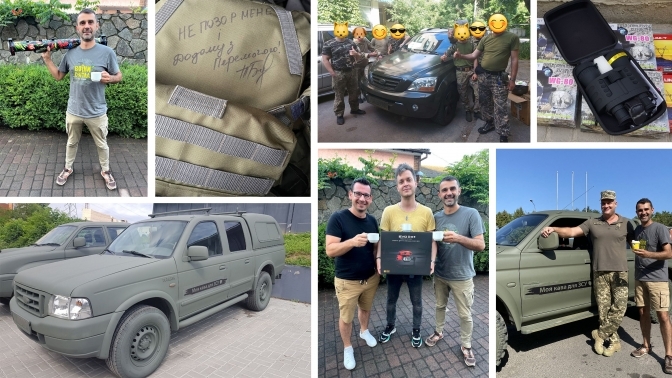 Taras says that during the first few days of the invasion, he tried to send messages to the Russians to convince them because he believed no one there realised the true situation. «Soon, a military unit approached me and asked for help with thermal imagers. We fulfilled their request within an hour. And then I understood: instead of convincing someone among the enemies, it’s better to use my time to help our defenders,» – the actor shares.

The «My Coffee for the Armed Forces» initiative assumes that donations should be equivalent to the cost of coffee, but at the same time, they must be systemic, daily. «We calculated: if 8,000 Ukrainians share their coffee every day, we will be able to get one car for the Armed Forces during a day,» – Taras explains. He adds that donations are differ in size. One of the largest donations was 116,000 hryvnias ($2500), just to close the collection for a drone.

When asked what his greatest achievement in volunteering is now, Taras Stadnytskyi answers: «If our cars and bulletproof vests save someone’s life, camouflage nets – hide headquarters and equipment, thermal imagers and night vision devices – help at night, and drones – adjust artillery or give an early warning about the enemy, this would probably be our greatest achievement.»

You can support his volunteer collections using the details: https://linktr.ee/vipternopil

«Each individual is a drop, but together we make up an ocean.» The story of Lyubov Obushchak and Sviatoslav Boyko

The couple of bloggers, Lyubov Obushchak and Svyatoslav Boyko, are actively volunteering to help the army. They often use their own funds to buy and deliver the necessary items to the front. But together with that, the spouses use their social networks to bring people together and buy something more expensive.

Recently, Lyubov managed to collect 200 thousand hryvnias ($3500) in two days. With this money, they bought a thermal imager, a thermal sight, a meteorological station, a drone, tactical belts (warbelts), and warm sleeping bags for defenders at the vanguard. Now, the blogger plans to fundraise for an anti-drone rifle worth 172 thousand hryvnias.

«We are not chasing recognition or popularity. The most important now is to help and save people’s lives,» – she says. The woman adds that she tries to take care of wounded soldiers who are currently undergoing treatment in Lviv. Their needs are different: some need food or medicine, others ask to wash their military uniforms... «One guy said that he really wanted chebureki. We went and brought the best one. They accept it all with tears in their eyes. They really appreciate being cared for. All of them are risking their lives, so the least we can do is to help in a human way,» – Lyubov explains.

Together with her husband, the woman actively runs their blogs and collects approximately 15-20 thousand hryvnias ($300-500) daily. People often transfer five or ten hryvnias. It happens that the bank withdraws the commission and about three hryvnias (8 cents) come to the account. Then, the senders write to them, apologizing that it’s so little. «And it’s incredible! That’s how it works,» – the blogger adds. «Each individual is a drop, but together we make up an ocean. It inspires people. And they are no longer ashamed to dump as much as they can. When everyone joins in, it turns out a cool sum – and we can cover some urgent need.» 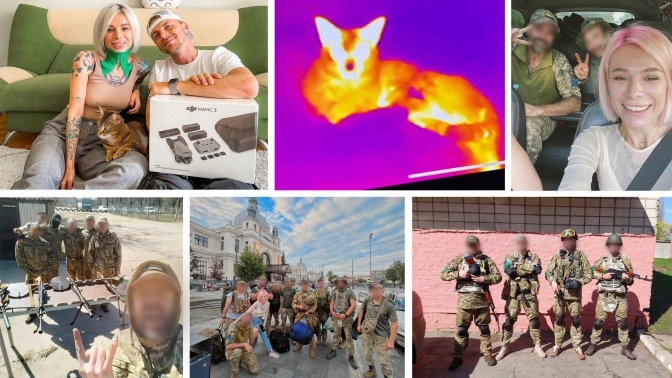 Lyubov is constantly looking for opportunities to get the things you need for free or at a discount, for instance, directly from the manufacturer. Many entrepreneurs respond and help. She says that it’s she who is most often engaged in organizational work, while Svyatoslav works more on the information front.

Among volunteer bloggers, Lyubov singles out Khrystia Zhuk, saying that she can easily collect 300,000 in a day due to having an audience that has a great trust in her.

«Quite often, people send us much more money than we announced to be collected at that moment. This money remains in the bank and waits for the next collection. I make screenshots from all receipts and post them. We try to receive photo or video reports from the military, but only when it’s appropriate and safe for them,» – the blogger says. Lyubov notes that now, she’s also asking the units to send formal requests for certain needs in light of recent searches and cases against volunteers (Read more: «State would have to support the volunteers.» Public activist Sviatoslav Litynskyi on criminal cases).

«It’s unfortunate that we are uniting under these circumstances, but we managed to show the world our support for each other. It seems that I already know half of Ukraine: through correspondence, calls... There are no people in my circle of communication who are not currently helping the front,» – Lyubov shares.

You can support their volunteer collections using the details:

A family of volunteering Tiktokers

The Bovtsailo and Hrytsko families live in the village of Staryi Dobrotvir in the Chervonohrad region and have an audience of thousands of people watching their humorous videos on Tik Tok. Pages in social networks are run by Maria Bovtsailo with her daughter Iryna and son Volodymyr.

«My mother was a housewife before blogging,» – Iryna Hrytsko says. «Brother and my husband are electricians, and I had a bakery in Lviv. But the war made its adjustments: we had to return home. Currently, I bake sourdough bread here and deliver it to customers, including to Lviv.»

The family has been volunteering since the first days of the Russian full-scale invasion. First, they brought humanitarian aid from Poland. Later, they dared to make the first big fundraising for a thermal imaging sight for a defender they knew and collected 80,000 ($2000) hryvnias in five days. They also conduct charity live broadcasts on Instagram. One of these managed to attract 21 thousand hryvnias, which was lacking for buying a car for a soldier from «Azov». At the same time, they constantly buy, sew and transfer camouflage nets to the front.

«If earlier, we ourselves offered nets to the military, now volunteers turn to us to take the nets for soldiers they know. Now, everything is turning yellow, so there is a need for yellow camouflage nets, some are already asking about winter ones,» – says Iryna. In addition, they help local volunteers organize meetings in the village and deliver products, gloves, glasses, scopes and other important things to the front. 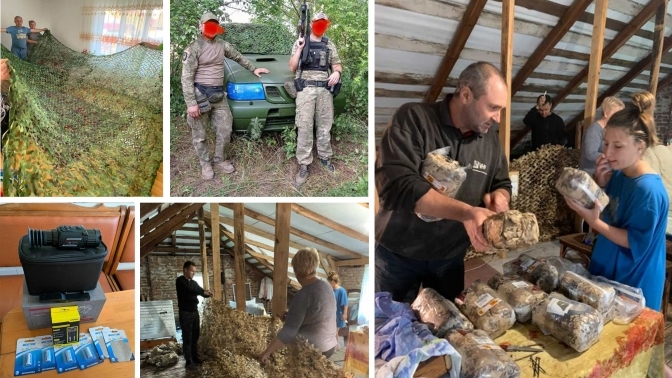 Read also: From brewing beer to fundraising for a jet. This is how a Lviv company continues its business while helping supply the army

Recently, on August 20, they helped the «House» public organization to hold a charity fair. It enabled them to collect 25,000 hryvnias, and another 26,000 over the next few days. «We transferred thirty thousand to buy cars for boys from our area who serve in the Armed Forces, and for the rest, we bought camouflage nets in Poland. Now we are sewing them into the right sizes and will soon hand over to our defenders,» – the blogger says.

She explains that many people want to help and donate, but are afraid to trust strangers, so they willingly join the meetings of various bloggers they follow on social networks. According to her, subscribers who are now abroad also provide financial support. «Ukrainians also help generously: 1000, 500 hryvnias each, but most often these are transfers of 50, 100 and 200 hryvnias. We try to explain and adapt people to not hesitate to donate even 5 and 10 hryvnias, because this is also very important,» – Iryna shares.

Pages of the family in social networks: TikTok and Instagram.

You can support their volunteer collections using the details: https://clx.by/panimariya66