20 September: The agreement on the exchange of prisoners, the Armed Forces liberated Bilohorivka in the Luhansk region 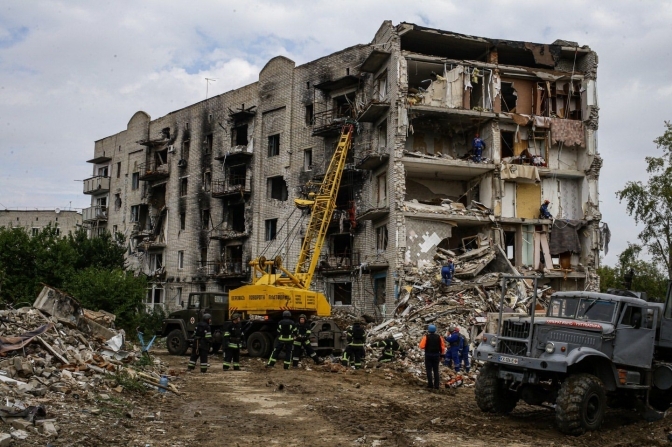 Over the past day, the Armed Forces of Ukraine inflicted fire damage on 16 enemy objects. In particular, in areas of concentration of personnel, weapons and military equipment, in areas of concentration of artillery, as well as ammunition warehouses. The Russians are losing personnel and equipment. Not only on the front line, but also in the rear. In Svatovo, units of the Defense Forces inflicted damage on the area where the enemy’s manpower was concentrated – 70% of the personnel who were at the specified object were destroyed. Fierce fighting continues.

At night, five artillery and mortar attacks were carried out on the positions of the defenders of the Luhansk region, and two airstrikes were carried out. Residents of communities bordering the Russian Federation in Luhansk Region, who cooperate with the occupiers, understand the consequences and try to leave Russia in any way possible. Significant migration has been observed in recent days in Troitske and Bilokurakyne. As it became known, the collaborators who went to work for the occupying local self-government bodies were not provided with any social guarantees.

At night – a rocket attack on Bakhmut. Two high-rise buildings were destroyed, there may be people under the rubble. Rescuers are working on the spot. Also at night – shelling of the outskirts of Toretsk; shelling of Siversk, two private houses were destroyed. The region remains without gas and partly without water and electricity. One person died and 12 were injured in the Donetsk region during the day.

Yesterday at noon in the Znob-Novgorod community – shelling from grenade launchers, 33 hits. Preliminary – no victims, data on the destruction are being clarified. Also yesterday – shelling of the Krasnopillia community, the village of Slavhorod. 15 arrivals. Direct entry into the residential building of civilians, a married couple of pensioners were injured, they are in the hospital. The house is destroyed. Four more houses were also destroyed and damaged: shrapnel pierced the walls, windows were broken, and fences were cut. Yesterday evening, there were three more shellings of the community from rocket launchers. Information about the consequences is being clarified.

During the past 24 hours, the enemy continued shelling the settlements of Kharkiv region along the border line with the Russian Federation and the contact line in Kharkiv, Kupiansk, Derhachi and Izyum districts. There are wounded and dead. According to the Center for Emergency Medical Assistance, two people were killed and three people were injured as a result of enemy shelling in the Kupiansk district during the past day. In addition, two people in the Derhachi community were injured as a result of a mine explosion. Mine danger in the liberated territories remains very high.

At night, under the sights of the enemy – Nikopol district again, five shellings per night. Nikopol, Chervonohryhorivka, ​​and Marhanets communities were hit by Russian «Hrad» and heavy artillery. Previously, people were not injured. The scale of the destruction is being clarified. Rescuers and police are on the scene.

During the past day and night, the enemy struck the water zone and the coastal zone of the town of Ochakiv. There are no casualties. Yesterday, shelling also took place outside the villages of Chervona Dolyna and Shyroke. There were no injuries or damage. The Berezneguvate community remains under enemy fire. At night, the town of Berezneguvate and its surroundings came under fire again. As a result of the shelling, the educational institution was damaged – the windows of the building were blown out. There are no casualties.

The situation remains extremely difficult, hostilities continue. There are constant reports of kidnappings and cases of looting by the occupiers. The enemy carried out shelling along the entire contact line. More than 18 settlements were affected by fire, including Arkhanhelske, Vysokopillia and Karierne, Petrivka, Myrolyubivka, Pravdyne, Davydiv Brid, Blahodativka, Tavriyske, Novobratske and Osokorivka. Unfortunately, there are dead and wounded. Civilian infrastructure was also damaged.

According to the information of Operational Commander «Pivden», the Armed Forces of Ukraine continue to repulse enemy attacks and consolidate tactical positions in the areas of the front. Information appeared in hostile media that the local Gauleiter V. Saldo returned to the duties of the head of the «Administration of the Kherson Region». The Security Service of Ukraine reported suspicion of collaborative activities to a Kherson girl who went to cooperate with the occupiers and took the position of «director» of a school in temporarily occupied Kherson. The suspect is implementing an education system in the city according to the standards of the Russian Federation and called on the people of Kherson to cooperate with the enemy.

UKRAINE: Russia’s losses: during the day, the Armed Forces eliminated another 160 invaders, shot down a plane, a missile and five drones

The rejected enemy in the Luhansk region went on the defensive: Bilohorivka was liberated by the Armed Forces

Explosions and shooting were heard in Sevastopol in the morning. The occupation authorities do not comment on this

The occupiers are displacing their hatred for defeats at the front on Ukrainian women, this is evidenced by intercepted telephone conversations – Security Service of Ukraine

«Referendums» will not change anything, Ukraine will continue to liberate its territories – Kuleba

WORLD: «NATO is not at war with Russia»: the head of the alliance’s military committee outlined NATO’s position in the Ukrainian-Russian war

To announce a general mobilization means to recognize oneself as an aggressor: GUR on the possible mobilization of Russia

Ukraine and Russia agreed on the exchange of 200 prisoners – Erdogan

Erdogan and Putin met in Uzbekistan.

Turkish President Recep Tayyip Erdogan announced that Ukraine and Russia were able to agree on the exchange of 200 prisoners of war.

PBS writes about it.

According to Erdogan, he met with Russian President Vladimir Putin in Uzbekistan, where they had «very big discussions.»

«And it seemed to me that he was ready to end the war as soon as possible. That was my impression, because the way things are going now is quite problematic. 200 hostages will be exchanged with the consent of the parties. I think that a significant step forward will be made,» – Erdogan said.

The President of Turkey emphasized that «no invasion can be justified» and stressed that after the war, Ukraine will fully restore its territorial integrity, including Crimea.