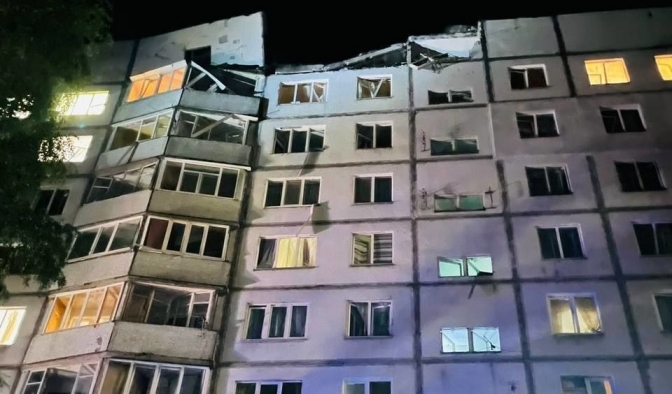 Over the past 24 hours, the Air Force of the Defense Forces has struck enemy positions, hitting 19 areas where the enemy’s manpower and military equipment are concentrated, as well as the positions of anti-aircraft missile systems. Missile troops and artillery over the past day inflicted fire damage on 40 enemy objects. In response that night, the enemy launched seven artillery strikes and used aviation three times. The commandant’s office in the city of Svatove, where the enemy organized a headquarters and ammunition depot, was destroyed. Several explosions were heard there last day. Against the background of significant losses at the front, the Russians continue forced mobilization.

At night – a rocket attack on Kurakhove (a direct hit to a high-rise building, 12 injured, information on the dead is being clarified, there may still be people under the rubble); shelling of the villages of Vilne and Kozatske, without casualties. Also at night – an airstrike on Siversk, the extent of the destruction is being clarified; air strike on Bakhmut. The sports ground was destroyed. Toretsk was shelled in the morning (the prosecutor’s office building was damaged, a policeman was injured); repeated shelling of Kurakhove (surroundings); shelling of the center of the village of Novoukrayinka, hitting the yard of a private house.

Over the past day, six people were killed and 20 wounded in the Donetsk region. The region remains without gas and partly without water and electricity.

At night, 13 explosions (preliminarily – barrel artillery) were recorded in the area of ​​the western outskirts of the village Bachivsk. According to preliminary data, there were no victims. Over the past day, the Russians shelled seven communities in the Sumy region. Almost 170 attacks from mortars, barrel artillery, grenade launchers, MLRS, as well as five machine gun rounds were recorded. The shelling damaged a medical facility, power lines, and civilian homes. Fortunately, there were no human casualties beforehand.

At night, the enemy launched a rocket attack on the Kholodnohirskyi district of Kharkiv. Two nine-story residential buildings were damaged. One person was injured, 10 people were trapped in apartments due to the destruction of the stairwell. As of this morning, all of them have been rescued. An industrial building was also partially destroyed. In addition, last night the Russians launched two missile strikes at an infrastructure facility in the Chuhuiv district. Without victims and victims.

Over the past day, the enemy has massively shelled populated areas of the Kharkiv region adjacent to the borders with the Russian Federation and along the contact line. During the past day, two civilians were killed in the Kupians district, 11 more were injured, including four children. Two wounded – in Chuhuiv district.

At night, the enemy shelled the Nikopol and Kryvyi Rih districts with heavy artillery. One person was injured in Nikopol. In the city, more than 20 high-rise and private buildings, a bakery, a library, a kindergarten, cars, gas pumps and power lines were damaged. In the Kryvyi Rih district, the enemy hit the Zelenodolsk community twice. People were not injured. Several houses were damaged in the village of Velyka Kostromka. Part of the village is without electricity. Emergency crews are on site.

At night, enemy shelling with cluster shells was recorded on the southern and northern outskirts of the village. Parutine of the Kutsurub community. Fortunately, there were no casualties. Yesterday evening, the village was shelled. Yavkino of the Bashtan community. The power line was damaged, as a result of which there is no electricity supply in some settlements. In one residential building, windows were damaged. There are no casualties.

Yesterday, as a result of the shelling of the village One person was injured in Bilozirka. Also yesterday, according to the information of Operational Commander «Pivden», the enemy directed two attack drones to the coastal zone of the city of Ochakov. One drone was shot down, the second made a suicide attack on the coast. There are no casualties. Villages located on the dividing line of the Berezneguvat community remain under constant fire. During the past day, the surrounding territories were shelled by the enemy, the village was shelled. Murakhivka, Berezneguvate village in the area of ​​the compound feed plant. There are no casualties. Information about the destruction is being clarified.

Also, according to the information of Operational Commander «Pivden», in the area of ​​the village An Anteater there was an attempt of aerial reconnaissance of the occupiers, two Orlan-10s were shot down.

The situation remains difficult, hostilities continue. The occupiers continue to shell the de-occupied settlements, purposefully hitting civilian infrastructure. In temporarily occupied communities, Russia is intensifying filtering measures, terrorizing the local population. Every day there are reports of mass looting by the Russian military. Cars are stolen, and property is taken from houses in trucks.

In his Telegram channel, the so-called «head of the Kherson Region Administration» collaborator V. Saldo announced that the referendum will be held in the period from September 23 to 27. He also considers it necessary to form volunteer battalions on the territory of the Kherson region to participate in the «special military operation» of the Russian Federation on the territory of Ukraine. According to Operational Commander «Pivden», the occupiers tried to establish crossings across the Dnipro in the area of ​​Nova Kakhovka and Kozatske, but they were destroyed by the Armed Forces of Ukraine. A barge loaded with equipment and Russian soldiers was also sunk.

UKRAINE: «The initiative belongs to Ukraine»: Zelenskyy spoke about the situation on the front lines

Minus 300 occupiers, a plane and 7 unmanned aerial vehicles: the General Staff announced the updated losses of the Russians for the day

The Armed Forces of Ukraine repelled enemy attacks in the areas of the settlements of Vesele, Kurdyumivka, Mykolayivka Druga, Bakhmutske, Zaitseve, Mayorsk, Pervomaiske, Maryinka, and Novomykhailivka

The Armed Forces of Ukraine destroyed a column of Russian vehicles trying to cross the river in the Kherson region: about 200 invaders were eliminated

The Russians fired at the ZNPP: the communication equipment of one of the power units was damaged

Russia intends to call up 300,000 reservists for the war against Ukraine

Erdogan wants to end the war diplomatically: the President of Turkey addressed international organizations and countries of the world at the UN General Assembly

Macron: the war in Ukraine should not be a conflict to which people remain indifferent

He stated this during the general debate of the 77th session of the UN General Assembly in New York, writes Ukrinform.

He said that those who want to pursue such a policy of «non-alignment» are making a historical mistake.

«After all, this is a struggle in the name of peace, for the sake of the sovereignty of states, for the territorial integrity of everyone. Those who remain silent today become accomplices of modern imperialism and cynicism,» he noted.

The President of France also stated: «Russia is trying to ensure that the idea of ​​double standards is established today. But the war in Ukraine should not be a conflict to which people remain indifferent.» He emphasized that everyone has a role to play in ending this war.

«This war, which was unleashed by Russia, despises the principles that are the basis of our organization, the principles of the only possible world order. After all, the only thing that can guarantee peace is respect for national sovereignty and the inviolability of borders,» Macron noted.