22 September: The return of heroes, the world about the mobilization of Russia 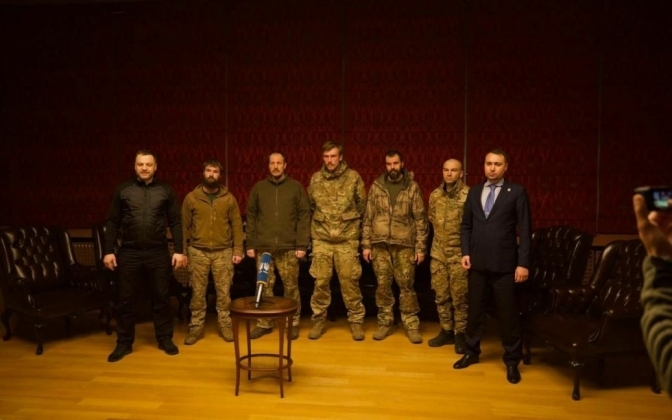 Our HEROES in Turkey/ Ministry of Internal Affairs of Ukraine

Over the past day, units of our troops repelled enemy attacks in the areas of Zaitseve, Odradivka, and Nova Mykhailivka settlements.

Aviation of the Defense Forces struck enemy positions. It has been confirmed that 21 areas of concentration of manpower and military equipment of the enemy, four strongholds, 15 positions of anti-aircraft missile systems have been hit.

In the Svatove district, in order to hide the engineering equipment without witnesses, the occupiers forcibly evicted the residents of the Honcharivka and Kuzemivka settlements. In the temporarily occupied territories of Ukraine, the military-political leadership of the Russian Federation also announced partial mobilization.

The region remains without gas and partly without water and electricity. In one day, five civilians were killed and 13 wounded in the Donetsk region.

During the day yesterday, the Russians shelled three border communities – Bilopillia, Seredyno-Budsk, and Shalyhyne. A total of 38 «arrivals» and three machine gun rounds were recorded.

Yesterday evening, the enemy fired mortar fire (15 «arrivals») on the outskirts of the village of Atynske. The warehouse of the Athens Psychoneurological Boarding School caught fire from shell bursts and nearby buildings were damaged.

Seredyno-Budsk community: Russian soldiers shelled the outskirts of Seredyno-Budsk (13 «arrivals») with artillery. The substation and power grid were damaged. Fortunately, in all cases, people were not injured.

Yesterday evening, the occupiers fired on the Kyiv district of Kharkiv with small arms fire; seven garages on the territory of the garage cooperative were destroyed. There was a fire. There are no casualties.

On the territory of the region, the Chuhuiv, Izyum, Kupiansk and Kharkiv districts suffered from enemy shelling. Residential buildings, farm buildings were damaged. In the Chuhuiv district, the upper lock of the Pechenihy dam was damaged as a result of a rocket attack. The situation at the facility is under control, there is no threat of a dam breach.

According to the Center for Emergency Medical Assistance, five people, including a 13-year-old boy, were injured in the Kupiansk district. Doctors assess his condition as serious. One person was injured in the Kharkiv district.

Near the village of Hrakove during repair work, two people were blown up by a mine, one of them died, one was injured.

The enemy again attacked the Nikopol and Kryvyi Rih districts. One person died in Nikopol. In the city, 17 high-rise and private buildings, gas pipelines, power lines, two hospitals, a school, a football field, several administrative buildings, several shops, a market, and ceilings on the avenue of memory were damaged.

A two-story building was on fire in the morning in Kryvyi Rih. The flames have already been extinguished. No one was hurt.

At night, Mykolayiv was subjected to massive rocket fire, mainly by S-300 anti-aircraft missile systems. As a result of the shelling, multi-story buildings were damaged, windows were broken, gas pipelines, water pipes, cinema and theater courtyards, and administrative buildings. Also, as a result of nighttime rocket fire, a warehouse fire broke out. Previously, there were no victims or victims. Detailed information is being clarified.

This morning in the village Kalynivka of the Voskresensk community, a post office fire broke out as a result of rocket fire. Without victims and victims.

Yesterday afternoon and tonight – shelling of the outskirts of the village of Nova Oleksandrivka of the Ingul community. The villages of Shyroke and Chervona Dolyna were shelled tonight and this morning, outside the population centers. There were no injuries or damage.

There were also attacks on the Kutsurub community; the enemy fired artillery at the coastal zone of the town of Ochakiv, as a result of which a fire broke out on a tugboat. There are no casualties.

Also, according to the information of Operational Commander «Pivden», during September 21, rockets attacked the area of ​​the National Historical and Archaeological Reserve «Olvia» in the direction of Parutyne three times. Without victims and victims.

Villages located on the dividing line of the Berezneguvate community remain under constant fire. There are no casualties. Information on damaged residential buildings is being clarified.

The situation in the region remains difficult, hostilities continue. Myrolyubivka, Petrivka, Osokorivka, Novovoznesenske, Potemkine and Arkhangelske came under enemy fire. There is destruction among the civil infrastructure, some settlements remain without water and electricity, which cannot be restored due to fasting their shelling.

According to the information of Operational Commander «Pivden» in the sky above Charivne, in the Kherson region, an enemy Su-25 attack aircraft was destroyed.

Our aviation made seven strikes on the enemy, and missile and artillery units carried out more than 210 fire missions. In particular, the command post of the enemy troops in the Beryslav district, forces and equipment centers in the Havrylivka and Chornobayivka areas, the Daryiv bridge and the pontoon crossing near Novaya Kakhovka were affected. Also, in Nova Kakhovka, fire control stopped the repair work on the bridge and damaged a column of military equipment that was preparing for crossing the Dnipro.

Systematic abduction of people in occupied settlements of the region, seizure of premises continues. According to the order of the so-called «Minister of Education and Science of the Kherson region», in connection with the plans of the occupiers regarding the referendum, holidays have been announced in educational institutions from September 22 to 28.

UKRAINE: A cruise missile, a helicopter and minus 400 occupiers: the General Staff announced the losses of the Russian Federation in Ukraine during the day

The occupiers shelled Avdiivka with tanks and artillery, and rockets hit Kramatorsk

215 Ukrainian soldiers were freed from captivity, including leaders of the «Azov» regiment. Medvedchuk headed in the other direction

«Putin is in the trenches!»: a mass rally against mobilization and war gathered in Moscow

Mobilization in Russia: Lithuania has put its troops on high alert

The topic is sanctions against Russia: Borrell announced an emergency meeting of the foreign ministers of the EU countries

President Volodymyr Zelensky said that the five commanders of the defenders of Mariupol will remain in Turkey until the end of the war. Such were the terms of exchange.

Defense commanders of «Azovstal» Denys Prokopenko «Redys», Serhii Volynskyi «Volyna», Svyatoslav Palamar «Kalyna», Denys Shlega and Oleg Khomenko will be in Turkey under the personal protectorate of Erdogan and in comfortable conditions.

They will also have the opportunity to hold personal meetings. In particular, with families.

«Ukraine agreed with Turkey, I spoke with President Erdoğan, that our 5 commanders who are released from captivity will be in complete safety in comfortable conditions and under the personal protection of the President of Turkey for the time until the end of the war. But we will ensure the opportunity for their families to see them.», – noted Zelensky.