23 September: Why does Russia need Medvedchuk? Zelensky’s speech to the Russians 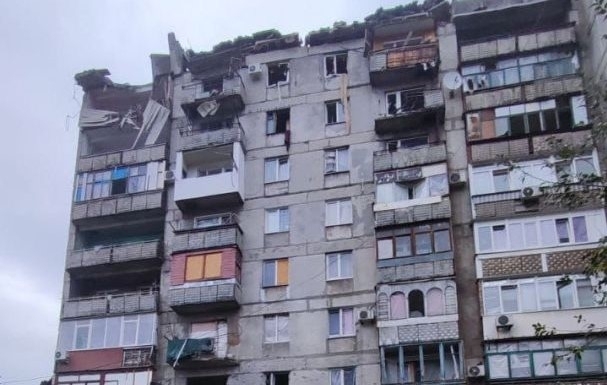 During the day, units of the Defense Forces repelled enemy attacks in the areas of Kupiansk, Spirne, Mayorsk, Zaitseve, Avdiivka, Nova Mykhailivka, Opytne and Kamianka settlements. Aviation of the Defense Forces hit 25 areas of concentration of enemy manpower and military equipment and six positions of anti-aircraft missile systems. On September 22, missile troops and artillery inflicted fire damage, in particular, on control points, areas of concentration of personnel and military equipment, air defense positions, and ammunition warehouses.

Preparations for the «referendum» continue in the temporarily occupied territories.

At night – shelling of the village of Hostre. A residential building was destroyed, one person was injured. Also shelling Mariinka, Krasnohorivka, Georgiivka, Nova Mykhailivka. Information about the victims is being clarified. Yesterday evening – C300 along Slovyansk. No victims. There was also a rocket attack on Toretsk, the 9th floor was significantly damaged, but fortunately there were no victims – most people were evacuated, one person was injured.

In one day, seven civilians were killed and 17 were wounded in the region. The region remains without gas and partly without water and electricity.

Over the past day, the enemy carried out 11 attacks on 10 border communities. About 130 arrivals were recorded. 10 communities came under fire: Shalyhyne, Velyka Pysarivka, Bilopillia, Krasnopillia, Znob-Novgorod, Esman, Khotyn, Yunakiv, Seredyno-Budsk and Myropillia. Four civilians were injured, and two dozen houses and seven vehicles were damaged. Two businesses, a school, a kindergarten and a village cultural center were also damaged.

Yesterday, the enemy continued to terrorize the civilian population of Kharkiv region, shelling settlements adjacent to the contact line and the border with the Russian Federation. Yesterday Kupiansk was heavily shelled. There are victims, including children. According to the Center for Emergency Medical Assistance, three people were injured in Kupiansk, including two children – a boy and a girl, seven years old. Doctors assess their condition as moderate.

The Russians shelled the Nikopol district again. In the morning they covered Nikopol and Marhanets with «Hrad» and heavy artillery. In Marhanets, according to preliminary information, two people died. Nine more people were injured. In Marhanets, one house was destroyed, eight were damaged. The city is partially without light. In Nikopol, 10 houses were previously damaged. Employees of the State Emergency Service and the police are working at the site of the shelling.

Explosions rang out in Mykolayiv at night. Previously, the office building of the industrial infrastructure facility was damaged. Private houses, water supply and electricity networks were also damaged. Detailed information is being clarified. The Berezneguvat community remains under constant fire.

During the past day, there were enemy attacks on the outskirts of the village Nova Ukrainka. Vysunsk was shelled, as a result of which infrastructure objects, private houses, three trade objects and a gas pipeline were damaged, with subsequent ignition. There are no casualties. Shelling of populated areas of Shyroke community continues. Yes, yesterday there was shelling of the village. Wide. A residential building, non-residential outbuildings and agricultural machinery were damaged. The village of Chervona Dolyna was also shelled late in the evening. Hits were recorded in open areas. There are no casualties.

The situation in the region remains difficult. Fighting continues. According to the information of Operational Commander «Pivden», marines destroyed an enemy Mi-24 helicopter in the Kostromka area. Two Orlan-10 UAVs were also destroyed. The Ukrainian Armed Forces stopped the occupiers’ attempts to move across the Dnipro, fire control stopped their attempts to cross the Kakhovska dam and cross the barge from Kherson. Our aircraft carried out 21 strikes, and missile and artillery units carried out almost 280 fire missions. In particular, command posts in Kherson, control posts in Nova Voskresenka and Dudchanakh, ammunition warehouses, areas of accumulation of enemy weapons, equipment and manpower.

Information appeared in the Russian mass media that Deputy Head of the Administration of the Russian Federation S. Kiriyenko arrived in Kherson to prepare for the «referendum». In addition, the official is going to launch a «revival leaders» contest in the city, which was arranged, as it is stated, for «forming a new elite of the region.»

UKRAINE: The actual losses of the Russian army amount to more than 100,000 killed and wounded

Russia exchanged Viktor Medvedchuk, because it was through him that the financing of Russian intelligence networks in Ukraine went

Ukrainian aviation made 13 strikes against the enemy.

«Certain processes are already starting in the Kremlin»: Danilov explained why Putin dared to announce the mobilization belatedly

WORLD: In Russia, military commissars and local administrations are burning en masse after the announcement of mobilization

Danilov commented on the mobilization in Russia: the resource of those willing to fight in Ukraine has been exhausted

The Kremlin announced a partial mobilization in the country, as well as a large-scale exchange of prisoners in one day, to downplay the value of the exchange – ISW

The number of IAEA representatives may increase at the Zaporizhzhia NPP

The President of Ukraine, Volodymyr Zelensky, in his traditional evening address spoke about the mobilization in Russia. He advised mothers of Russian soldiers not to send them to war.

Volodymyr Zelensky addressed Russians who are subject to «partial» mobilization. He suggested that they not add to the lists of those killed.

The corresponding video appeared on his page in the social network.

Volodymyr Zelensky addressed the Russians in Russian. He drew attention to the fact that there were small protests in Russian cities the day before. And he noted that thanks to Ukrainian intelligence, he knows the real mood of people in the regions of Russia.

«We see that people in Dagestan, Buryatia, other national republics and regions of Russia understand that they were simply abandoned. Thrown to death. Why, for example, Dagestanis or anyone else should die in the Kharkiv region or near Donetsk? But because one person in Russia decided so for all citizens of Russia. There is no other reason. That’s what he wants. You are already complicit in all these crimes, murders and torture of Ukrainians. Because you were silent. Because you are silent», Volodymyr Zelensky emphasized.

Separately, he added that now is the time for the Russians to make a choice. For men from the Russian Federation, it is a choice: to die or to live, to become a cripple or to preserve health. For women in Russia, the choice is to lose husbands, sons, and grandchildren forever, or to try to protect them from death.

«Just think about the number of people they want to take away. We know for sure that summonses for 300,000 people were printed and signed in advance, even before this decision on mobilization appeared. Our intelligence proved it. But the Russian leadership is preparing to recruit up to a million men into the army – this is the main thing that they are keeping quiet about now,» the President of Ukraine emphasized.