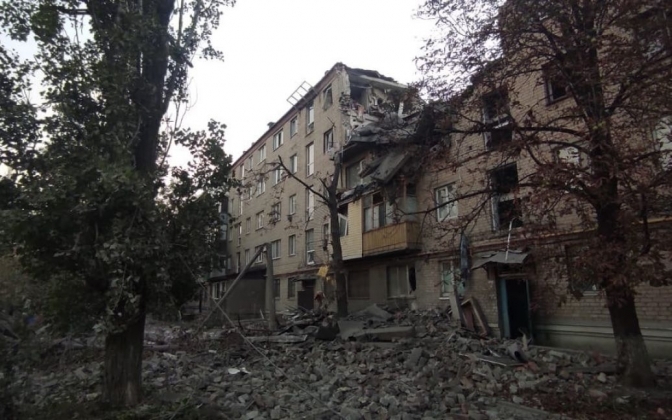 The occupiers are in a hurry because they see the successes of the Armed Forces in the Kharkiv region. Every day Luhansk is getting closer. Closer for the Armed Forces – the Russians are losing confidence.

During the day, units of the Defense Forces repelled enemy attacks in the areas of Spirne, Soledar, Bakhmutske, Odradivka, Kurdyumivka, Zaitseve, Mayorsk, Kamyanka, Avdiivka and Opytne.

Over the past day, two people were killed and three were injured in the Donetsk region.

Over the yesterday, almost 140 arrivals from the Russian side in the Krasnopillia, Bilopillia, Seredyno-Budsk, Yunakiv communities were recorded in the border regions. At night – no shelling.

Over the past day, the Russians shelled settlements located near the border with the Russian Federation and the contact line. The Kupiansk district suffers the most from shelling. Over the past day, five people were injured there, including two children aged 10 and 17. In the Chuhuiv district, a man was injured by a landmine. A similar accident happened to a 24-year-old resident of the Izyum district, who was picking mushrooms.

During the past day, pyrotechnics of the State Emergency Service defused 578 explosive objects in the territory of the region.

The enemy again shelled the Nikopol district. In the morning, the Russians hit the Marhanets and Chervonohryhorivka communities with «Hrad» and «Hurricane».

Two people were injured in Marhanets. In the city, 23 private and high-rise buildings, 10 commercial buildings, a bakery and several institutions were damaged. More than 10 cars were mutilated, several were burned. More than 2,000 subscribers were left without electricity due to shelling.

No people were injured in the Chervonohryhorivka community.

Mykolayiv came under fire after midnight today. It is known that it hit the water area of ​​the Pivdennyi Buh River. Previously, there were no victims or victims.

During the night, the enemy launched two rocket attacks on the village of Kalynivka. After the shelling, a gas pipe caught fire, three residential buildings were damaged, and no one was injured. The shelling of the territory and nearby settlements of the Bashtan community continues.

At night, the surroundings of the village Yavkino were shelled, as a result of shelling, buildings were destroyed and a car caught fire. Also at night – shelling of the outskirts of the village. It’s encouraging. There are no casualties. Information on damaged residential buildings is being clarified.

Also at night there were shelling of the outskirts of the village of Nova Oleksandrivka of the Ingul community. There were no injuries or damage.

The village was shelled this morning. Wide beyond the boundaries of the settlement, hitting mainly open areas and road surfaces. There were no injuries or damage. Villages located on the dividing line of the Berezneguvate community remain under constant fire. Information on victims and damage is being clarified.

The situation in the region is extremely difficult, hostilities continue. The occupiers are trying to hold a fake referendum on joining the Russian Federation in the region. For this purpose, people are brought in en masse from Crimea to vote, local residents are forced to «vote» at gunpoint. Propaganda mass media are shooting stories about a kind of «active participation of local residents in voting.» Also against this background, the Russians are strengthening the administrative-police regime and continuing to put pressure on the Kherson people.

According to the information of Operational Commander «Pivden», 13 strikes were carried out by our aircraft at the enemy, and about 280 tasks were carried out by missile and artillery units. In particular, control points in Beryslav and Nova Kakhovka, 3 enemy forces and equipment centers in Kherson and Kakhovka districts, and a warehouse with ammunition in Beryslav district were affected.

Reports are coming from Kherson, Oleshok, Nova Kakhovka and villages of the Beryslav district about mass abductions of cars and trucks by Russian servicemen, as well as robberies by the occupants of houses. The occupiers are taken from the houses anything that has any value.

UKRAINE: During the day, the Armed Forces eliminated more than 200 invaders, destroyed 8 tanks and shot down an enemy plane

New deaths in Donetsk region due to shelling: Russians use thermobaric ammunition against civilians

New mass graves were discovered in Izyum, which began to be demined for research

The ambassador of Iran has been stripped of his accreditation in Ukraine: the response of the Ministry of Foreign Affairs to strikes by Iranian drones

«Iran has decided to support the killing of Ukrainians»: Podoliak on providing Iranian drones to Russia

50 heroes die every day – Zelensky made the number public

WORLD: Putin personally did not allow his troops to retreat from Kherson and ruined relations with commanders – NYT

Biden on the «referendums» of the Russian Federation: the USA will never recognize the territory of Ukraine as Russian

In Russia, they will not be able to create a mobilization reserve of even low quality – ISW

Due to the war in Ukraine, the President of the European Council called for the suspension of Russia’s membership in the UN Security Council

So the star of the 70s, Alain Delon, appeared in public for the first time since 2021 the other day to support Ukraine.

The iconic French actor visited the Embassy of Ukraine in Paris. Alain Delon recorded a large program about Ukraine, which will be released at the end of September on the TV5Monde channel.

And in an interview with the BFMTV channel, Delon expressed his solidarity with Ukrainians: «What is happening in Ukraine has deeply saddened and moved me, so I am fighting for Ukrainians,» the artist said.

In addition, the legend of French cinema is quoted by heart lines from Taras Shevchenko’s «Testament». However, he did it in French.