25 June Summary: More than 40 missiles per night, over fulfilled plan to raise money for Bayraktars 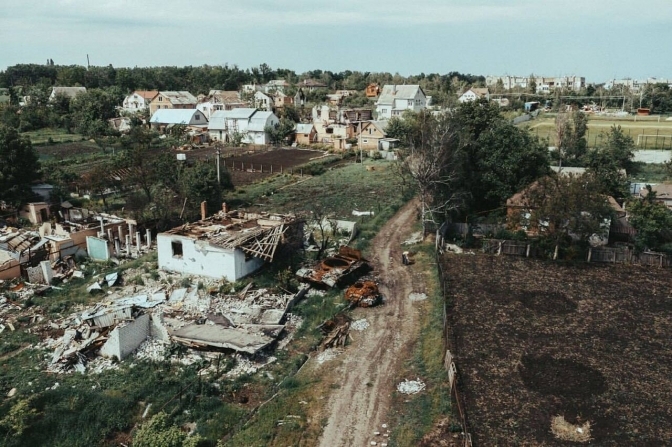 The racists attacked the Severodonetsk industrial zone, tried to enter Lysychansk from the south and block the city. An air strike was launched in Lysychansk. Severodonetsk suffered from artillery. In particular, the villages of Synetsky and Pavlograd, the territory of the Severodonetsk association «Azot ‘‘ and «Skloplastyka». Vovchoyarivka, Bilohorivka and Loskutivka were also shelled. In the areas of Metelkino, Sirotino and Voronovo, the Russian army is carrying out assault operations to oust Ukrainian military units from these areas. In Lysychansk, two people were killed and three were injured, including two children.

During the night, artillery and mortar shelling continued at the positions and settlements of the region. Artillery shelling was recorded in the town of Maryinka, the town of Krasnohrivka, the village of Novomykhailivka, Avdiivka (at night – the central city hospital, about 4 am – the central part of the city) and the city of Ukrainsk. During the day, shelling was carried out from small arms, tanks, artillery, mortars, MLRS «Hrad», MLRS «Uragan», and there was a strike by a missile S-300. Under enemy fire Avdiivka (railway traction substation), Bakhmut, Krasnohorivka (residential sector), Kurakhove (Electrostal plant), Ukrainsk, Hrodivka village, Bogdanovka, village Karlivka, village Pervomaiske, village Pivden. Five civilians were killed and four were injured.

Today at four in the morning, several missile strikes were fired at a military facility in the Yavoriv region. Two missiles were shot down. Information on the consequences and victims is being clarified.

Today, during an air raid, our military shot down two missiles. The debris fell in a forest in Kamyanets-Podilskyi district. No one was injured. The wreckage of another rocket fell in the village garden of one of the territorial communities of Khmelnytsky district. No one was killed or injured. Windows and doors in several residential buildings were damaged.

Last night, Russian shells hit the infrastructure in the Kyiv district of Kharkiv, burning office space. There was also a fire in a private house. There are no previous victims. At around 5 a.m., shelling resumed in Chuhuiv and the Chuhuiv district. Private houses and outbuildings were on fire. An 85-year-old woman was hospitalized. In total, five people were injured in the region during the day. One person died in Balaklia.

This morning, the enemy launched a massive missile strike on the village of Desna. There is destruction of infrastructure. There are no previous victims. The information is being clarified.

At 4:15 a.m., multiple missile strikes caused minor damage to infrastructure. There is information about one dead and one wounded.

In the Dnipropetrovsk region, the enemy again fired on the Kryvyi Rih district, which borders the Kherson region. Two communities – Shyrokiv and Zelenodolsk. There is housing destruction in the Zelenodolsk community. An elderly woman was injured.

This morning the city came under heavy shelling. Information on the consequences is being clarified.

Bashtanskyi district: shelling continues in the Bereznehuvatskyi community. The shelling of villages along the demarcation line also continues. Information on victims and injuries is being clarified.

In the Mukolayiv area this morning with. The Pervomaisk community came under fire, resulting in significant damage to buildings and an electric transformer.

Also this morning, the village of Lymany in the Halytsyn community came under fire. The consequences are being clarified.

For 26 days the residents of the region have been without mobile and Internet connection, the situation is only getting worse every day, in particular, it is becoming more and more difficult to withdraw pensions and salaries from cards. Great pressure continues on educators and doctors. Local collaborators are announcing preparations for the new school year, which will be under the new Russian program, with new textbooks and teachers. Since the beginning of July, the work of medical institutions under the leadership of Russia has been announced. Kherson region remains in critical condition.

UKRAINE: Last night the Russian occupiers fired about 40 missiles across the territory of Ukraine: «They wanted to make Ukrainians afraid of their « Z-monsters»« – Podoliak about the night missile attack of the Russian Federation

Moldovan President Maya Sandu is going to come to Kyiv

This is not a slap in the face to Moscow, this is applause from Ukraine: Zelensky on EU candidacy

«It will be, and soon»: Kuleba said that Ukraine is working to speed up the process of arms supply

The Canadian Parliament has passed a law confiscating Russian assets: they can be transferred to Ukraine

NATO Secretary General Jens Stoltenberg believes that Russia’s war against Ukraine is likely to end at the negotiating table. The volunteer hoped that in seven days the Ukrainians would be able to raise 500 million hryvnias for three Bayraktars. However, as Prytula admitted, the plan was overfulfilled.

In just one day, they managed to raise money for two Bayraktars, and in three days, the Ukrainians raised four.

«The fourth is not superfluous. Incredible Ukrainians have exceeded the plan for «Bayraktar». I thank everyone who joined the project «People’s Bayraktar»! It really was a project that united everyone regardless of age, gender or religion! I love you all and I’m proud that I breathe the same air with you! Our team went to prepare an even more solid story for you,» Prytula said.