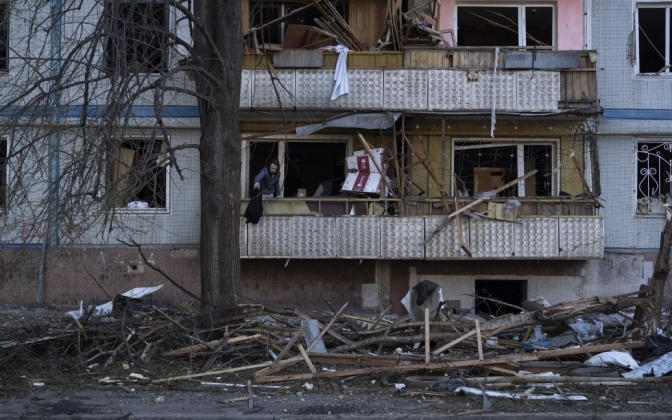 Russian attacks on our positions near Dibrova and Stelmakhivka were repulsed. The enemy is defending in the Kupiansk and Lyman directions. The districts of Makiivka, Novoselivske, Stelmakhivka and Ploshanka suffered fire damage from the Russians. Near Novoselivske, the occupiers used an attack UAV.

In total, the enemy fired 70 shots at the positions of the Luhansk region’s defenders from various types of weapons and carried out two airstrikes.

Tonight there was an S-300 missile attack on Drobyshev. In the morning, the shelling of the village of Bakhmutske, the outskirts of Soledar and Avdiivka resumed. Information about the victims is currently being clarified. Yesterday, the Russians shelled the residential sector of Avdiivka from rotorcraft; carried out a missile attack on Slovyansk with a S-300 missile; Bakhmut, Vuhledar, Mariinka and Krasnohorivka, villages were covered with artillery. Torske and Zarichne.

In a day in the Donetsk region: two wounded civilians. Mykolayivka: at night, the enemy attacked the port water area and the settlement of Ochakivska community with anti-aircraft missiles, as a result of which one person received a concussion. Residential buildings were damaged, including one high-rise building. Details on the consequences are being worked out.

At night, the Russians attacked Kupiansk. As a result of the shelling, there was a gas leak with subsequent burning. There were no injuries.

The occupiers continue to fire artillery at settlements in the border areas of the region: Kupiansk, Kharkiv, Chuhuiv.

Yesterday afternoon, the city of Vovchansk was hit by artillery, a residential building and farm buildings were damaged. A 66-year-old man was injured and hospitalized. In Vovchansk, a man was blown up by a mine, received shrapnel wounds, and was hospitalized.

At night, the enemy attacked the suburbs of Zaporizhzhia several times. The rockets hit near the hospital. Fortunately, no one was hurt. A mutilated building. Detailed information on the consequences of shelling is being clarified.

32 reports were received about the destruction of houses (apartments) of citizens and infrastructure objects as a result of shelling by Russian military personnel.

At night, the occupiers shelled Nikopol again. Shots were fired from «Hrad» and heavy artillery at Marhanets and Nikopol communities. People were not injured.

Employees of the State Emergency Service are examining the affected areas. Detailed information on the consequences of shelling is being clarified.

The situation in the region remains difficult. According to the information of the Armed Forces, the enemy used artillery of various calibres to shell Mykhailivka, Kachkarivka, Mylove, Beryslav, Zmiivka, Ivanovka, Tokarivka, Mykilske, Bilozerka, Antonivka, Veletenske, Chornobayivka, and the city of Kherson itself.

Liberated Kherson under constant fire from the Russian military. On November 24, around 17:00, Russian invaders with artillery and MLRS set fire to the residential area of ​​the city.

A high-rise building caught fire due to shelling. Enemy shells also hit the children’s playground. As a result of the shelling, 21 were injured and seven were killed. Missile launches continue around the clock from the territory of the Lyubymivka community of the Kakhovka district.

In Novotroitske community, the occupiers are setting up an additional hospital in the building of the Employment Center. In the premises of the executive service, a so-called «state reserve» – ​​looted property, food, taken from local farmers for the purpose of further export to the temporarily occupied territories of Crimea. The Kherson region continues to receive aid from various regions of Ukraine.

In Kherson region, specialists of mobile operators have restored the operation of one more base station.

UKRAINE: The total losses of the Russian Federation exceeded 86,000: during the day, the Armed Forces liquidated another 430 occupiers

In one day, the occupiers set fire to 17 settlements in Donetsk region alone

WORLD: Lukashenko demands that Ukraine enter into negotiations with Putin and threatens «destruction» in case of refusal

The General Staff of the Armed Forces of Ukraine urgently appealed to the people of Belarus: «Special services of the Russian Federation are preparing provocations on your territory.»

About 15,000 Belarusian soldiers are ready to fight against Ukraine – General Staff of the Armed Forces of Ukraine

Ukraine will buy electricity from the EU – head of Ukrenergo

The presenter shared an emotional video.

Ukrainian journalist and presenter Dmytro Gordon shared with his fans a video where a cardiac surgeon had to perform an operation on a child’s heart during a blackout.

On his Instagram page, Gordon posted a video shot by the famous Ukrainian heart surgeon Boris Todurov in the operating room. Together with his colleagues, he was performing an operation on a child’s heart, as at that moment the lights were turned off due to shelling by the Russian occupiers of the Ukrainian thermal power station.

«Outstanding Ukrainian cardiac surgeon Boris Todurov, together with his colleagues, performs heart surgery on a child without electricity. Thank you, Russian «liberators», for your wonderful friendly rockets! Hell cries for you,» Gordon captioned the video.