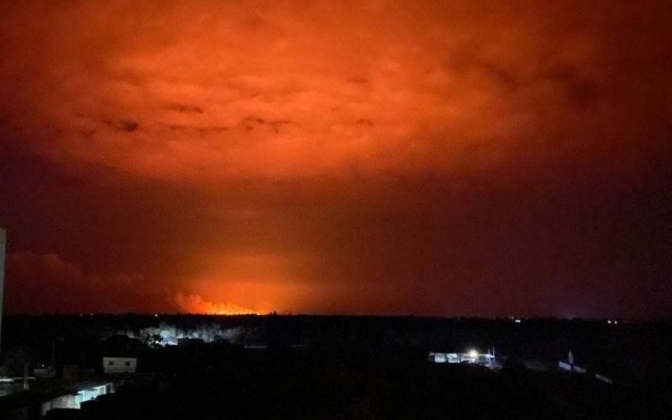 During the day, the enemy shelled 30 settlements along the contact line. During the night, 14 mortar and artillery shells were fired at the positions of the defenders of the Luhansk region. Once the enemy used aviation.

In the morning – intense shelling of Toretsk. A private house is on fire. Information about the victims is being clarified.

At night, the enemy attacked Odesa with kamikaze drones. One drone was destroyed by air defense forces. Two hit the object of military infrastructure.

As a result of a large-scale fire and the detonation of ammunition, the evacuation of the civilian population was organized. Previously, there were no casualties. Firefighting and rescue operations are ongoing. Information about the consequences is being clarified.

According to the regional Center for Emergency Medical Assistance, 6 people were hospitalized during the day. All victims are in average condition.

The Nikopol district again suffered from enemy shelling, the Russians shelled it nine times. Four communities came under attack – Nikopol, Marhanets, Chervonohryhorivka and Myrove. Previously, there were no casualties or injuries.

In Nikopol, almost 40 private houses, more than 20 farm buildings, 30 solar power plant panels, a transformer substation and power lines were damaged. Specialists are currently working in other communities, and the scale of the destruction is being determined.

Mykolayiv came under fire after midnight today. It is known that it hit the water area of ​​the Pivdennyi Buh River. Previously, there were no victims or victims.

During the night, the enemy launched two rocket attacks on the village of Kalynivka. After the shelling, a gas pipe caught fire, three residential buildings were damaged, and no one was injured. The shelling of the territory and nearby settlements of the Bashtan community continues.

At night, the surroundings of the village Yavkino were shelled, as a result of shelling, buildings were destroyed and a car caught fire. Also at night – shelling of the outskirts of the village. It’s encouraging. There are no casualties. Information on damaged residential buildings is being clarified.

Also at night there were shelling of the outskirts of the village of Nova Oleksandrivka of the Ingul community. There were no injuries or damage.

The village was shelled this morning. Wide beyond the boundaries of the settlement, hitting mainly open areas and road surfaces. There were no injuries or damage. Villages located on the dividing line of the Berezneguvate community remain under constant fire. Information on victims and damage is being clarified.

The situation in the region is difficult, hostilities are ongoing. According to the information of Operational Commander «Pivden», our aircraft carried out 5 strikes on two enemy air defense systems in the Kherson and Kakhovka districts, on three areas of concentration of weapons and equipment in the Beryslav region.

Fire control has been strengthened in the area of ​​the Kakhovka HPP, where the occupiers are trying to establish crossings. Also, three enemy control points were destroyed, the location of the Russian Guard in Kherson was damaged, and one of the enemy’s strongholds in the Davydove Brody area was suppressed. Enemy ammunition depots in the Kherson and Beryslav districts were destroyed. The pseudo-referendum on joining the Russian Federation of the Kherson region continues. Local residents ignore him in every possible way. That is why the armed occupiers go to the homes of Kherson residents to «vote».

UKRAINE: Minus 4 helicopters, 1 plane and 500 occupiers: the General Staff named the losses of the Russian Federation in Ukraine for September 25

The Armed Forces of Ukraine destroyed 6 control points, units of missile forces and warehouses with ammunition in a day – General Staff

Ukraine received NASAMS systems: Zelensky said that they are not enough

WORLD: After the announcement of mobilization, 261,000 men fled from Russia – mass media

«A very dangerous war»: Scholz explained why he does not want to give battle tanks to Ukraine

If the USA transfers tanks to Ukraine, the EU countries will also do so – Zelensky

Torture and rape of children in front of their relatives: UN investigators voiced evidence of Russian atrocities in Ukraine

Sexual violence and executions – for the first time the real facts of Russian war crimes in Ukraine were testified by experts from the UN.

An independent international group of investigators visited four regions liberated from the Rashists and was shocked, TSN reports.

«We were struck by the large number of executions in the areas we visited,» says the head of the Independent International Commission of Inquiry on Ukraine, Eric Möze.

What the Russians did in Ukraine shocked the most experienced UN investigators. For the past few months, an international group of experts has been working in the liberated territories under the mandate of the organization’s highest human rights body. The first conclusions were presented at a meeting in Geneva. It is noteworthy that the perpetrators of the meeting of the Russian delegation were not present at it. «Based on the evidence collected by the commission, we came to the conclusion that war crimes were indeed committed in Ukraine,» Miose assured.

During this time, the investigators managed to visit 27 cities and towns in Kyiv region, Chernihiv region, Kharkiv region and Sumy region. And they interviewed about one and a half hundred victims who were mocked by the occupiers. Beatings, electric shocks and forced stripping naked in remand cells. This is not yet a complete and not the worst list of atrocities. «The victims were previously detained, there were visible traces of torture on their bodies, their hands were tied, they had gunshot wounds to the head and their throats were cut,» the commission states.

The commission will once again testify that any assurances by Russia that they do not touch civilians should not be believed. «A number of attacks that we investigated were carried out without distinguishing between civilians and combatants. We are talking about strikes with cluster munitions or rocket salvo systems and airstrikes on populated areas,» Miose insists.

In the list of war crimes of the aggressor, a separate item – on a sexual basis. According to the UN, the youngest Russian victim is only 4 years old, the oldest is 82. «The commission documented cases of rape, torture and illegal imprisonment of children. There are examples of cases when relatives were forced to witness crimes,» the commission said.