28 September: Heroes of Azov will meet their relatives. Details about mobilization in Russia 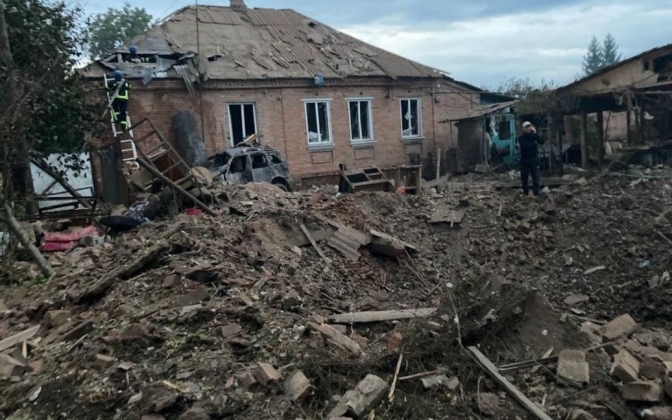 The enemy made 16 artillery and mortar strikes on our positions. Used aviation once.

During the past day, the aviation of the Defense Forces of Ukraine made 17 strikes on the enemy. It was confirmed that 14 areas of concentration of manpower and military equipment, 3 strongholds and 7 positions of anti-aircraft missile systems were hit. In addition, during the day, the Ukrainian air defense units destroyed the plane, 6 UAVs and the Kh-59 guided air missile of the enemy.

At night – shelling along the front line. In the morning – a rocket attack on the city of Mykolayivka. A direct hit to the school, where a shelter was arranged for local civilians.

At the time of the impact, there were 12 people in the warehouse, including two children and a person with disabilities. Currently, there is no information about one person, the search for him continues. Five people died and 10 were injured in the Donetsk region in a day.

Yesterday evening, the Russians opened fire from grenade launchers on the territory of the Krasnopillia community. A total of 40 arrivals. Previously – without victims and destruction.

At night, the enemy shelled the Kholodnohirskyi district of Kharkiv; previously – with S-300 air defense missiles. Damaged objects of critical and transport infrastructure. No casualties.

During the day, the occupiers struck the Kupiansk, Izyum, Kharkiv and Bohodukhiv districts of the region. The populated areas of Kupiansk district suffer the most from shelling.

According to the information of the Regional Center of Emergency Medical Assistance, 5 people were hospitalized with injuries during the day in the Kupiansk district. One person was injured in Bohodukhiv district.

At night, the enemy struck a new blow at Nikopol region. Fired from «Hrad» and heavy artillery. No casualties or injuries.

In the Marhanets community, the consequences of the shelling are being clarified. Representatives of the State Emergency Service and the police are working on the spot.

Our defenders shot down a Russian Kh-59 missile in the Kryvyi Rih district the night before.

Tonight, Mykolayiv was again hit by rocket attacks, primarily by S-300 anti-aircraft missile systems. The industrial zone was hit. Previously, there were no victims or victims.

According to Operational Commander «Pivden», three enemy kamikaze drones were directed at the port infrastructure area of ​​Ochakiv yesterday. All three were shot down by air defense forces.

Villages located on the dividing line of the Berezneguvate community remain under constant fire. Berezneguvate station was shelled in the morning. There were no injuries or damage.

Yesterday evening and this morning, the outskirts of the village of Nova Oleksandrivka of the Ingul community were shelled. There were no injuries or damage.

The situation in the Kherson region remains difficult, active hostilities continue. The enemy shelled Bilousovka, Ivanivka, Holgyna, Arkhanhelske, Osokorivka, Novovorontsovka, and Vysokopillia. Civilian infrastructure has been damaged, and there are wounded.

The occupiers are intensifying filtering measures, in particular, considerable attention is paid to checking the mobile phones of local residents. Cases of kidnapping continue.

According to the information of Operational Commander «Pivden», in the Kherson and Beryslav districts, 4 enemy weapons and equipment and 4 warehouses with ammunition were hit. Another barge was sunk in the Kherson region. Fire control was carried out both on the air defense positions and on the attempts of the occupiers to restore the carrying capacity of the bridge in Nova Kakhovka.

UKRAINE: The Armed Forces repelled the attacks of the occupiers in the area of eight settlements

«Our Korovii Yar»: the Armed Forces entered a settlement in Donetsk region

WORLD: Mobilized Russian soldiers are not given tokens with numbers so that they cannot be identified – Podoliak

In Belarus, military exercises suddenly began at the airfield where Russian aircraft had previously arrived

In the annexed Crimea, the occupiers have already mobilized about 60,000 men

A total of 215 people were returned home from the captivity of the occupiers, including 10 foreigners who have already gone to their families.

Released from Russian captivity, the five commanders-defenders of «Azovstal» will soon be able to see their relatives.

Deputy Head of the Office of the President Kyrylo Tymoshenko announced this on the air of the national telethon on September 28.

Thus, the Ukrainian commanders of «Azovstal» who were released from Russian captivity (Denys Prokopenko «Redys», Serhii Volynskyi «Volyna», Svyatoslav Palamar «Kalyna», Denys Shlega and Oleg Khomenko) are currently in Turkey. With the conditions of exchange in a third country, they will live until the end of the war.