29 July Summary: Ukraine is ready to export grain, mass damage in the regions 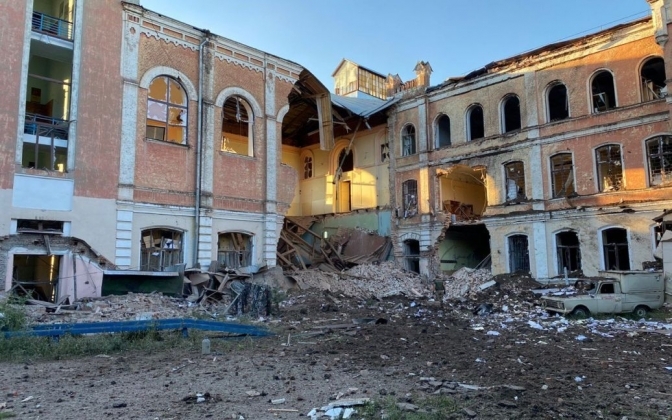 Yesterday, the Russians hit with four missiles, used barrel, rocket artillery and mortars 13 times. The situation in the region remains critical. In Severodonetsk, Rubizhne and Lysychansk, they are trying to demonstrably organize the issuance of pensions. There is no talk of opening banks, let alone ATMs.

The cities and villages of the region, in particular – Avdiivka, Bakhmut, Krasnohorivka, Hirnyk, were fired at from artillery, «Hrad» and «Uragan» anti-aircraft missiles. Kamianka, village Orlivka, the village of New York and others. 10 private residential buildings and 3 high-rise buildings, power lines of Avdiivska Coke Plant were damaged.

Pokrovsk was shelled by rockets at night. The number of victims is being clarified. Shelling of Slovyansk, there were wounded. Information about the injured people and the consequences of the shelling are being clarified. During the day, 8 people died in the region, 19 were injured, 8 high-rise buildings, 13 private houses and 3 entertainment centers were damaged.

This morning and yesterday evening – 2 shelling of the border in the Novgorod-Siverskyi district, artillery, «Hrad’’ and mortars. Without victims and destruction. Other circumstances are being clarified.

On the morning of July 29, the enemy attacked Kharkiv, and the arrivals in the central part of the city were recorded. A two-story building and an educational institution were damaged. Rescuers are working on the spot. Previously, there were no casualties.

Also early this morning, the occupiers shelled the town of Bohodukhiv. An industrial facility was damaged, a fire broke out. During the past day, the enemy continued shelling the Kharkiv, Chuhuiv, Izyum and Bohodukhiv districts of the region. During the day, 7 people were injured in the region, 1 person died from enemy fire – a 26-year-old policeman in Chuhuiv district.

In the morning, an anti-aircraft missile was fired over the settlement of Svitlovodsk district. There are currently no casualties. Details and detailed information about the consequences are being clarified, the investigative and operational group is working.

The Russians shelled the Nikopol and Kryvyi Rih districts. Nikopol was hit by «Hrad». Previously, 6 private houses, garages and utility buildings were damaged. Caught the power grid. Several thousand people are without electricity. Electricians are working. Previously, no one was injured. In the Kryvyi Rih district, the Zelenodolsk community was shelled from barrel artillery. Without victims and destruction.

In the morning, a hit was recorded on the territory between the villages of Dmytrivka and Solonchaky. There were no injuries or damage. Yesterday evening, the enemy shelled Mykolayiv again. The hit was in the yard of private residential buildings. Several buildings were destroyed, others were damaged. The humanitarian aid delivery point was also damaged. Previously, three people were injured.

Also yesterday evening – shelling outside the village of Shyroke. There are no casualties. Shelling of the territory and nearby settlements of the Berezneguvate community continues. Villages located on the demarcation line remain under constant enemy fire. Information about the victims and the destruction of residential buildings is being clarified.

There were many powerful explosions in the region. There are reports of hostilities from almost all settlements. The situation in the communities of Beryslav district is stable. The villages liberated by the armed forces were almost completely destroyed, and the occupiers continue shelling them and the positions of the armed forces in other settlements.

The armed forces of Ukraine will strike the Kerch bridge when they have the opportunity and a corresponding military task is set. This was announced by the Secretary of the National Security Council Oleksiy Danilov

The invaders deny the existence of critical damage to the Antonivskyi bridge, but they have already prohibited movement on it and, according to local telegram channels, have begun erecting pontoon crossings.

WORLD: Ukraine is ready to export grain, but is waiting for a signal – Zelensky

US Ambassador Bridget Brink during a visit to the Odesa port: «It is important that Russia allows the export of this grain»

Poland supports initiatives of partners regarding sanctions against Russia, this also applies to visa restrictions for Russians introduced by the government of Estonia

Secretary of State Blinken must convey a strong message to Russian Minister Lavrov about the inadmissibility of the annexation of new territories of Ukraine, as well as about the consequences that the Russian Federation will expect for this

Iran is increasing the production and export of drones, which Russia is interested in, according to American intelligence

During a telephone conversation with US President Joe Biden, Chinese leader Xi Jinping warned him against «playing with fire» by interfering in the affairs of Taiwan, which China considers its territory.

Minister of Foreign Affairs of Ukraine Dmytro Kuleba explained in more detail about the recognition of Russia as a state sponsor of terrorism as an additional powerful sanction.

He stated this on the air of the national telethon, writes Ukrinform.

«This will mean Russia joining the honorable club of countries that includes North Korea, for example, and this is an important political marker. Secondly, this status implies a very serious complication of the possibility of carrying out financial transactions for the Russian Federation, that is, it is, in fact, an additional sanction, a powerful sanction against the Russian Federation,» he noted.

The Ukrainian side did everything possible to ensure that this decision was adopted.

«The president has repeatedly emphasized this, I have repeatedly asked for this. There is every reason to make this decision, now we will wait for the reaction of the State Department,» the official summarized.