30 July Summary: Shelling of the Olenivka colony, evacuation from the Donetsk region 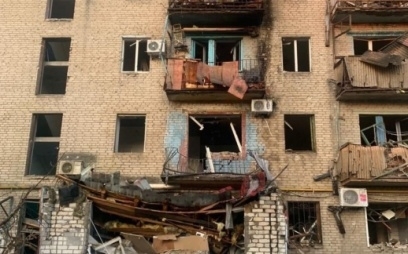 Near Verkhnyokamyanske, our fighters discovered the reconnaissance group in a timely manner, inflicted fire damage on it and forced it to retreat. The enemy also retreated in five directions, from where he tried to break through our defenses. However, the Russians continue to destroy settlements with barrel and jet artillery. So, during the past day, they fired seven rockets on this part of the front, carried out seven artillery attacks, one tank attack, and also used mortars. The enemy continues to use the advantage in aviation, carrying out attacks on at least six settlements of the Luhansk region.

In the morning, the Rashists shelled Slovyansk (the bus station building was damaged), carried out an airstrike on the village of Krasnohorivka of the Ocheretyn community, and are conducting intensive artillery shelling of the towns of Maryinka and Krasnohorivka. In Siversk, a direct hit by a projectile damaged the building of the Center for the provision of social services. Information about the injured is currently being clarified. During the day – shelling from artillery, mortars, NURS airstrike, R-500 «Iskander-K», anti-aircraft missile «Hrad». Avdiivka, Bakhmut, Kramatorsk, Vuhledar, villages were shelled. Vodyane, village Kamyanka, village Kurdyumivka, village Ivanovske, village Yasnobrodivka and others. settlements. 28 private residential buildings and a multi-storey building, premises of Avdiivka Coke Plant were damaged. During the day in the region – 6 dead, 15 wounded.

Over the past 24 hours, there have been 5 shellings of the border, including one shelling of the territory near the village at night Novgorod-Siverskyi district, probably from mortars. Without victims and destruction.

Around 3:00 a.m., the occupiers attacked the school in the Sloboda district of the city of Kharkiv, and a fire broke out. Previously, there were no casualties. The buildings of the central building and the sports hall were destroyed.

In the morning, there was also an attack on the Novobavarskyi district; there were no casualties.

In the region, in the Izyum district, as a result of shelling, a fire broke out at the gas condensate and oil processing unit. A 3-hectare wheat field was on fire in Bohodukhiv district. The Russians also shelled the Kharkiv and Chuhuiv districts. Critical infrastructure facilities, houses, and farm buildings were on fire. During the day, a wounded woman was hospitalized in Tsirkuny, Kharkiv district.

At night, the Russian army shelled the Nikopol district from «Hrad». Up to 80 rockets were fired at Nikopol and the Chervonohryhorivska community. Several dozen private houses and commercial buildings were damaged in Nikopol. One house was destroyed. There is destruction at two enterprises. According to preliminary information, people were not injured. In the Chervonohrihorivska community – without victims and destruction.

At night, one of the sleeping areas of the city of Mykolayiv was shelled, high-rise buildings suffered significant damage. It is known in advance that one person died, three were injured.

There were also several explosions outside the city at night in the Bashtan community. Previously, the air defense system worked. Information is being clarified regarding victims and damage. Yesterday evening – shelling Shyroke as a result of which the fields were set on fire. There are no casualties.

Shelling of the territory and nearby settlements of the Berezneguvate community continues. Villages located on the demarcation line remain under constant fire.

On practically the entire territory of the region, the military of the Russian Federation continues to shell liberated and occupied settlements with tanks, barrel and rocket artillery. Also, shelling of neighboring regions continues from the territory of Kherson region.

The forces of the Armed Forces of Ukraine carried out well-targeted strikes on warehouses and positions of Russian military personnel in Chornobayivka, Nova Kakhovka, Brylivka and villages of Beryslav and Kakhovka districts.

«In a day plus 170 invaders and 10 tanks»: the General Staff updated the data on the losses of the Russian army

In Mykolayiv, the number of victims increased to seven victims as a result of yesterday’s shelling by the Russians

According to the results of the negotiations between the Minister of Defense Oleksiy Reznikov and the head of the Pentagon Lloyd Austin, Ukraine expects good news in terms of strengthening its defense capabilities

«We are in the procurement process»: the Pentagon on the NASAMS air defense system for Ukraine

The USA fulfilled its promise: the country accepted more than 100,000 refugees from Ukraine

Blinken resists recognition of Russia as a sponsor of terrorism – NYT

British intelligence: the Russians installed pontoon bridges and a ferry crossing near Kherson

Russian «diplomats» officially called for the execution of Ukrainian «Azovs»

Undermining from the inside and «Wagner» fighters: everything that is known about the attack on the colony in Olenivka

On July 29, Russian troops shelled colony No. 120 in the occupied Olenivka, Donetsk region. There, the invaders held Ukrainian military and civilians captive. As a result of the attack, about 40 people died, another 130 were injured.

According to intelligence data, this act of terrorism was carried out by mercenaries from the PMK «Wagner» («League») under the personal command of the nominal owner of the company, Yevhen Prigozhin. This was not agreed with the leadership of the Ministry of Defense of the Russian Federation.

The so-called «authority» of the self-proclaimed «DPR» was the first to announce the attack on the colony in Olenivka. Traditionally, the Ukrainian military was blamed for the attack there, and it was reported that artillery shells had hit the barracks with prisoners.

The General Staff of the Armed Forces of Ukraine denied all the accusations of the occupiers and stated that the Ukrainian defenders did not carry out any strikes on the Olenivka district. They explained that thanks to the high-precision weapons received from the West, the Armed Forces of Ukraine deliver exceptionally accurate strikes only on Russian military facilities.

So the attack was carried out by Russian troops. And the goal is to accuse Ukraine of committing «war crimes», as well as to hide the torture of prisoners and executions carried out by the invaders themselves.

The leader of the Azov Movement, Andriy Biletskyi, said that fighters of the «Azov» regiment were being held as prisoners in the Olenivka colony.

«We are collecting information about the victims and specific perpetrators of this war crime. It is already obvious that this was a pre-planned act of a country for which the concept of officer’s honor is unknown, and even more so – compliance with the Geneva Conventions, rules, laws and customs of war,» Biletskyi wrote in the network.

He also announced a hunt for the perpetrators and organizers of this war crime.