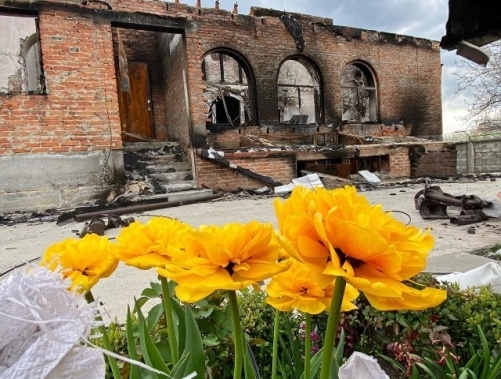 The occupiers gained a foothold in Lysychansk. The enemy also managed to cross the Siverskyi Donets River and capture Bilohorivka district, one subversive and reconnaissance group was neutralized yesterday.

At night, there were two shellings from small arms along the border, Koryukivskyi district. According to preliminary data, no one was injured. Information about the consequences is being clarified.

Yesterday evening, the Russians shelled the territory and premises of the Athens Psychoneurological Boarding School with mortars and artillery. A fire broke out in the institution’s dining room, the administrative building and the dormitory were destroyed. At least three people were injured – they are peaceful people, patients of the boarding school. They are currently in the hospital.

At 4 a.m., the Russians attacked one of the city’s educational institutions, a fire broke out, and part of the building was destroyed. Law enforcement officers are still working on the spot, so far, there are no victims.

During the day, the occupiers carried out artillery strikes on the communities of the Kharkiv, Izyum, and Bohodukhiv districts of the region. Residential buildings, farm buildings were on fire, there were hits in open areas in the fields. In a day, four people were injured in the region, in the Kharkiv district, the village of The three dead were armless.the day, five were injured in the region, among them an 11-year-old child in Chuhuiv district, one in Balaklia. One person died in the Izyum district.

The enemy again shelled the Kryvorizka district, namely the Zelenodol and Shyrokiv communities. People were not injured. In the village of Shestirnya of Shirokivska hromada, windows in a kindergarten were blown out by an explosive wave. Other circumstances and consequences are being clarified.d. The information is being clarified.

Yesterday evening, the Shyrokiv community came under fire. Shelling was outside the population centers. There are no victims.

Also, during the day, the enemy shelled several settlements in the region, in particular, the territory of the Kutsurub community, Pervomaiska, and Voskresen communities. There are damaged buildings, according to preliminary data there are no victims.in Shyrokiv community. One residential building was destroyed, two were damaged. There are no victims.

Shelling of Kherson region and neighboring regions from occupied settlements of the region continues. As a result of the hostilities, there were fires in wheat fields, there were also fires in forests and forest strips, injured livestock, and destroyed houses of civilians.

The situation in Beryslavskyi, Kakhovskyi and part of Khersonskyi districts remains alarming. The situation is tense in Kherson itself.

The occupiers continue to put pressure on educators, doctors. A series of meetings at which they force people to cooperate took place at Ukrposhta, Oblenergo, Khersongaz, and the employees themselves reported this. They are actively looking for railway workers.

UKRAINE: «The military operation is completed»: the flag of Ukraine flew over Zmiiny

«I think that signal is dangerous»: Zelenskyi on whether Lukashenka’s army will attack Ukraine

More than 1,600 unidentified bodies have already been discovered in Ukraine – the Ministry of Internal Affairs

WORLD: The President of the Czech Republic, Milos Zeman, advocated the supply of weapons and the training of servicemen of the Armed Forces of Ukraine.

«Will allow Putin to regroup forces and go on the offensive»: Britain declared the inadmissibility of a bad peace agreement with the Russian Federation

The Minister of Foreign Affairs of Lithuania Gabrielus Landsbergis said that he does not see Russia as a possible aggressor against the West and does not think that the war will go beyond the borders of Ukraine.

The Ukrainian military came very close to the Kherson region, but efforts are still concentrated in the east.

Ukraine is preparing for a counteroffensive to liberate the Kherson region occupied by Russia. It will take place from the west, near Mykolaiv, and the north, from such cities as Zelenodolsk.

This was reported by The Economist with reference to sources in military intelligence.

Kherson is the gateway to Crimea and the only regional center that Russia managed to capture since the start of the full-scale war on February 24. Equally strategically important for Russia is the occupation of nearby Kakhovka, on the left bank of the Dnieper, where a dam supplies the annexed peninsula with water.

The entire region is an agricultural center, providing tomatoes, watermelons, sunflowers and soybeans. For these and other reasons, Ukraine prioritizes efforts to return him.