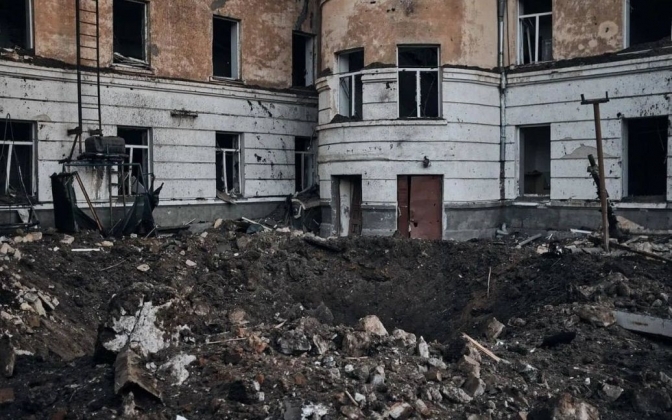 Enemy aircraft operate on the positions of our defenders several times a day. Yesterday it carried out four airstrikes. Three more times, the Russians carried out artillery attacks, used rocket artillery, and twice the assaults were supported by tank attacks. Mortar fire was carried out six more times. The situation in the region remains critical.

Over the past 24 hours, there have been seven shellings of border communities, including one artillery shelling of the outskirts of a village in the Novgorod-Siverskyi district at night. Without victims and destruction. Details regarding the consequences are being clarified.

At night, the enemy launched a massive shelling of the Shevchenkivskyi, Industrialnyi and Saltivskyi districts of Kharkiv. Residential buildings, shops, a market, the premises of an educational institution, playgrounds were hit.

As a result of the shelling, three people were hospitalized with injuries. Also last night, the enemy shelled the town of Chuhuiv. 3 rockets hit the open territory of a private home, one rocket fell nearby.

In general, during the day, the enemy shelled the settlements of Kharkiv, Izyum, Bohodukhiv and Chuhuyiv districts of the region.

Two districts – Nikopol and Kryvyi Rih – came under enemy fire again. The city of Nikopol was shelled twice during the night from Hrad, without casualties. Up to 10 private houses and commercial buildings were damaged.

An Kh-59 rocket landed in Myrivske community of Nikopol district, houses and a gas station were destroyed. Previously, people were not injured.

The enemy shelled the Kryvyi Rih area with «Hurricanes» and barrel artillery. Previously, there were no casualties.

At night, the arrival of several rockets near the regional center was recorded. According to preliminary information, there are no victims. Details are being clarified.

Yesterday evening, a series of explosions occurred in the regional center, this is the result of enemy shelling of settlements located near the demarcation line. The strikes were aimed at the villages of the Novoaleksandrivska community of the Zaporizhzhya district. Private houses and objects of civil infrastructure were destroyed.

Part of the population centers remained without electricity and water supply, currently the networks are being restored. Rescuers of the State Emergency Service extinguished all fires.

One person received shrapnel wounds, was given first aid and treated.

At night and in the morning, the enemy shelled the Korabelnyi district of Mykolaiv. It is known in advance that a private house was hit and several buildings were damaged. Detailed information on damage and victims is being clarified.

According to the preliminary data of the Military Commandant’s Office of the Defense of the city of Mykolayiv, at night the Korabelnyi district was fired upon with cluster munitions from MLRS, and in the morning with Pion long-range artillery.

Mykolayiv district: this morning – shelling of the village. Zaichevske of the Mishkovo-Pohorilove community. As a result, a residential building, a private agricultural enterprise was set on fire, and cars were damaged. According to preliminary information, there were no casualties.

At night – shelling of the village Shevchenkove. There are no casualties.

In the Bashtan district at night – shelling outside the village. Wide. There are no casualties.

Shelling of the territory and nearby settlements of the Berezneguvate community continues. Information on victims and damage is being clarified.

During the day, reports of hostilities and explosions were received from practically all communities of the region. The situation remains critical in Beryslav and Kakhovka districts. Shelling and explosions were also heard in the suburbs of Kherson and villages bordering Mykolayiv and Dnipropetrovsk regions. The occupiers take away all the valuable property from the empty houses.

The occupation authorities are continuing preparations for the referendum, for this they are looking for employees, premises and forming their media representatives for propaganda. Enterprises are being seized and equipment is being stolen.

UKRAINE: The Armed Forces of Ukraine in the south eliminated 39 occupiers in one day, destroyed three of their warehouses with ammunition and four S-300 air defense systems

In the occupied Severodonetsk and Lysychansk, the humanitarian situation is dire – Haidai

More than 50,000 tons of Ukrainian corn destined for export were loaded onto the ships.

Medvedchuk’s term of detention was extended

This is either a crime or a mistake: Zelensky reported that 8 billion euros were «slowed down» for Ukraine

Since the beginning of Russia’s full-scale war against Ukraine, Zelensky has awarded more than 25,000 defenders. Among them, 4,000 Ukrainian soldiers were awarded posthumously.

«This is the beginning of the Third World War»: Zelenskyi – on the terrible consequences of Putin’s victory in the war in Ukraine

«They offer us to forget that we have a flag and a history»: Zelenskyi – on peace negotiations with Russia

«Creating a false reality»: Kuleba appealed to Amnesty International after the accusations against the Ukrainian Army

Ukraine is open to an objective assessment of actions during the war: Malyar reacted to Amnesty International’s statement

«The only thing that threatens Ukrainian civilians is Russian missiles»: Ambassador Melinda Simmons of Britain on the scandalous Amnesty International report