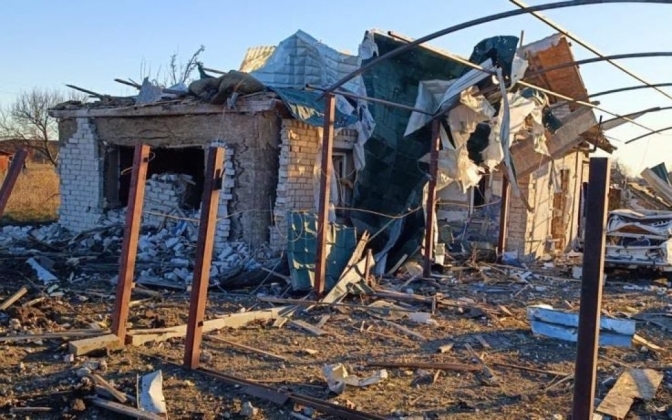 Today is the Day of the Armed Forces of Ukraine!

The enemy fired tanks, mortars, barrel and rocket artillery in the areas of Makiivka, Ploshanka and Nevske settlements of the Luhansk region

The enemy is defending in the Novopavlivske direction. The Russians launched artillery and mortar attacks on the areas of Vuhledar, Bohoyavlenka, Prechistivka and Zolota Niva settlements in the Donetsk region.

In the Kupiansk direction, the enemy is conducting defensive operations on captured lines. The occupiers shelled the settlements of Dvorichna, Kotlyarivka, Tabaivka, Pishchane, Berestov in the Kharkiv region.

The Russians are trying to improve their tactical position in the Zaporizhzhia direction. They fired tanks, mortars and artillery at the districts of more than 10 settlements, Dorozhnyanka, Gulyaipole, Zaliznychne, Stepove and Plavni of the Zaporizhzhia region.

In the Kherson direction, the enemy is also on the defensive, strengthening the grouping of troops. Areas of settlements bordering the contact line, including Osokorivka, Zolota Balka, Dudchany, Bilohrudove of the Kherson region and the city of Kherson, were affected by the artillery shelling.

«Russia’s defeat is already a settled issue»: Budanov said that propaganda is preparing the Russians for defeat

The country’s chief intelligence officer assured that according to his previous forecasts, Ukraine is «moving according to schedule.»

Russian propagandists have changed their rhetoric: they criticize the generals and discuss their reluctance to lose the war, but Russia’s defeat is a foregone conclusion.

Kyrylo Budanov, head of the Main Directorate of Intelligence of the Ministry of Defense of Ukraine, stated this on the air of the telethon on December 6.

«Ukraine has already won. Everyone in the world already feels it, and we also understand it. Yes, it will be difficult for a certain period of time, but globally it will not change anything,» the head of military intelligence assured.

He drew attention to the fact that the rhetoric of all Kremlin propagandists has changed dramatically over the past three months.

«At first, they cautiously began to criticize their leadership, then the higher generals, and now they have reached the point that there is no question of winning in order not to lose, but everyone understands that this is unrealistic,» Budanov said.

He added that the defeat of the Russian Federation is already obvious.

«I say once again, there will still be some difficult times, but the loss of Russia is already a settled issue, and they themselves know it very well,» – stressed the head of the Main Directorate of Intelligence.

In addition, Budanov said that today Russia is divided not simply into liberals and non-liberals, but based on the principle of «which group will come to power next.» At the same time, it is worth hoping for an internal conflict in the Russian Federation with rallies in big cities, the head of intelligence noted. He explained that «Russia is not such a country.»

Cruise missiles fly through the territory of Ukraine

Cruise missiles fly through the territory of Ukraine. We already even know the approximate arrival to Kyiv – 14:15. This is convenient – to know. You can make tea before the arrival. You can call your loved ones or at work as long as there is a connection. You can send a donation. Mozart is playing – Rex Tremendae.

These words were written by Lyuba Yakimchuk, a Ukrainian poet who performed at the Grammys a few weeks after Russia’s full-scale invasion. She wrote this on Monday 5 December during an air-raid alarm when Russia was sending many missiles to Ukraine. Fortunately for most, Ukrainian air-defense worked, but she captures well here the uncertainty of life while Moscow’s missiles fly around. You can follow her on Facebook.