8 August summary: The US Congress insists on granting Russia the status of a state sponsor of terrorism, Russia killed civilians 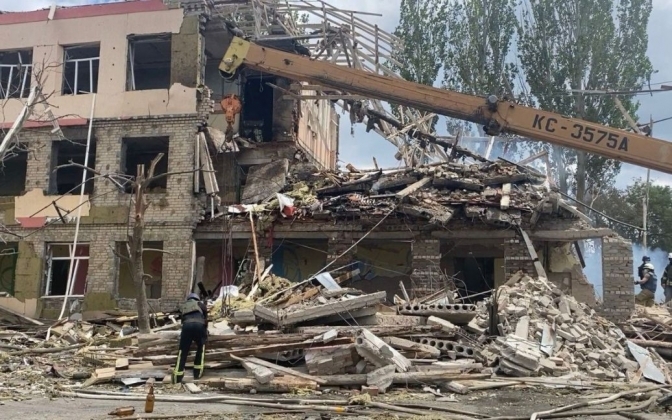 Over the past night, the Russians hit our positions with seven rockets, carried out two airstrikes, shelled 11 times with barrel artillery and rocket salvo fire systems, used mortars three times, and tank troops joined the assault four times. In order to improve the tactical position, the enemy once again tried to organize an offensive in the Verkhnokamyanske area, but again retreated. As in four other directions, each of these attempts to break through the defense of our armed forces was unsuccessful: the Russians were forced to retreat with significant losses.

During the day, Avdiivka, Slovyansk, Bakhmut, Vuhledar, Selidove, Selidove and other settlements were shelled. 23 private residential buildings, five high-rise buildings, six garages, a warehouse and box of the Avdiivka coke chemical plant were damaged. The region remains without gas and partly without water and electricity. Evacuation continues. Five people died and 17 were injured in the region during the day.

Yesterday, the Russians shelled five border communities of the region. In the evening, there was shelling from different types of weapons of the Seredyna-Buda community. A fire was raging. Data on victims and destruction are being clarified. Buryn and Esman communities were also shelled. No casualties.

Yesterday evening, as a result of shelling by the occupiers, a fire broke out in an administrative building in the Kyiv district of Kharkiv. No casualties. The destruction and type of projectiles is set. One of the rockets hit the village of Pechenihy in the Chuhuyiv district at night. A 72-year-old woman died in a private house that was destroyed after the impact.

During the day, Chuhuyiv region was also shelled. The roofs of private houses, outbuildings and outbuildings of civilians burned. During the day, the Russians shelled the Bohodukhiv, Izyum, Kharkiv, Chuhuyiv districts with artillery. According to the regional center of emergency medical assistance, during the day, as a result of shelling, four people were injured and hospitalized, one person died in Cherkaski Tyshky.

The enemy again shelled the Nikopol and Kryvyi Rih districts. Nikopol was attacked three times during the night. The Marganets community was hit by «Hrad». There were no casualties. Two rockets landed in the Chervonogrigorivka community, damaging premises, equipment and transport of an agricultural company. Nine private houses were mutilated. People were not injured.

The enemy shelled the Zelenodolsk community of the Kryvyi Rih district with barrel artillery. Without victims and destruction.

This morning, the enemy shelled the outskirts of the city of Mykolayiv, previously without casualties or damage. Detailed information on the consequences of shelling is being clarified. This morning – shelling outside the villages of Chervona Dolyna, Polyana, and Shyroke. There are no casualties.

Settlements of the Berezneguvate community, located on the demarcation line, remain under constant fire. In the morning, approximately at 04:25, the town of Berezneguvate was shelled. Objects of civil infrastructure were damaged. Detailed information on damage and victims is being clarified.

The situation in the region remains tense. The occupiers are talking about holding a referendum, and Russian and co-operative TV channels and newspapers are actively working. The situation is critical in the Beryslav and Kakhovka districts, more and more people are forced to live in cellars, the occupiers are trying to regain their lost positions and are mercilessly shelling already de-occupied villages. There are more and more reports about mined objects.

UKRAINE: Russia is waiting for the West to tire of supporting Ukraine and will strike with all its might – Podolyak

Russia wants to seize the Donetsk and Luhansk regions completely, in Zaporizhzhia, Mykolayiv, Kherson and Kharkiv – to keep the territories – General Staff

Occupants killed five civilians in the Donetsk region during the day

«A friend is known in trouble»: Podolyak confirmed the transfer of aircraft and tanks from North Macedonia to Ukraine

WORLD: The US Congress insists on granting Russia the status of a state sponsor of terrorism as soon as possible and is putting pressure on Biden

«Any attack on a nuclear plant is suicide» – Guterres

«Time is working against them»: Volker said that Russia has already used 50% of its resources in the war

«This winter will be difficult for everyone»: Volker said that the war in Ukraine will continue in the spring and summer of 2023

Military tensions in the world: the threat to Taiwan due to China’s training and the shaky truce in the Middle East

China continued military exercises that were supposed to end yesterday, and Israel was quiet all night.

China continues military exercises near Taiwan, which were supposed to end the day before, TSN reports.

The unprecedentedly powerful maneuvers that effectively blocked the island began immediately after the visit to Taiwan by the Speaker of the House of Representatives, Nancy Pelosi. Today, anti-submarine and strike drills took place in the maritime airspace near the island, which China considers its territory.

Following the American visit, a delegation from Lithuania headed by the Deputy Minister of Transport and Communications came to Taiwan. Lithuania is the only country in the European Union that publicly approved Nancy Pelosi’s trip.

And during the night, the agreement between Israel and the «Islamic Jihad» group held, there were no new strikes. The situation in the Middle East became extremely acute with the start of the Israeli operation «Dawn», during which two leaders of the terrorist group were killed. Civilians, including a 5-year-old child and a woman, were also killed during the attacks on the militants. More than a hundred rockets shot down by the Iron Dome air defense system were fired from Gaza at Israel.

The Israeli military declares that the operation is over. The UN Security Council will discuss the situation in the Middle East today.