8 December: The situation on the border with Belarus, life in Bakhmut 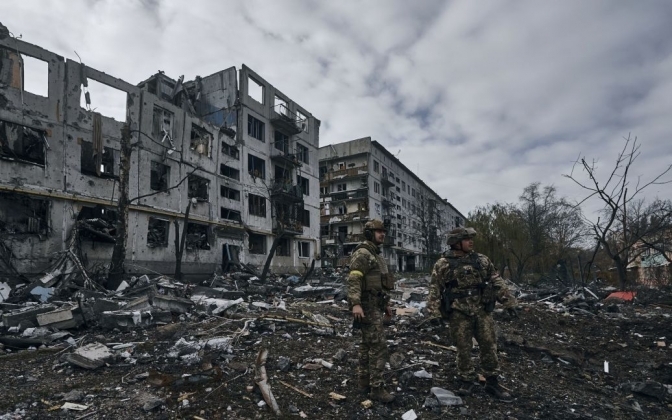 Units of the Defense Forces repelled the attacks of the Russian occupiers near Stelmakhivka, Ploshanka, Chervonopivka, and Bilohorivka.

The enemy is defending in the Kupiansk direction. Shelled Stelmakhivka, Novoselivske and Andriivka.

In the Lyman direction, the areas of Hrekivka, Nevske, Makiivka and Ploshanka were damaged by fire.

From late evening to morning – shelling along the entire contact line, from Vuhledar to Siversk. At night, Avdiivka was bombarded with Hrad anti-aircraft guns with a warhead with incendiary elements. Arrivals in the old part of the city.

Chaotic shelling of positions continued along the defense line around the city. In the morning – intensifying assault operations in the directions of Krasnohorivka, Zenit, Opytny and Vodyane.

Yesterday afternoon – shelling of Kurakhove (city center, market, bus station, residential sector); shelling of Yampol (they hit the city center at a time when people were receiving humanitarian aid there). In one day in the Donetsk region: 9 dead, 15 injured civilians.

This morning – mortar shelling on the territory of Myropillia community. Information about losses among the local population or damage to civil infrastructure is being clarified.

Yesterday afternoon, Russian troops shelled the Znob-Novhorod community with mortars. 11 mines exploded on the outskirts of one of the border villages. No consequences.

This morning, the occupiers hit Kupyansk with rockets. There was a hit in the ground near the foundation of the police station, damaged premises, and official cars. Previously, there were no casualties.

The occupiers are launching rocket and artillery strikes in the Kupiansk, Chuhuiv and Kharkiv districts of the region. There is damage to economic structures and private households.

Yesterday, in the Chuhuiv district, our air defense forces shot down 2 S-300 missiles. There were fires in open areas. There are no casualties.

Nikopol is again suffering from enemy attacks. The Russians pounded the area all night long with «Hrads» and heavy artillery. Nikopol, Chervonohryhorivka and Marganets communities were shelled.

It passed without casualties or injuries. Representatives of the State Emergency Service continue to survey the territory and find out the details of the attacks.

18 reports were received about the destruction of houses (apartments) of citizens and infrastructure objects as a result of shelling by Russian military personnel. Detailed information on the consequences is being clarified. During the past day, the evacuation of the civilian population from the temporarily occupied territory was carried out.

According to the information of the General Staff of the Armed Forces of Ukraine, more than 15 settlements came under artillery fire, in particular, Osokorivka, Zolota Balka, Kachkarivka, Lviv, Dudchany, Tokarivka, Inzhenerne, Antonivka, Dniprovske and the city of Kherson.

Yesterday, four police officers were killed in the Kherson region when they were blown up by a cascade of enemy mines. Four more policemen are injured, doctors are fighting for their lives.

The situation in the occupied Holoprystan community is extremely difficult. The community is under constant mortar shelling.

UKRAINE: The total losses of the Russian Federation exceeded 93,000: during the day, the Armed Forces eliminated 340 occupiers

The Armed Forces repelled enemy attacks in 16 areas, and Russian prisoners ran away from the front

WORLD: Putin is preparing for a protracted war against Ukraine – ISW

«Iran is trying by all means to avoid further immersion in this military conflict»: a military expert on the supply of Iranian missiles to the Russian Federation

Danilov responded to Merkel’s statement about negotiations: «Putin’s capitulation can be accepted standing up»

Half a year in the line of fire: how Bakhmut lives under the constant attacks of the occupiers

Bakhmut of the Donetsk region has become the hottest point of Russia’s war against Ukraine. The Bakhmut direction remains the only one where the occupiers are trying to conduct offensive actions.

The Russian army began massive shelling of Bakhmut back in May. After the occupiers captured Lysychansk and Severodonetsk at the beginning of summer, Bakhmut became for them the main direction of attack when they attempted to advance on Slovyansk and Kramatorsk.

Since then, Kremlin propaganda has repeatedly stated that the Russian military has seemingly entered the city, but the Armed Forces of Ukraine continue to firmly hold the defense. Russian regular army and mercenaries of PMK «Wagner» suffer heavy losses. Footage of the defense of Bakhmut on the Internet is compared with photos from the First World War.

To date, the occupiers are shelling the city day and night.

Before the full-scale war, about 70,000 people lived in Bakhmut, but today there are few civilians left – a month ago, their number was estimated at 10,000. People are hiding from shelling in basements and storage rooms. They are forced to live without electricity, heating, water, gas, and communication. Volunteers bring the most necessary things to Bakhmut. The locals were left without means of livelihood and survive thanks to the humanitarian.

The city was heavily destroyed by shelling, machinery and vehicles were burned on the streets.