A pinch of salt, a drop of vanilla, and a little cinnamon. How Lviv residents make coffee

15:44 04 October 2021
Tweet
266 0
On October 1, the world celebrated Coffee Day, and Lviv could not help but join. Tvoemisto.tv decided to talk to baristas and coffee gourmets to find out all the secrets and nuances of local coffee tradition. 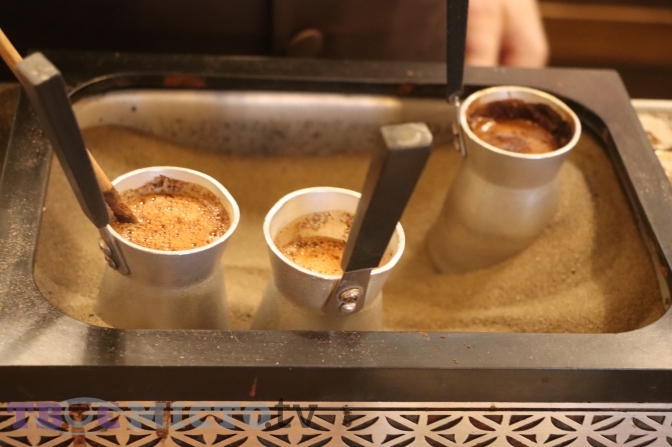 As I visited my friends in Tbilisi, Georgia, one of them brought me for a walk in the city, and we decided to have a cup of coffee.

«Of course, here, it’s not so easy to find a coffee shop with such delicious coffee as in Lviv. The coffee, brewed as deliciously as is usual for the people of Lviv, costs more here», – my female friend told me. And though the coffee we found was also tasty, it was nice to realise that people look up to our city when it comes to this drink.

People in Lviv love coffee. Some say Lviv is a city of «lions, coffee, and rain»: The city is named for and filled with statuary depictions of the noble beast, it rains often, and a native son, Jerzy (or Yuriy) Franciszek Kulczycki, introduced coffee to Europe.

Born in a village outside of Lviv in what was then the Polish-Lithuanian Commonwealth, Yuriy Kulchytskyi and a servant snuck in Turkish disguise across the Ottoman lines during the 1683 Siege of Vienna. They obtained valuable information that encouraged the Viennese not to surrender – and they also brought back coffee beans.

And so Lviv became a coffee city.

«I adore cooking freshly ground arabica in a cezve with a pinch of salt, a drop of vanilla and a little cinnamon. (A cezve is a small, long-handled pot usually made of brass or copper, for the purpose of brewing Turkish coffee.) Sometimes, I also add cream after cooking or a scoop of ice cream, and my husband likes it with a few marshmallows», – says a Lviv resident Anna Pratsovyta.

«For me, the most delicious is El Salvador coffee, freshly ground and prepared in cezve with spices added depending on the mood: nutmeg, cinnamon, coriander, mint», – Ms. Natalia, also of Lviv, adds.

It seems that the people of Lviv approach coffee brewing creatively and seriously. They find time in the morning to make a cup of really good and high-quality coffee.

«Last season (2020-2021), coffee from Guatemala was the tastiest for me. I haven’t decided on the new season yet. Currently, I prefer Rwanda and Indonesia, brewed just in a cup or in a filter coffee maker. Of course, all this is alpine Arabica», – there are real gourmets among Lviv residents who are familiar with this drink, and Ms. Olena Shchehlova is one of them. 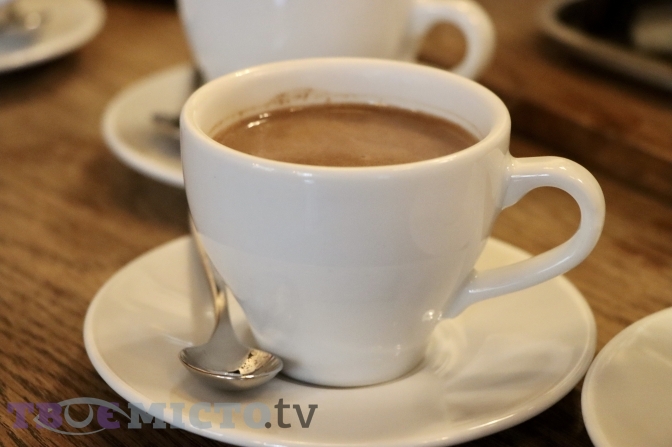 To become more aware of the Lviv residents’ tastes regarding the choice of coffee, we visited the most-known coffee places in the city.

Myroslav, a barista at the Virmenka coffee house, says that coffee in Lviv has been brewed in the Eastern style for more than 40 years: in cezve that the barista moves amid hot sand. In the past, almost 90% of coffee shops brewed coffee this way. Now, they have mostly switched to machine-made drinks, but Lviv residents still order coffee brewed in a cezve frequently.

«Per one ordered espresso, we have 25 cups of oriental coffee», – he says. 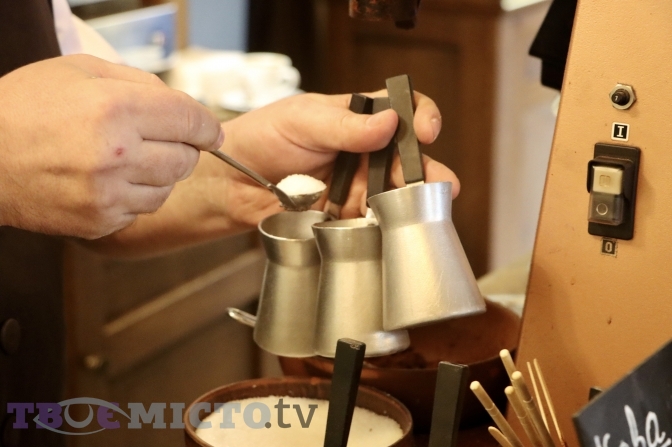 Here, branded coffee in the Eastern way is made as follows: medium-roasted Arabica is brewed for four to five minutes on hot sand, and then cinnamon, cardamom or other spices are added. 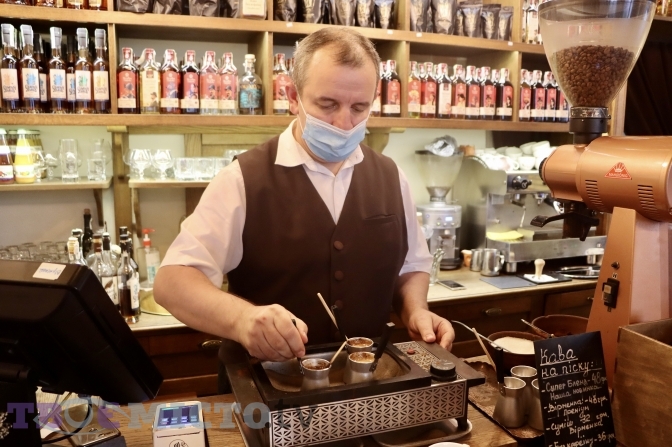 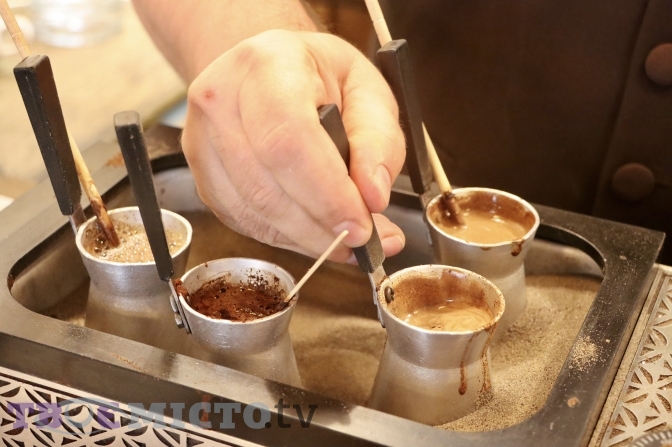 In the cafe «Alternatyvna kava» (Alternative Coffee), according to barista Bohdan, people still order more classical recipes, although the «alternative» is present in Lviv since the 2000s. The most popular drink among the «alternatives» is coffee made in the V60 style. It has such a name due to the dish in which the coffee is prepared, as it has a V-shape at an angle of 60 degrees. 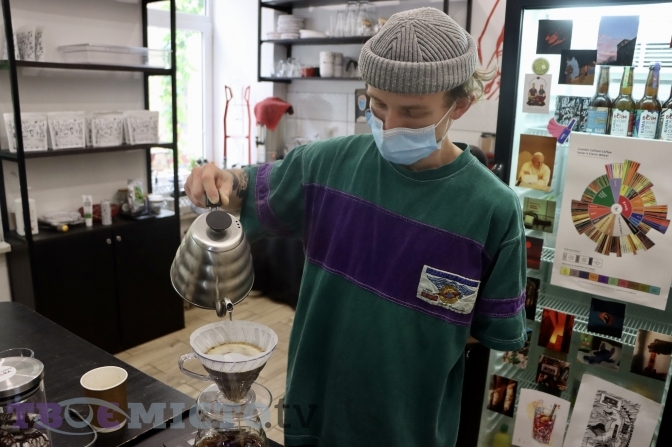 Bogdan brews me beans from Ethiopian Arabica. He says it’s important to have warm utensils in which coffee is made and one in which it is poured. According to him, coffee brewed in V60 dishes should be tasted without sugar, cream, or any other additives. It actually tastes less strong, but has a richer bouquet of flavors. 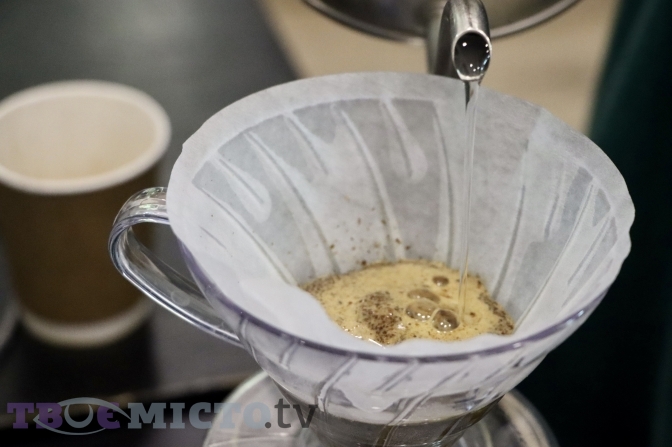 «Despite the fact that it’s less strong in taste, [this drink] has the same caffeine content as classically brewed one, and also a cleaner taste. Such a coffee was first brewed in Japan in 1984, and in our country, this method appeared in 2010», – says the barista. 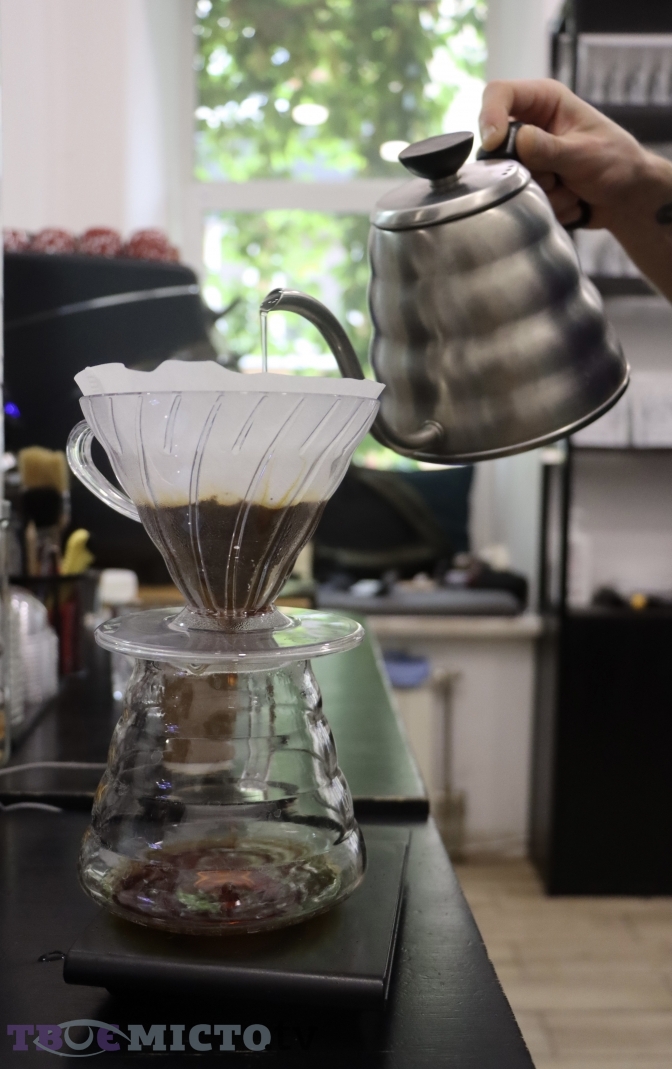 Barista Marta works at the cafe «Svit kavy» (The World of Coffee, with two locations in the center: traditional at Cathedral square and modern on the Rynok square). She narrates that among classics, people mostly order espresso or cappuccino. 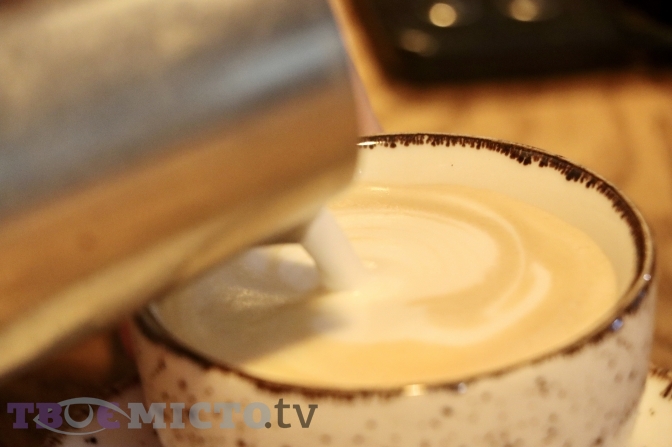 «Connoisseurs and coffee experts often come to us, so in addition to coffee with milk, they often order espresso or cappuccino. Every second person definitely orders coffee, they come to us primarily because of it. Some guests are already aware of the varieties and types of coffee, so they understand what they want», – she says. 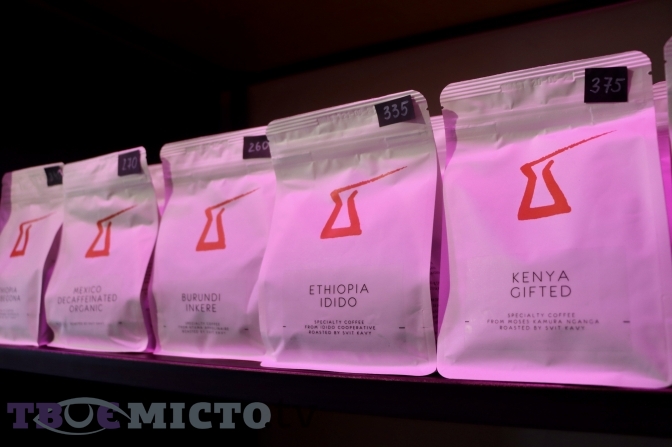 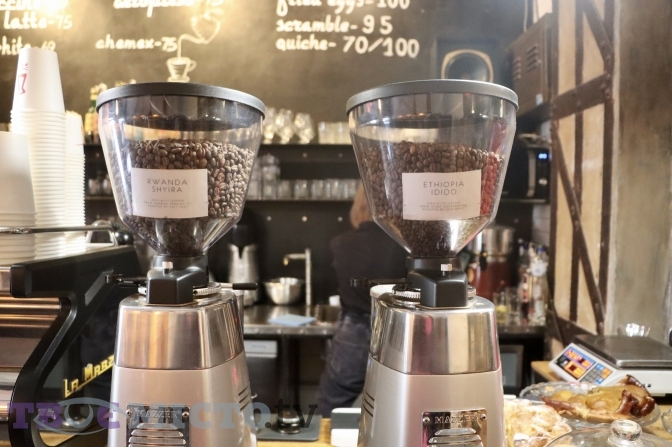 Therefore, no wonder Yuri Kulchytskyi brought coffee to Lviv in the 17th century. This drink has not only established here well, but also has become a hallmark of the city. In addition, the people of Lviv fell in love with this drink so much that they created their own culture of drinking. Gastroblogger Vladyslav Polishchuk shared a recipe for traditional coffee in Lviv:

1. You need to take a cezve, a heavy, massive cezve made of a solid piece of copper, preferably silver-plated inside, and freshly roasted coffee beans – 100% Arabica, sorted just for the cezve, and grind it yourself. The grind should be fine, preferably lightly roasted coffee.

2. In a cezve for two persons you have to pour 16 grams of coffee. You can add 2-3 grams of brown sugar, if you really want it sweet, but it’s better without. If you give sugar – then only immediately. The same rule applies to ground cinnamon and coriander, which often appear in the memories of Lviv residents about the aroma of coffee, which has been brewed here for a long time.

3. The water you pour should be cold, filtered, and unboiled. Stir everything well at the very beginning. If you have a sandbox with hot sand – put it there, and lightly move the sand with a circular motion, rolling it into a cezve, if necessary, to add heat and speed up the process. When cooking on a gas stove – put on the smallest burner and adjust the heat so that it is quite weak, but not the weakest. In order to make coffee extract all its flavors (essential oils) to the drink, it should be prepared for at least three and a half minutes and no more than five.

4. It’s crucial to stir with a stick or a small spoon around the perimeter of the cezve for the first two minutes, expelling air bubbles. This is equally important to stop doing this as soon as foam starts to form and the coffee is rising.

5. Importantly, you mustn’t let the coffee boil: it should reach about 95 degrees, and at the moment when the foam rises, the coffee should be immediately removed from the heat.

6. If the drink boils – you will lose most of its flavors and aromas. If you succeed, you will be able to enjoy notes of different smells and smacks, as is the case with good wine. 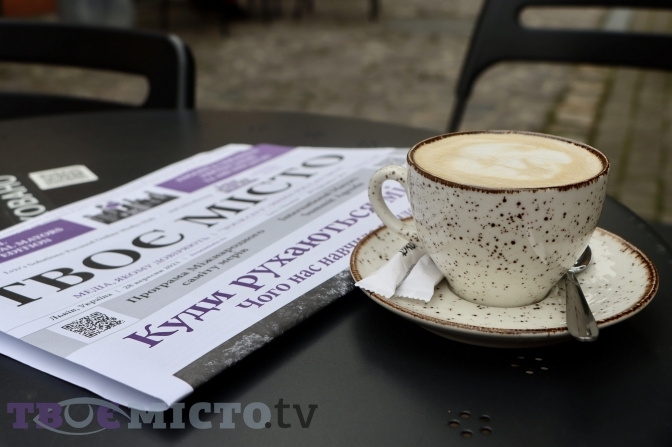 What is the Best Coffeehouse in Lviv?

In Uzhhorod, «Coffee is a Power that Holds Us»

Photo by the author