A tourist information centre to be installed on Dvirtseva square

10:48 24 June 2021
Tweet
285 0
«The project included the concept of creating a place («dvirtsevyi») park, which could be called a meadow park, because there would be mostly meadow plants. Now, sage is blooming, and by the end of autumn there will be verbena» 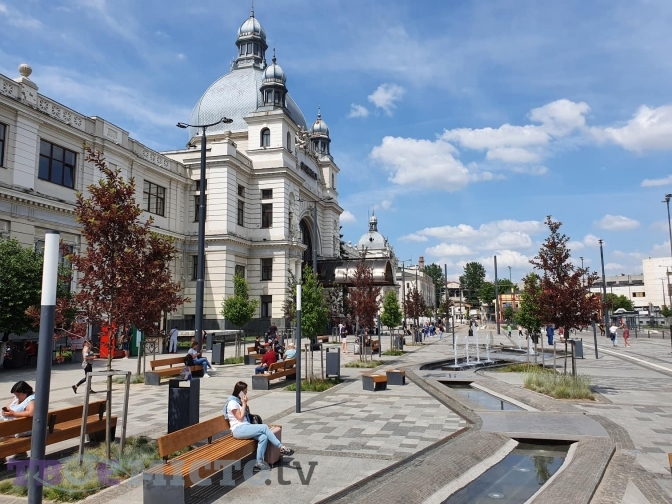 A year has passed since the reconstruction of Dvirtseva square began, in front of the Art Nouveau Lviv Railway Station, or Vokzal. A public space and a fountain were arranged, plants were grown there, and a tourist information center will be built soon. Tvoemisto.tv found out when all the reconstruction works will be completed here.

«As for now, the second tender has been announced, because the first one, which dates back to March, was appealed by the second bidder. So the Antimonopoly Committee overturned the decision to recognize the first bidder as a winner. Therefore, there is no permanent contract yet,» – Oksana Esteferova, the director of Lvivavtodor (a state owned road construction company in Lviv region), explained to Tvoemisto.tv. Dvirtseva square was transferred to the responsibility of the administration of railways in Lviv district, which financed a direct agreement for the maintenance of the fountain costing about UAH 650,000 a year. Once a week, it is drained and cleaned.

«The price is as it is, because there are several stages of maintenance of the fountain. Initially, it must be de-conserved before the season, and then conserved again when the season ends. In addition, when the fountain is functioning, its cleanliness must be monitored for about 6 months» – said the head of the company «Patronage» Yuri Chyzhmar. According to him, their organization did work with concrete, hydraulics and waterproofing on the fountain. They’ve participated in the project since the design stage.

«We wanted the guests to see that there is a water element in Lviv [even though Lviv’s river has been buried for more than 100 years under Freedom Avenue], so the flowing water here symbolizes the lack of water in Lviv, but also adds a special hue to the city. The idea to make the river flow into a large lake was suggested by the city’s former architect Yulian Chaplinsky», – adds Yuriy Chyzhmar.

On the territory of Dvirtseva Square, the square and the tourist information center haven’t been completed yet, as negotiations with the contractor still go on, and no funds have been allocated for the works yet.

Benches are already installed in the park. When arranging them, executors paid attention to high-quality varnish and paint coating, so that they don’t wear out as quickly as the benches already installed on the square.

Oksana Esteferova, the director of Lvivavtodor, explained that the benches had been destroyed during two winters, but the contractor has already begun repairing them.

«The benches were destroyed after two winters, because that coverage was probably not enough for such conditions. At the end of 2020, they began to lose their attractiveness, so the general contractor sent a claim to the manufacturer. Now, the benches in the park are installed according to the same technology as used in the reconstructed benches near the station», – commented Oksana Esteferova. In addition, «smart» traffic lights have been installed on the way to Horodotska Street, though they are not working yet. They were installed to help public transport flow into the general traffic.

«Traffic lights will give priority to public transport. All cars going from the station will stop, and then public transport will be able to join the lane», – says Yevhen Kalytyn, deputy head of Lvivavtodor.

The same system will work for trams. This traffic light is called «smart» because it has sensors that can distinguish public transport from cars. The territory of Dvirtseva square is already planted with a certain number of plants. In particular, there are cereals: mint, sage, verbena, erbekia, and others.

«The project included the concept of creating a place («dvirtsevyi») park, which could be called a meadow park, because there would be mostly meadow plants. Now, sage is blooming, and by the end of autumn there will be verbena», – said Volodymyr Chyshynskyi, an entrepreneur who provides greenery services.

According to him, in the first years the plants will need care. In particular, it will be necessary to water them several times a week, but then they will no longer need constant care. It is also planned to install a drinking fountain on Dvirtseva square this summer, but this will take place as part of the reconstruction of Chernivetska street.

As for Chernivetska street itself, which is being reconstructed according to another project, the lighting is only partially connected there, but works on this object are also in the process. Among the problems encountered since the reconstruction of the area began were frequent accidents, downed road signs, as well as many thefts. In particular, flowers with grass and metal bars were stolen, and now they have to be installed again. The reconstruction of Dvirtseva square began on March 1, 2019. The cost of works performed by «Onur Construction» LLC was UAH 165.5 million. The project was made by «Institute of Spatial Development». A fountain in the form of a stream was erected here, trees were planted, and street furniture was installed. After that, more than UAH 70 million were allocated from the city budget for the improvement of the area in front of Lviv’s main railway station. The funds will be used for engineering works not provided for in the previous project, as well as for the arrangement of a small park. The city has also hoped to attract an investor to build a parking lot, located under this park.

A note on why Ukrainian railway stations are called Vokzal

Railway stations in Ukraine and Russia are often called Vokzal, which comes from Vauxhall Gardens on the banks of the Thames River in London. In the 17th century, luminaries created a «pleasure garden» at Vauxhall--a place of festivity in a beautiful setting. The concept was popular and eventually St. Petersburg had its own Vokzal garden. The first railway in Russia brought people from the city to the pleasure gardens, to the Vokzal. And so railway stations in this region are called Вокзал (Vokzal). Vauxhall is also the name of a British car manufacturer, which began near the location of the gardens.