For Belarus: Slavs and Americans Create a Folk Alliance

10:26 10 September 2021
Tweet
580 0
On Saturday 11 September, a band called Slavalachia will play a show in Lviv to unveil new music made in the Carpathian mountains. They're a cohort of Ukrainians, Americans, and Belarussians creating music, embracing endangered cultures, and resisting authoritarian regimes. 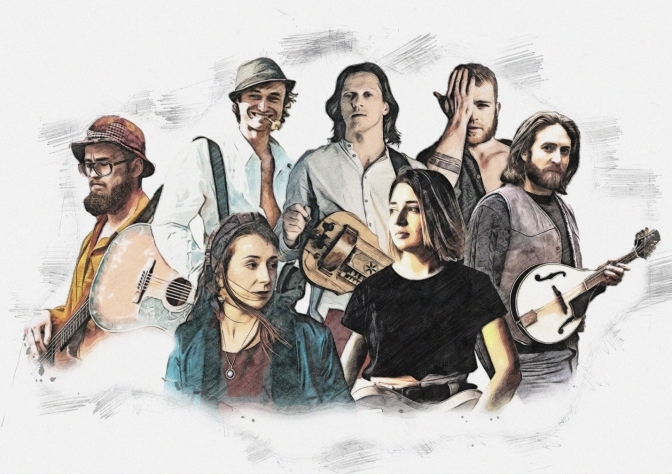 «Amid globalization we need to find new routes of supporting each other.»

A group of American, Ukrainian, and Belarussian musicians assembled to make music in free Ukraine, because in authoritarian Belarus they could be arrested.

Fresh off a performance at Lviv’s popular Zaxid Fest, these eight friends sat amid tables on the echoey cobblestones outside of the café Fatset (Фацет). They all wore white t-shirts emblazoned in red with word «Svaboda»– freedom – and with the image of a friend who was not present: Shymanski Zmicer, currently in a Belarussian prison because he played bagpipes during a 2020 protest against authoritarian President Alexander Lukashenko.

«Ukraine has been an incredible home for us during this time,» says Brett Hill, a singer-songwriter from Athens, Ohio.

Together these musicians have created Slavalachia [SLAV-a-lach-ya], a «folk alliance» of bands from from Ukraine, Belarus, and the Appalachian hills of Ohio, USA. Their mission: to stand against authoritarian regimes in Belarus and around the world, by strengthening and connecting cultures that give people meaning and joy. 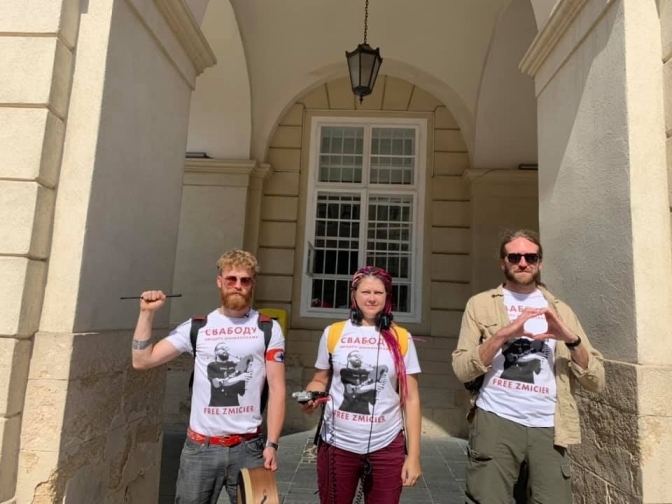 They’d spent the previous weeks near the ruins of the ancient fortress Tustan in Ukraine’s green Carpathian mountains, where they wrote and played music before recording an album in Ternopil: music that will be unveiled in a show in the cellar of the Lviv Puppet Theatre, Saturday 11 September.

This tri-national alliance began at a bar, the West End Ciderhouse, in leafy Athens, Ohio. In March 2019, Nadzeya Ilkevich, a Belarussian studying at Ohio University there, invited her friend and fellow Belarussian musician Siarhei Douhushau, to play some traditional music at the Ciderhouse.

«[Suddenly] all these Slavs turned out of the woodwork and then all these other random Appalachians,» says Brett Hill, whose band Hill Spirits is based in Athens. «In this big room of all these Slavs and Appalachians jamming and at some point we all just shouted, ‘SLAV-a-lach-ya’ and ten months from that moment we were in Minsk, Belarus.» 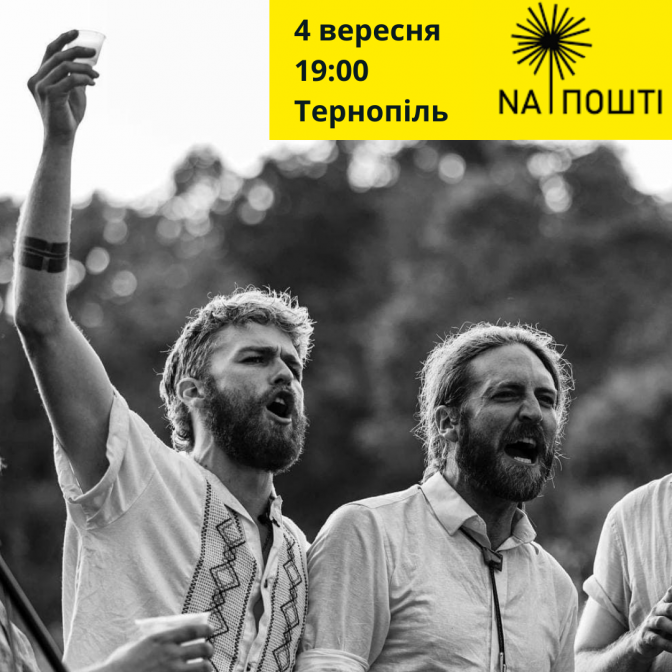 Siarhei and Nadzeya told their American friends about the situation in Belarus – a country with rich culture long oppressed by Soviet rule and still constrained by the decades-long rule of Lukashenko.

Siarhei’s Tradycja organization supports endangered Belarussian folk culture. A proud Belarussian, he refuses to speak Russian, the majority language of his country since Soviet days; instead he speaks the endangered Belarussian language. When the Americans visited Belarus ten months after that Athens concert, in January 2020, he arranged a recreation concert of a winter traditional rite, in a village surrounded by a primeval forest.

The now-imprisoned Shymannski Zmicer, whose image his friends now wear, drove the Ohioans during their Belarusian sojourn.

A week later Brett and his bandmate Benjamin «Benya» Stewart along with filmmaker Quintin Schomaker visited Ukraine for the first time and met Ukrainians including Marichka Chichkova, a Lviv musician who produces concerts at the Puppet Theatre. 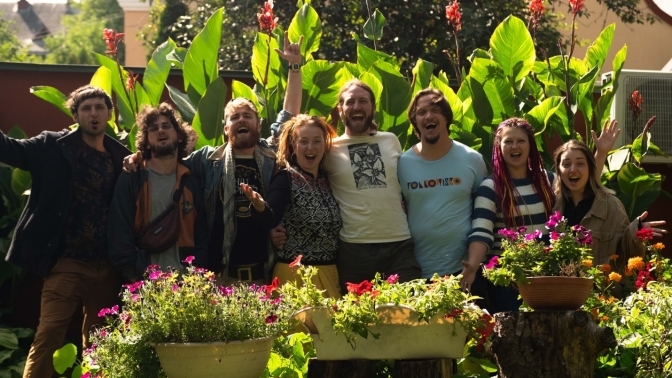 Through their friendship and collaboration the Americans knew – well before the global media started paying attention – that trouble was brewing in Belarus, that people were tired of years of Lukashenko rule. Just days before the 9 August election, the newly formed Slavalachia alliance released a music video, filmed in the three countries, with a tri-lingual version of the old Appalachian protest song, «Which Side Are You On?» written in the 1930s by Florence Reece of Harlan, Kentucky (click here for YouTube video).

Even in their January 2020 visit, the Ohioans had already felt bad vibes in Minsk, especially seeing the still-extant KGB headquarters, something that seemed out of time.

«At first we were inspired by each other’s folk music,» Benya Stewart says. «The show that [Siarhei] played in Athens was epic. He got this whole bar dancing and singing to Belarussian music. After the Belarussian election last summer we came together over the topic of Free Belarus using folk [music] as the vehicle to spread the message.» 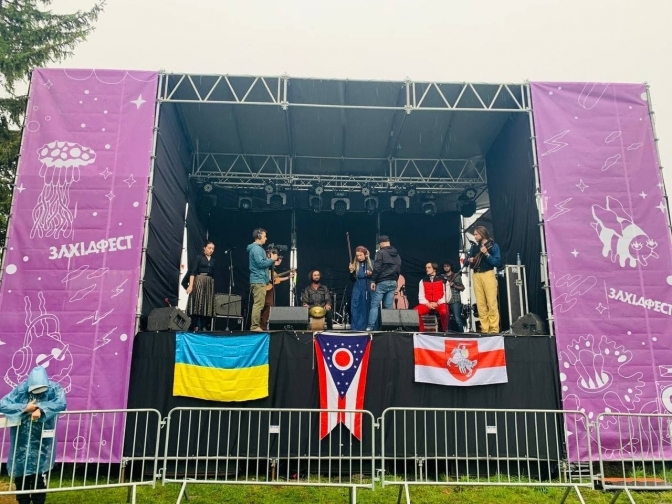 The Ukrainian, Ohioan, and ancient Belarusian flags adorn a stage at a Slavalachia’s performance at Zaxid Fest outside of Lviv.

Their goal now is to strengthen this alliance. The three sets of musicians from three countries still have their own projects (e.g.,the Hill Spirits guys also work with a gin distillery, which also supports a local plant sanctuary), but they collaborate musically where possible: playing to inspire audiences to develop and embrace local cultures while standing up to authoritarians.

«In America there is a real loss of identity,» Brett says. «Identity is a buzz word right now.»

But Hill Spirits, the band, take identity, or culture, seriously. With these «Slavic projects,» Brett says their mission is «to create culture [which is] almost like creating a dairy culture, you have to give it room to grow, give it all the proper nutrients to grow a culture and link into places you might not have found otherwise.»

In Belarus, so much of that culture – even their traditional white and red flag, as well as their melodious language, a close cousin of Ukrainian – is suppressed.

«We’re from Ohio,» says Brett, who also goes by Brother. «I would like to say I love the country I am from but I identify mostly as an Ohioan. That’s something I can identify with. Midwesterners, we are pretty live-and-let-live, go about your business and live long and prosper.

«If folk music can help inspire people to feel that way and take ownership about who they are and how they choose to live, that seems like something worth living for and fighting for. How much better to collaborate with people who are doing likewise in a different part of the world. Amid globalization we need to find new routes of supporting each other.» 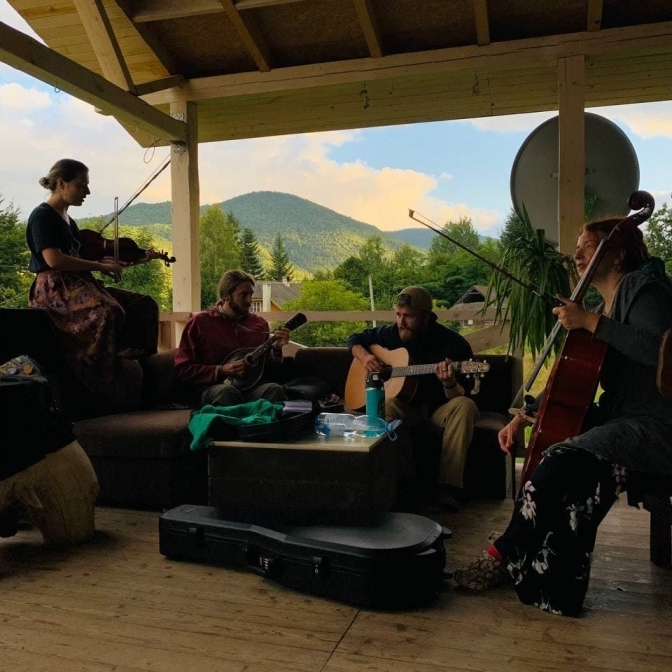 With two filmmakers – Quintin Schomaker from Ohio and Bart Kuraga from Belarus, husband of Nadzeya Ilkevich–the alliance called Slavalachia are filming their journeys and hoping to make a documentary or a tv series.

You can learn more about Slavalachia here. And you can buy tickets for the Lviv shows here. Here is information about Quintin Schomaker’s Create Culture projec» – media for social change.»

Schedule, at the Puppet Theatre

Saturday 11 September, 20:00 – the performance of the entire band Slavalachia