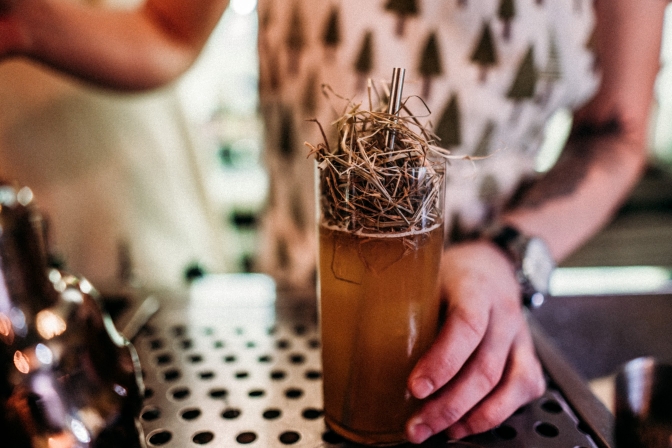 The Sino Experimental owner has brought Ukraine to the final stage of Diageo’s World Class competition, with a drink-making speed challenge Thursday 8 July against fellow top-ten finalists from the UK, Ireland, Portugal, USA, Denmark, the Netherlands, Canada, Australia, and Finland. Here we share with you a May 2021 profile of Andrii Osypchuk, owner of Sino Experimental on Virmenska--and now recognized as one of the world’s best.

See end of the story for details on how to watch Thursday’s live-stream that will determine the World Class Bartender of the Year.

I thought the place with the stained-glass door opened to the street was a new Asian kitchen. A cursive neon sign above the bar said «Sino,» an adjective meaning Chinese: Sino-American relations, Sinovax, etc. I wanted Ukrainian food, but the look of the place, with hanging plants, stone carvings, and lighting that was cool and dim, summoned me to pop in.

The only person there, Andrii Osypchuk, told me that «sino» is Ukrainian for «hay. «He pointed to the grass bundle hanging from the ceiling. «There’s hay above us, and it’s also in our flag: the yellow underneath the blue sky. Hay represents our roots: we make modern food and cocktails based local ingredients and tradition.» Exactly what I was looking for. So I sat down for salo carpaccio zested with lemon and a sui generis cocktail made with some local flowers. It was Fall 2019 and Sino Experimental had only been open a week or so, in what used to be the Armenian Club, with beguiling stone carvings of wild-eyed peasants in various moods, like a Bruegel painting.

Now, a year and a half on, as of April 28, Andrii Osypchuk is Ukraine’s national champion in the World Class Bartender of the Year competition hosted by global spirits company Diago, which owns Guinness, Johnnie Walker, Captain Morgan, etc. Madrid was to host the global finals, but instead Osypchuk will join the other finalists in series of digital challenges to determine the world champion.

Osypchuk’s victory is a unique win for Lviv. Kyiv, Europe’s 7th largest city, has a well established, globally-recognized cocktail culture. Lviv does not have such a reputation, but at least six places in the historic center can make proper classic cocktails. I feel well enough like I’m back in New Orleans, and more is coming, including a Cuban-style daiquiri bar.

Sino, the first such place I visited here, remains my top spot: world-class with a down-home welcome. For the first time since the pandemic began, the kitchen has been re-opened, as of this week, and you can enjoy bespoke and classic drinks, made by Osypchuk’s talented team of Zakhar Pikh, Liliya Tupychka, Pavlo Vitentko, and Tanya Holubec [Vova Balyshev has changed cities since the original publication of this story.]

A native of Mlyniv, Osypchuk was working in high-flying Dubai crafting fancy drinks. Along with fellow Urkainians, Taras Grabovyi and Alina Luchkiv, he came home and opened Sino–choosing Lviv for its history, culture, lifestyle, and tourists. They quickly built a loyal following. Grabovy and Luchkiv have returned to Dubai, but Osypchuk is focused here.

«Ukraine is getting strong on the food and beverage side, getting much more attention from global audiences, because of [Chef Ievgen] Kloptenko and others,» Andrii says, referring to the Kyiv chef whom the New York Times featured last month as the defender of Ukrainian borsch.

«If we play smart we here in Lviv can get to this point when people see we are doing something different,» Andrii says. «We have beautiful nature and lots of cool ingredients around us. In Kyiv you have a huge city and you have to drive far to go foraging. Here you don’t even have to go out of the city, and forests, fields, and mountains are close by.» Locally, he finds cherries in-town; herbs and pine needles in the forests; dandelion, violets, apricots, and more in the fields. Rabbit cabbage, acidic clover-like plants, can replace lemon juice in a whiskey sour.

«Quite often I have in mind what ingredients we will use, but once I found this guy in the woods who had some beautiful cherries from his own garden in the forests. He offered me a bunch, and I made a soda from it.»

The man with the garden was a highly-regarded Ukrainian artist and that homemade cherry soda, mixed with Johnnie Walker Black Label, got Andrii into the World Class Ukraine finals.

Behind the bar, Osypchuk (and his team) can deftly make a bespoke drink, mixing spirits with foraged cordials, based on a simple conversation with a guest. He’s also adept at blending ideas and concepts, as he demonstrated in last month’s World Class national finals in Kyiv.

The event was stripped down due to corona-concerns, but I watched some of the live-stream. When it was his turn, Osypchuk handed the judges water glasses. He explained how he made those glasses himself from beer bottles: recycling that is visible, and he hopes, inspirational, to the guest.

He gave eaсh judge a lollipop with an edible QR code.

«Scan this to read the menu, then you eat the lollipop, so there is no waste and you can enjoy something tasty while you wait for your drink,» as he described it to me. He gave the judges Sino-branded coasters, made from the used lollipop straws.

After this sustainability show, he poured Don Julio tequila, white cacao, a rhubarb cordial, and Talisker whiskey in a glass upon a strange black block. Suddenly the liquid inside began to spin and a small tornado formed. «This is the storm that might await the bartender at home,» he joked to the judges, all leaders in the Kyiv bar scene. «Perhaps there is some jealousy, wondering who has been flirting with you at the bar all night.»

The self-spinning drink, the Jealous Margarita, which you can order at Sino, captivated the judges. The secret lay inside the black box: Some Lviv architects at the G Space studio, friends of Andrii, had helped him construct an electromagnetic device, which made the liquid spin.

The judges were pleased and named him Ukraine’s champion. After a series of virtual challenges, the top ten global finalists will be announced the first week of July.

Andrii Osypchuk has plans to improve the bar business by seeking to reuse and recycle wherever possible. We’ve talked about creating a glass studio in Lviv, where artisans can remake empty bottles and broken tumblers into consumer glassware as well as premium art objects.

He also has used revenue from Sino to plant trees on Koliivshchyny Square and elsewhere. From these trees and others, he gets cocktail ingredients. Recalling how his wife needed more calcium when she was pregnant, he is grinding egg shells to create calcium powder to make drinks more nutritious while reducing waste.

«Using local ingredients in a sustainable way, in the modern world there is no other way,» he says.

You can support Andrii Osypchuk and learn more about the contest by visiting the story about him at Difford’s Guide, the global cocktail website.

On Tuesday 6 July Diageo World Class announced, from among the 50 national champions from around the world, their top ten bartenders. They are, in no particular order (with links to Instagram):

On Thursday 7 July, each of the top ten bartenders will participate, virtually, in the «Singleton and Talisker» speed challenge. Due to coronavirus travel restrictions, they each will direct avatars in London to make four cocktails live: one shaken, one stirred, one built, one bartender’s choice. Then in-studio judges, all elite bartenders, will then determine the global Bartender of the Year. You can watch online here. There will be streaming in the afternoon with the final decision of the global champion after 10pm Ukraine time (see schedule at link).