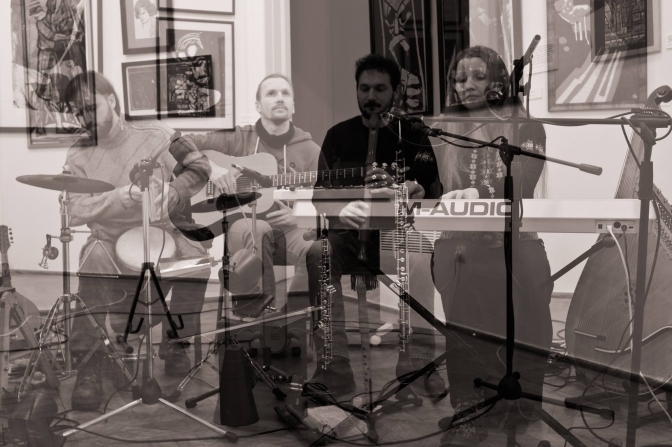 Uniqueness often means staying aside from the mainstream, and this can be experienced through the music of Lviv’s acoustic band «Try kroky v nich» («Three steps into the night»). Live performances filled with improvisations and diverse playing techniques release the listener from the dynamic rhythm of today’s life and make him focus on pauses, musical accents, and unpredictable lengths of slowly fading notes.

Lviv Now talked to the members of «Try kroky v nich» Viktor Martyniuk (percussion) and his wife, Marichka Koshelinska-Martyniuk (bandura/ piano), about the history of the band, process of creating songs and their separate project, based on the poetry of famous Ukrainian writer Lesia Ukrainka. 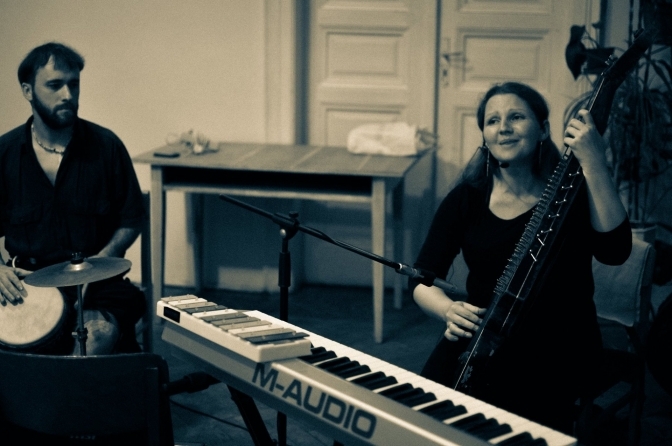 About 15 years old – this is the age of «Try kroky v nich», and Viktor with Marichka are okay with such an approximate wording. They say counting years ceased to be necessary in some moment, because the band transformed itself radically during the years of its existence.

Except for him and Marichka, the band also consists of Olexander Mikhalitsyn (guitar) and Danylo Ilnytskyi (wind instruments), who also teaches literature in Ukrainian Catholic University.

While listening to «Try kroky v nich», jazz and folk elements can be heard. Regarding the question how much these genres really weigh in the band’s music, the couple is mathematically precise:

«I feel like it’s about 30 percent each» – thinks Marichka.

At the same time, the musicians are careful with labeling genres:

«With jazz, it’s probably the most complicated thing, because this word sounds very responsible… Jazz is more about feeling, the way of experiencing. If we perceive jazz as a kind of elitist attitude to music – then I’d rather say no, we try to treat music making more democratically» – explains Viktor.

«As for folk, we obviously started with it, and lullabies are folklore material processed not in the spirit of some specific genre adaptation. When we began, there was a trend on ‘world music’, we actually started at the same time as Dakha Brakha».

The latter band, as Viktor claims, had even a similar set of instruments, but they decided to remain within the field of folk music, while «Try kroky v nich» started writing their own lyrics and melodies or taking the poetry of contemporary authors, putting it to music. In case of sung poetry, the band often took the works of the authors who didn’t expect their poems to be sung.

«The idea is not to transform a poem into a song. Have I said it right?» – Viktor smiles at his wife – «We have to sing it, but [it’s different, because] a song is initially created as a song».

Apart from experiments with musical forms, another unique feature of «Try kroky v nich» is their playing technique. The band often uses unexpected combinations like playing the bandura with a bow, or using non-musical items like loudspeaker or even a typewriter. 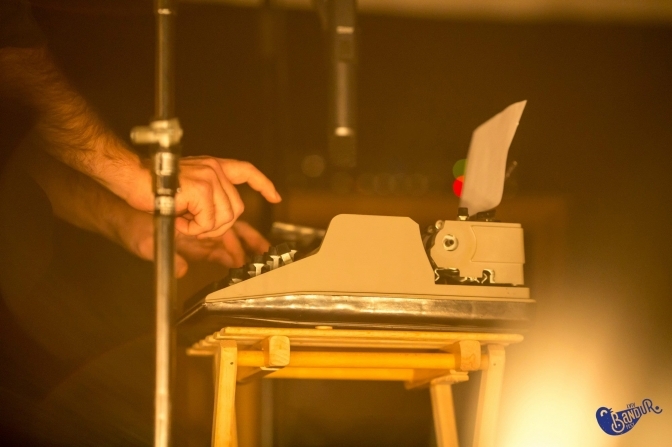 On the question how such ideas emerge, the musicians respond that it happens by chance, and it’s hard to predict what might become the source of the next weird playing technique.

«Sometimes, the fingers accidentally lay on the strings under the bridge of bandura, and it produces a different, almost drumming sound. These things emerge unexpectedly» – says Marichka. «Regarding the bow, it’s probably about my love for the cello. I wanted to extract this sound from bandura when I needed this».

The musicians maintain their activity as a hobby, though their approach is fairly professional. Before the pandemic, «Try kroky v nich» gave numerous concerts on their own or taking part in musical festivals in Lviv and beyond, making live performance the main way of communicating their music to the public. The band’s first album «Kovdron’ka» («A small coverlet»), written in the form of lullabies, was also recorded in the studio. Despite its name and form, the band tried to break a common perception of lullabies as the songs which are performed solely to lull kids.

«I think only a few of these songs are aimed to serve this purpose. Mostly, they are about some ‘inner kid’ living inside each of us. It’s a possibility to listen to lullabies beyond their functional role» – notes Viktor.

More songs from «Kovdron’ka» can be listened to on YouTube, Soundcloud and Bandcamp.

Viktor and Marichka’s latest project «The road to Burkut’’ is based on Lesia Ukrainka’s poems, wrapped with the unique sound of «Try kroky v nich». Its idea emerged during the spring 2020 quarantine, when it became hardly possible to hold rehearsals and concerts. As the musicians admit, it was a challenge in several senses, because the couple started their project alone, without the other two members of the band. The main difficulty was the «lack of hands» to play all musical patterns, which was quite different from the creative process of the band, when everyone writes his line separately. One more feature added by quarantine to the process of music writing was the use of computer programs for sound processing, which was in some sense a departure from the band’s traditions.

Despite the possibilities of listening to «Try kroky v nich» on the internet, it’s incomparable with coming to their live concert and diving into their music to find the hidden power of acoustic sound.

The band announces their performances on their facebook page.

In addition, Viktor and Marichka shares to the audience of Lviv Now the top-5 songs of different performers and languages, which inspire them the most: