«I am here for my family and my country.» The story of a fighter who read Timothy Snyder’s book in a trench

14:24 10 January 2023
Tweet
1395 0
«We have to learn to live in this new reality without getting used to the war itself. Together to victory!» – Oleksandr Shyrshyn, military serviceman and a graduate of Lviv’s Ukrainian Catholic University (UCU). 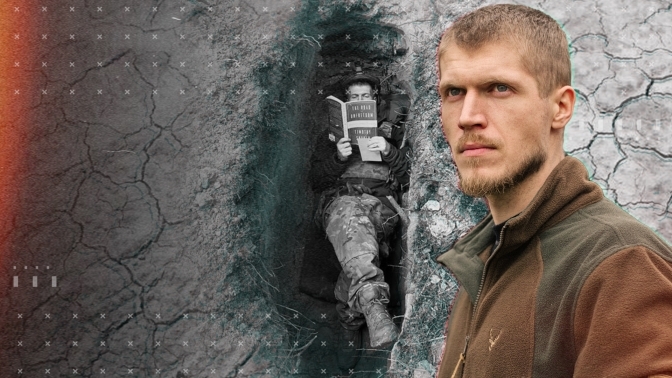 Oleksandr (Sashko) Shyrshyn is a graduate of the master’s program «Management of non-profit organizations» at UCU’s Institute of Leadership and Management. A few days before February 24, he signed a contract to join the reserve in the 80th Separate Amphibious Assault Brigade of the Armed Forces of Ukraine. He felt that a war would come, so staying away was not an option.

In June 2022, Sashko was wounded at the front and miraculously survived. Shortly in the summer, he was awarded the Order «For Courage» of III degree. On January 2, historian Timothy Snyder made a tweet with a photo of a soldier reading his book «The Road to Unfreedom» in a trench. The caption in Ukrainian: «The highest honour for the author is his reader» went viral. As it turned out later, it was Oleksandr Shyrshyn in the photo.

«I was very surprised that Timothy Snyder reposted my photo and that it started to gain traction. It’s just a photo, nothing special. A week will pass, and everyone will forget. But the book is really interesting,» – Oleksandr commented. In an interview with Lviv Now, Sashko talked about his service, what motivates him and why it’s important to continue supporting our army now. 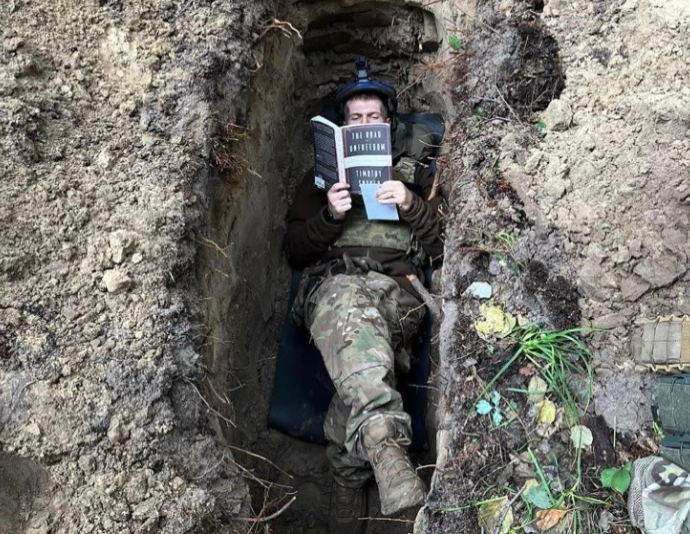 Why did you decide to go to the front? When and how did it happen?

I had no doubt that there would be a war. Of course, I did not know the dates, but I was preparing for it. A month or a half before Russia’s full-scale invasion of Ukraine, I went to the unit to sign a contract. I joined the reserve so that, in case hostilities begin, I know who I should go to and with whom I should start working.

On the eve of a full-scale invasion, I was called to the unit by phone. I planned to leave shortly on February 23, but the mobilization of reserves was announced on the same day. By the time the documents were processed, it was late in the evening, and on February 24, I was already in the military unit. From there, I went to the front.

In the beginning, we were in the Snihurivka direction [southern Ukraine], then we moved to the Zelenodolsk district, and then – in the Kherson direction. Later, we went to the East.

What are your duties at the front?

How do you and your comrades feel now?

I feel both physical and emotional fatigue. Many of my friends died, many were wounded... This is also evident. You experience it on all levels: both emotionally and psychologically. 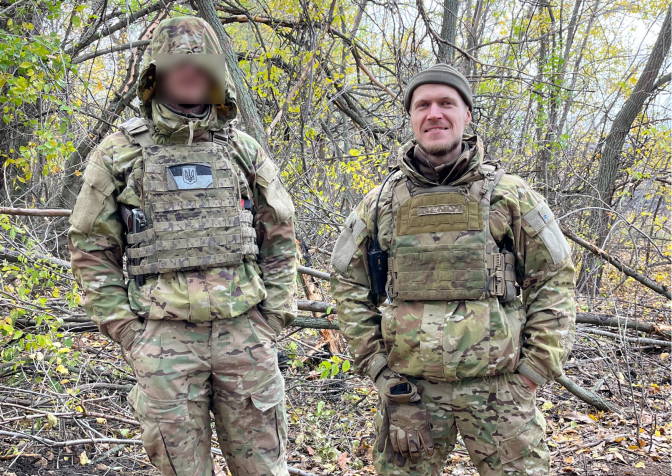 What are the biggest challenges you face in this war?

War is a very uncommon thing: at different times, you face diverse difficulties. At one point, your close brother dies. In another, you face incomprehensible actions of the command. There are also a wife and children at home, whom you do not see for a long time, and this creates internal tension. There are moments when you are conditionally physically exhausted and do not know what to do and how. The head simply does not work in such a way as to make the right decision or to make any decisions at all.

In June, I was wounded. The situation was such that I miraculously survived, by the grace of God and no other way. I was leading out the column. We were among those who held the line in Hirske [Luhansk region], when all our soldiers were withdrawn from Zolote [below, at the request of Sashko, we provide a description of his wounding from the story he published on Facebook.]

Having reached the checkpoint, we clarify the route and our following actions. We form a column, move forward, initially – to pull out one of the «boxes» that refused to go. Two military vehicles drive up to meet me, ask whether I know the way and join the column.

We move in the indicated direction. Everything around is on fire, which, on the one hand, causes suspicion, and on the other – is the usual military routine. As soon as we left the trees, I shouted:

At that moment, the first shell hit our car. The vehicle was thrown, the front parts flew in the air. Everything turned white in my eyes and my first thought was: «Well, that’s it... Died...». The comrades who followed us in the column, seeing the sight, decided that we had come across a mine and were turned into «meat».

I was lying with my head on the door, the veil came off my eyes, and my second thought was: «Bursa – 200...». Then, there was a second attack: the projectile passed through our car through the windshield, penetrated the armoured personnel carrier and exploded there. The «box» ran into my car from behind.

To no avail, I began to open the locked door and, turning around, I saw «Bursa» trying to get out in the same way. For a moment, I was glad that he was alive and immediately climbed through the window, taking my helmet and «radeika» [radio receiver].

When we got out of the car, machine guns were firing at us from all sides, and it seemed that for sure, now we would be killed. Running up to the fire support platoon, panting, I yelled that there was a tank, asked them to either work with the Javelin or leave. The distance to the tank was about 50 m, so it was impossible to «work».

We ran back to the next column, which was waiting for the command and ready to advance. We took one wounded man and quickly built another route between the two fires. I got into the car and panicked. I begged to get out and escape on foot, but every time I was forcefully pushed back.

We managed to get out, and after a few hours, the ring was closed. Along with the car, there died my dog, which I planned to take to my parents so that it would not suffer in that hell. This day took three more fighters.

All the time after the event, I scroll through the possible developments in my head: what if we had done differently, what if we still managed to use anti-tank means, what if... if... if...

When we returned to the «rear», we sat down on a bench, the guys gathered around and were silent for a while. Then it sounded: «Yes... in Hollywood, they don’t shoot like that...»

God, don’t let me go through such an experience again.

What helps you in this difficult situation at the front? What is your motivation?

My motivation, above all, is my family: my wife and children who stayed at home. This is one of the main reasons why I went to war. Also, I am not indifferent to my country. I hope (although, perhaps, with some doubts) that we will have some positive changes. This is the second of my main motivations.

Even in the rear, everyone can contribute to the victory by qualitatively performing their duties at the place where they are. Recall your studies at Ukrainian Catholic University, do you feel the support of the community during the war?

I feel the support of the Ukrainian Catholic University’s community from the very beginning. Starting with wishes, and finishing with the fact that people ask how I am doing and provide help. In particular, when I was wounded, the greatest resonance was raised precisely in the UCU community.

I would like to tell my classmates and colleagues to hang on because everything will be fine. The war will end and we will still have a lot of work to do. Therefore, it is necessary to prepare for this.

Support our boys and girls defending Ukraine. This war is for a long time and, unfortunately, there will be many more sorrows and tears. But together, we will go through everything, we will rebuild everything. We have to learn to live in this new reality without getting used to the war itself. Together to victory! Everything will be Ukraine! 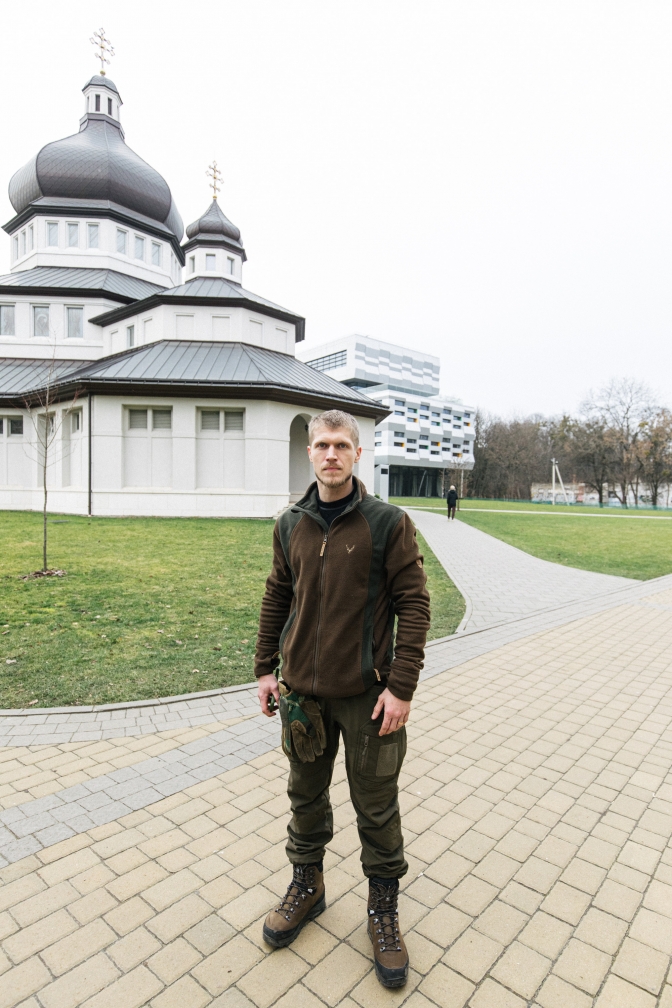 What are your plans for after the victory?

The first thing is to rest and go somewhere abroad with my family. We will see later. I will look for what I can do next. Maybe, I will still dare to open my own business.

When the war ends, many years from now, I will go with my children to all the cities which we defended or liberated. I will go with the only goal – to see the happiness and absence of fear people’s eyes, the children who will play on the streets, without begging and creating «block posts» that have accompanied them for a long time. It may be for the sake of «healing» your own soul, but it will be the best therapy.

I hope at that moment, there will be nothing around that would remind me of the war: instead of a burned out machinery, tractors and combines will work on the sown fields, pits from mines and shells will be covered with another layer of asphalt, not a single broken house, restored forests…

Photo by Lesyk Urban and from the archive of Oleksandr Shyrshyn