«If you want to slack off, recall boys and girls in the trenches.» The professor who took up arms

16:50 19 January 2023
Tweet
1172 0
«The guys at the front took on the duty to protect you, and your task is to study and rebuild our state. Your front is here! Either you are on this front, or you go to work, or to military service», – university teacher and military serviceman Andrii Romaniuk addressed the Ukrainian youth. 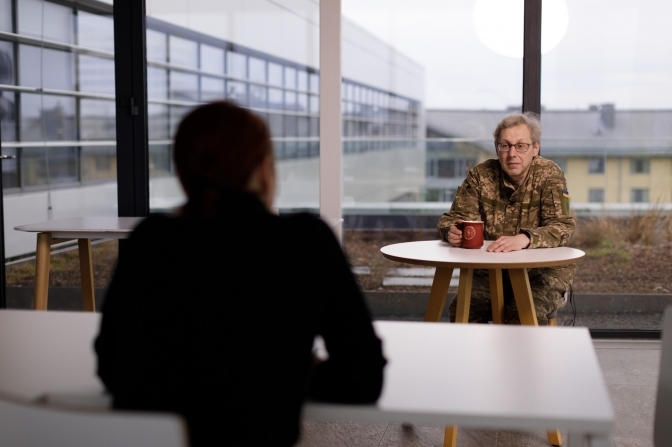 Andrii Romaniuk is an associate professor at the Ukrainian Catholic University, who teaches in the Department of Computer Sciences and Information Technologies. He has been working at the university since 2015, but from the beginning of the full-scale war, decided to go to the front and defend Ukraine. Recently, professor Andrii was allowed leave and came from the war zone to Lviv for a few days. We asked him what it was like to spend ten months in the army, what was inspiring, and what the difficulties were.

What were your feelings on February 24?

I went to bed on February 23, and then it was already known about some kind of Putin’s decree in Russia. So I went to bed thinking that there would be a war in the morning. Unfortunately, that’s what happened – the war woke up too. The classes still took place in the classrooms, I also spent a few at Ukrainian Catholic University and the next day, February 25, I went to the military recruitment centre. There were many people there. I also tried to sign up for that stream of potential volunteers. At some point, we were told that the troops we were applying for had already been recruited, and there were no places. However, there was recruitment for the Territorial Defense Forces. I have a military speciality – «anti-tank gunner». I called the recruitment number, stated my speciality, and they immediately told me to come. In 20 minutes I was ready and at the meeting place. So, I’ve already been in the Ukrainian army for ten months.

The first days seemed simple. And now I have the feeling that I am going from Hašek to Remarque. I am one hundred per cent sure that Hašek had served, because I saw the whole type of «The Good Soldier Schweik» in our army [laughs]. It’s a pity, but now there are more «Remarque» feelings. It may seem to us that we have been living for many years and have enormous experience. But such a number of types of people, different characters, relationships that I happened to see in the war… I did not meet it anywhere, I couldn’t imagine. I met a huge number of good people, but at the same time, there are problems in my service – they are also related to people: we are all good, and wonderful, but when we are together – for some reason, we do not give the desired result.

How would you describe your life in the army?

I wouldn’t say that there are any physical overloads, though if the heart rate monitor suggests you are already «out of breath» and you still have 500 meters to go, then it is difficult. But psychological overloads bother me more and, unfortunately, they are accumulating. Many in the army successfully cope with them, but not all. Often, in order to get rid of psychological difficulties, people resort to alcohol, and this is not an option. Unfortunately, there is no psychological support. There is a nominal service, but in fact – nothing. All this irresponsibility, indifference to the cause, and unhurriedness remind me of Soviet relics. Although many of those who are currently in the Ukrainian army have never seen the Soviet Union, I have a feeling that the «Sovok» [«scoop» in Ukrainian, which is a paraphrased abbreviature of the Soviet Union] is still very much alive here.

Read also: «I am here for my family and my country.» The story of a fighter who read Timothy Snyder’s book in a trench

I was surprised that even when we were settled in Lviv, little attention was paid to the living conditions of the soldiers. For some reason, it’s not considered so important. Now it is felt even more acutely. In a combat zone, a soldier, leaving his position, must have a place where he can rest, wash, and regain consciousness. If he doesn’t, it’s not a professional approach.

Could you please name something positive that happened to you recently?

On St. Nicholas Day [a Ukrainian religious holiday, celebrated on December 19], my comrade Mykola gave me his car, because I heavily damaged the previous car, and it broke down, unfortunately. If it weren’t for this gift, I wouldn’t have had time to get on the train and come here to Lviv to see my relatives. Although this is only a short leave, I still have the opportunity to see my close people. Everyone is waiting for the arrival of St. Nicholas, and it happened so that I had a very touching present this year.

Was your arrival in Lviv a surprise for your family?

I wanted to make a surprise, but it didn’t work because I didn’t have the keys to the apartment [laughs]. So I had to inform them in advance.

What would you say to students who are actively helping in the rear, or are, like you, at the front?

Students should understand that after this war, our state must reach a new level. And these are the students who, despite the war, must find strength in themselves and do everything to grow to the level that will help our country rise to a higher level. You students should invest your current time in becoming excellent professionals and whenever you feel like «slacking off», recall those boys and girls who are sitting on the front lines right now.

Read also: «I wanted to be called Lion because I am from Lviv.» This is how Ukrainian soldiers choose their call signs

Volunteer options are good, but you should demand more from yourself and the teacher, sit up at night, and study to get a high qualification to make Ukraine stronger. The main task of a student is to leave the educational institution as a qualified specialist. The guys at the front took it upon themselves to protect you, and your task is to learn and rebuild our state. Your front is here! Either you are on this front, or you are going to work, or to military service.

I often walk down the street, meet a military man and want to express my gratitude and respect to him. But I don’t know how to do it correctly. How to show our gratitude to the military? What do you feel among civilians?

It seems to me that there is no need for any superpowers, there is no need to rush to the soldier’s chest [smiles]. A military man works, does his job, and a man helps the military with his dignified life in the rear. I got to Kharkiv from the place of our deployment, I was walking around the supermarket. I was a little tired, dirty and no one batted an eye at me. I went and told my comrade, but I wonder how we would feel when we return from the front, whether we would be able to walk among people. And here I am in Lviv, going to the supermarket, and it’s the same normal. But I haven’t been to Bakhmut, I haven’t been to Mariupol... And this is a different level of sensations, a different experience. You don’t need to do something extraordinary for the military, just be responsible towards life and our country.

Do you feel supported by volunteers?

I am infinitely grateful to the volunteers, the Ukrainian Catholic University, my students, my former students of Lviv Polytechnic, and graduates. We appreciate and feel this help. It is very touching when you realize that people remember you and something about you, and they help you.

What is your point of reference?

My wife, family. I must return from the war and give thanks, compensate for everything [smiles]. It was my decision to go to the front. And it’s one thing when I’m somewhere in the east now. And the wife must be allowed to do everything, solve all the affairs, pull everything on herself. My absence relates not only to me, but to many. Those wives who are here in the rear, it is no less difficult for them than for those guys who are at the front.

Many people here in the rear take victory as a foregone conclusion. What do you think?

To be honest, when I read the headlines and see the number of discussions and talks about reconstruction, which looks like victory is an accomplished fact, I get a little angry. It seems to me that half of these efforts should be directed to victory. The fact that people already ride a white horse into an unknown destination is a deceptive euphoria. We do not have the enemy to relax. Undoubtedly, reconstruction is a difficult process, but a lot of effort still needs to be directed to victory. We will all rebuild, but first, we need to get rid of not only the enemy, but also those legislative and administrative layers from Soviet times that we did not give up during the years of independence. If we continue to try to build something on this basis, if we put another layer of plaster on top of the current layers, then this wall will collapse and hit us hard.

Andrii Romanyuk is a PhD Candidate of technical sciences, associate professor of the Department of Computer Sciences and Information Technologies of the Ukrainian Catholic University, who teaches the basics of programming.

Teacher with 15 years of experience, author of more than 30 scientific educational and methodological works.

English version of the text by Vitalii Holich