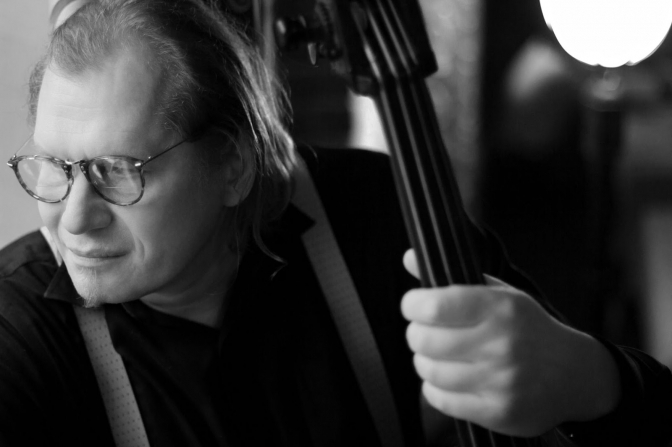 Retrospective: After the short January lockdown in 2021, Lviv became a hot spot for jazz, one of the few places in the world where people could play live music. Because of this, musicians from Europe and the USA visited, and something special began to form. Musician and producer Andrew Arnautov chronicles this time, early 2021, in this column, which will be the first of a weekly series of jazz reflections.

Lviv, february 2021 – As the last month of winter was coming to an end, a peculiar sensation of a jazz festival was filling the air of Lviv, much like a spring fever.

It all began with the arrival of a few of my jazz musician friends, who coincidentally decided to come for a home visit all at the same time. Those friends were pianist Yuriy Seredin, back from Kyiv; drummer Nicko Shevelov returning briefly from New York; and trumpeter Yakiv Tsvetinskyi, back home from Switzerland.

Naturally, trying to arrange a productive visit, they took the town by the storm of late-night – every night  jam sessions, (in addition to the one that I host regularly at LV Café on Wednesdays), concerts, late-night hangs at a local restaurant, leaving you with that bitter-sweet aftertaste of a real jazz festival.

Since covering all those events would probably take up a whole book, I’ll concentrate on the ones where «yours truly» happened to be an active participant.

So, let me be your «inside man» and give you a brief report on what took place at LV Café Jazz Club, a local spot that is already becoming a new «Grand Central» for jazz in Lviv. So, without further ado, «Taras Kushiruk Quartet»!

The concert happened Feb 25, with Taras Kushniruk on guitar, Yakiv Tsvetinskyi playing trumpet, Leonid Petkun on the drums, and I played my six-string electric bass.

On one hand, the music we played had an almost funky, modern post-jazz edge; on the other, the elegiac, Kenny Wheeler-esque sound of Yakiv’s trumpet gave it distinct nostalgic  overtones native to early ECM style (Editor’s note:The ECM – Edition of Contemporary Music–record label, based in Munich originated in the 1970s as a fusion with elements of classical, traditional folk, etc.)

Taras, Yakiv, and I contributed some original material to this project and the rest of the setlist was filled with tunes written by other authors that stylistically matched the concept.

I did sense that creative vibe was certainly there, so was the adrenaline rush! The music was a bit more complex and involved than your basic «B-flat» standards, (no pun intended), thus ideally requiring a couple more rehearsals, but we barely had two! So, the «butterflies» were definitely present! Yet, everybody on stage was musically accommodating, sympathetic, and very attuned to one another.

And that’s what in my opinion made this concert indeed a memorable event!

The next day, on February 26, Kyiv bluesman Max Tavrichesky rocked the house with his bombastic groove and charisma!

After catching up on things, we decided to go ahead and shoot a few tunes together. So, I pulled out my six-stringer and tried to provide him with a comfortable, transparent groove, to stay out of the way to make room for his vocals and solos.

Max was «taking no prisoners» that night»! And during the last song we played together, I noticed that his guitar was already three strings shy! But what a fun evening that was!

And then the day after, on Feb 27, I could not turn down an invitation to go to the concert of the band named BUDU, of which some of my old buddies from Kyiv are part.

The concert hall at the club was overcrowded, so I situated myself in a favorite spot in the room across the hallway where the music was heard best.

The professionalism of this project’s production was quite impressive! The arrangements, although involved and dense at times, provided a comfortable «hand in glove» feel for the lead vocalist Maria Usenko.

Despite the pre-departure rush (their train was leaving in less than two hours), we still managed to have a brief jam session, where we only had time for two songs.

The first song was a burning uptempo swing, Oleg Pashkovski was at the piano, Andrei Uskevich on drums, I got out my upright bass, Denis Adu played the trumpet and Lviv’s own Yaroslav Kazmirchuk picked up a flugelhorn. At the end of the song, Denis and Yaroslav completely stole the show by engaging in a sizzling-hot, three-chorus-long trumpet battle by trading 8s, 4s, and then down to 2s. For a moment, I thought the house was going to catch on fire from all that massive heat energy radiating from those two!

Andrew Arnautov is a musician, composer, music producer, and jazz educator in Lviv. He hosts the Wednesday night jam sessions at the LV Café, starting at around 9pm weekly. You can find out more at his website.