January 7: In Ukrainian Time-Warp, It’s «Christmas All Over Again»

13:29 06 January 2022
Tweet
400 0
Ukraine’s rituals and rhythms slowly change the mind and habits of an American. Amid hard work, there’s always time for community. 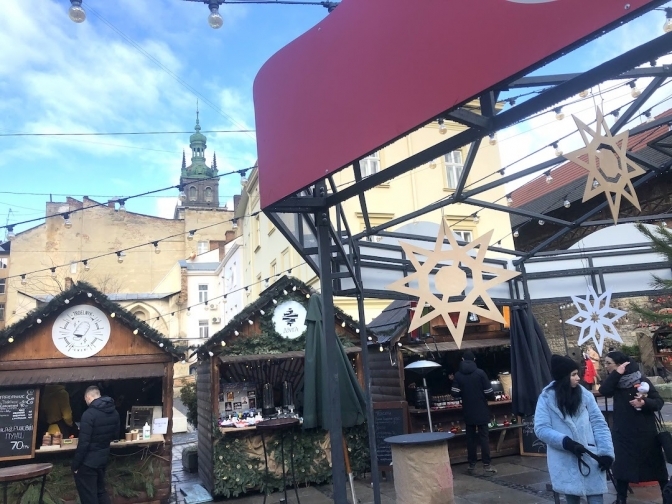 Note: Names might or might not be made-up, to ensure that people always speak honestly in this and future stories.

All the bells are ringin’ out

And it’s Christmas all over again, yeah, again»

– Tom Petty, «Christmas All Over Again»

Lviv, Ukraine, 4 January – I was rushing out the door of my building, set on getting dinner and working on my laptop at a local café, Fatset (Фацет / «cool dude»). I’m an American, and it’s the first week of January: a time for a special intensity.

But here in Ukraine it’s still the festive prelude to the Christmas season, which starts 7 January, according to the calendar of Julius Caesar, used by the western world until 1582 or so. With twinkles in their eyes, Ukrainians call this season «Ukrainian Ramadan,» with the only similarity being that it lasts a month.

So I fought my impatience and paused to say some season’s greetings at the concierge desk with the personnel, who are also my friends.

Through the closed door of the adjacent conference room I heard people singing.

«They’re practicing the kolyada – the Christmas carols,» said Lidiya, the clerk. Moments later seven people walked out of the conference hall. I tried to escape, to duck out but not before they said in English to me, «Would you come listen to our practice? We’re getting ready for our vertep on Christmas day.»

Damn. Vertep is a mini-play Ukrainians act out during the January Christmas season. My American brain was thinking, whoa, no, I don’t have time for this. It’s January, damnit. But the people kept pleading.

«Aw, how long will it take?» I asked begrudgingly, and rather ungratefully, even I think unpleasantly

Lidiya looked at me, perhaps seeing that my brain was combusting. Her look seemed to say: But you’re not in America. You’re in Lviv, and yes even though it’s January, it’s almost Christmas time: They invited you to the vertep practice, just shut up and go to the vertep practice! In other words: Just live.

I went into the conference hall, where the amateur troupe of actors had set up two chairs, one for me and another for Pan Ihor, the groundskeeper.

«We are the commissioners,» he said, laughing, in Ukrainian.

We sat like we were judges in American Idol or whatever, and then the troupe of seven or so people, all in their 20s and 30s, came in and in a semicircle they began singing the lively Ukrainian carols. Seven people singing a private show for me: I still felt uncomfortable.

I began to notice their subtle costumes: a woman carrying a scythe, the grim repeater; a guy who looked like Barstool Sport’s Dave Portnoy with devil horns, and the young woman who seemed to be the lead, dressed in normal modern clothes but with an angelic voice.

Each person had a monologue and for this they came right up to my face and spoke and then they went back to the singing. It was like a strange, haunting dream – except for the smiles on the actor’s faces.

They were both earnest and pious and also laughing at it all as they performed this pastiche they had written, which told the Christmas nativity story in their own way, best as I could tell with my Ukrainian knowledge – the grim reaper sliced Herod’s neck, I think – and they showed the application of Christmas in a modern way: the people rose against the devil who was trying to stir hatred of Jewish people.

I began to appreciate: They were singing well, acting well, and they were … joyful. As the devil did a jig, Pan Ihor laughed – and then, wonder of wonders, so did I.

Where the hell am I, in this pocket of the universe, where people live and celebrate without guile? It truly is a foreign experience for an American, or a western European, or maybe almost anyone in this jaded world, especially in this pandemic time.

People work hard here: They have to, to survive, but they balance the hard work with cheer. Earlier in the day, in between work and meetings, I delivered a package to a friend who owns a shop here. He had wanted Allbirds, the cool wool shoes not available in Ukraine, for himself and as a surprise for his wife. So my family in the States included them in a Christmas package.

I rushed over to my friend’s shop to deliver the shoes, and was about to rush out – rush, rush, always rushing–when he said, «We have a tradition here, when we get something nice and new we share a drink with friends. It’s обмити (obmyty)» – an oblation, something you pour out to thank the gods.

Ah, well, all right! He produced a bottle of wine, a French rosé, and so we drank it to toast the new shoes.

Later, after the vertep, when I made it to Fatset (Фацет / «cool dude») the café, some friends I hadn’t seen in a long time entered, including one from London. «I’m sorry, you’re working, we’ll leave you alone,» one of them said.

No: Today was not meant to be a work day. New shoes, vertep, old friends. I closed my laptop. Come on, it’s Christmas. When do we start living? When we’re dead, or while we’re alive?

After we toasted each other, I told these friends about my productive day: the vertep performance and about the drinks in honor of the new shoes. A friend, Rost, a musician from Lviv, said, «This is why I love Ukraine. It is a strange and great secret pocket of the world. People live here like they live in a different time. We are free.»

Lately of course Russia is making new threats against this country. And in the global media, Ukraine is portrayed as merely a beleaguered pawn. Its culture, strength, heritage: all these things are ignored. These headlines wear people down, perhaps causing people to stop believing in themselves. But they still keep going, aided by rituals and community. It’s hard to stay down and depressed here: People won’t allow it.

Isolation from people and history makes people crazy. This applies to lonely people in America and Japan, where there is widespread isolation, as well as to crazy dictators like Xi Jinping and Vladimir Putin. They have no space or time for conversations and so they cease to think.

As the beloved public intellectual Jordan Peterson posted on Instagram a few days ago: «People organize their brains with conversation. If they don’t have anyone to tell their story to, they lose their minds.»

The whole world might be mad, but there is sanity here in Ukraine, sanity in community and ritual, which creates the space for people to construct, live, and share the narratives of their lives. They even toast the arrival of new shoes!

At 11pm, closing time, I left the café with my friends and others who had joined. They stood in the misty air on the cobbled streets and began to sing a Ukrainian Christmas carol, one of the same songs I had heard during the vertep earlier, without guile or pretense – real cheer, like characters out of Dickens’s Christmas Carol.

Such authenticity is real and possible. I hope Ukrainians realize that what they have here, a real culture that touches, enriches, nurtures every bit of life, is a rare thing in 2022.

As I went home, and as I walk around on this sunny strange time-traveling January Christmas Eve morning, I can’t shake those words of Tom Petty:

«It’s Christmas all over again.»

And it’s a damn great thing.

«Be happy: It’s the most important,» a Ukrainian friend wrote today, as a Christmas greeting.