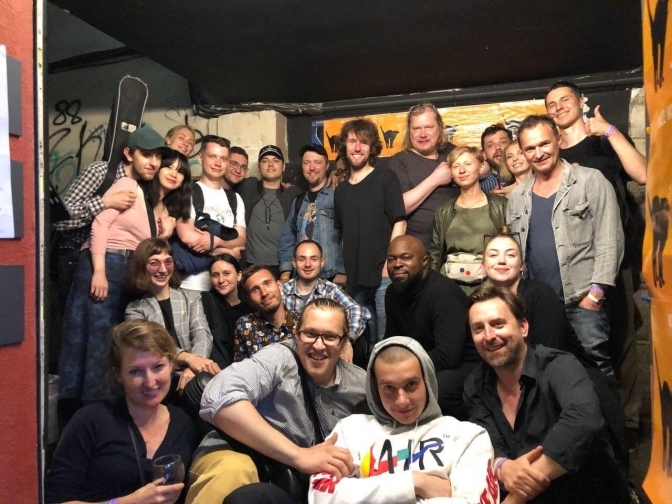 The scene outside LV Café, early morning, after a Leopolis Jazz Fest-weekend jam. Eric Worthman is in the second row, second from right .

There’s been talk among Lviv musicians that a special creative moment is developing here. «True art will take over the city very soon, something extraordinary and fresh,» Yakiv Tsvietinskyi, a Dnipro-born trumpeter now with the elite Swiss Focusyear jazz program, previously told Tvoe Misto/Lviv Now. But do outsiders agree? Seal’s music director and Adele’s former pianist, from Philadelphia, USA, says indeed there is a special spirit here – and so he’s coming back to the city’s LV Café Saturday 3 July.

Music is about connecting people, Grammy-winning saxophonist Kamasi Washington told me before his main stage show at last week’s Leopolis Jazz Fest. During the festival’s five days and nights-turned-to-mornings, these connections were on full display. In the stone passageway just outside of the LV Café, global stars mingled with the city’s jazz talent and local fans alike, humming like a gathering of old friends.

During a break between jams one night or morning in that alleyway, I overheard pianist Eric Wortham II, talking about a special spirit he saw in Lviv. Wortham is music director for British singer-songwriter Seal, one of the festival’s headliners who has sold more than 20 million records, Wortham has also played piano on tour with Adele and Jill Scott among other stars, so when he says a place has a special spirit, I figured he knows what he’s talking about. He became a new regular at the café throughout the Fest, and I asked him later on what it is he sees in this city.

«No jealousy but a lot of support and camaraderie»

«There’s an energy of family and community,» Wortham tells me, «There was no jealousy, but a lot of support and camaraderie, which is the breeding ground for any type of artistic explosion. A great deal of selflessness.»

«Appreciation for the art was at an all time high [in Lviv], as high as any other place I’ve been around the world,» he says.

Wortham, who has played all over the world, including a residency in Shanghai, is from Philadelphia – a place with deep jazz history, south of New York and north of D.C. His first night at the LV Café, he wore a t-shirt saying «Fairmount Park,» which incidentally is the city’s traditional Ukrainian neighborhood.

Philly, one of America’s oldest cities, is many centuries younger than Lviv but its music history is more storied in public consciousness, even if Mozart Junior did conduct at Lviv’s Grand Opera House. Home to the famed Academy of Music and other such institutions, Philly is the birthplace of Stan Getz and legends in many other genres, and Dizzy Gillespie and John Coltraine and scores of other greats called the city their home.

Wortham says Philly is not just a historic musical city, but a living one, with a special ethos similar to what he sees in Lviv.

«There’s an each-one, teach-one mentality [in Philly],» Wortham says. «If you see someone that has the love and desire and passion for the arts, often times without any invitation, an elder or someone with a great deal of skill will take that person under their wing and help them grow, provide them with resources, also make recommendations to performing arts venues to help them hone their craft.»

The idea of elders helping new generations of artists is a familiar concept in Lviv. Markian «Marek» Ivashchyshyn, who died in 2019, a veteran of the Student Brotherhood and wild first years of post-Soviet liberty, created the the Dzyga creative-hub at the end of Virminska Street and inspired many in Lviv and throughout Ukraine. Because of his club, many musical careers have begun – such as that of Nicko Shevelov, now a jazz drummer in New York (and in time Lviv Now will share more of these stories).

Marek’s mentoring legacy continues in many ways, including with Andrew Arnautov’s curation of the weekly jam sessions at the LV Café – and club owner Yurii Sadovyi working to keep the place amid the blows of the lockdowns.

«A place like [Lviv] is well deserved to have a jazz fest like I witnessed,» Wortham says. «I think a lot of the artists there appreciated the love and respect from the people as I did myself.»

Whether in the autograph lines backstage or the Grand Hotel and other venues where stars like Kamasi Washington came to jam, Ukrainians showed their love for the visiting stars, staying up all night to listen. 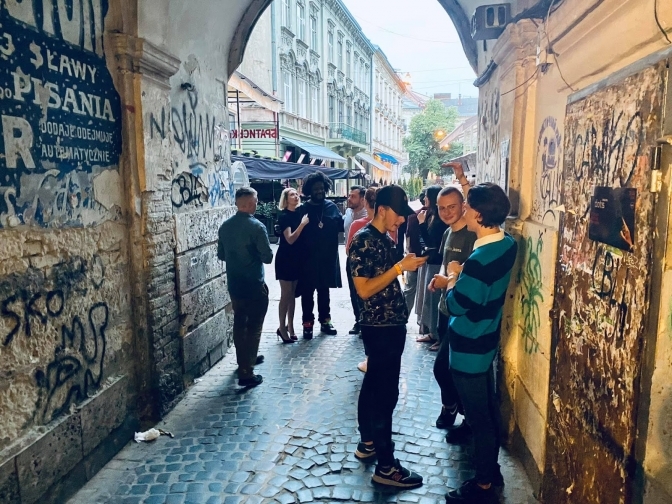 In the «jazz hallway,» the Kryva Lypa passage off of Sich Rifleman Street, Kamasi Washington talks with Yurii and Natalka, the owners and directors of LV Café, as dawn beaks. Photo by Nadya.

And maybe some lessons for Lviv?

Musically, Wortham says, Philly knows what it is. It has an identity, perhaps lessons for the developing scene in Lviv.

«Philadelphia is very very very very rich with jazz history, not just jazz history, but musical history,» Wortham says. «There’s a great sense of pride and self and legacy that artists have that keeps us from conforming and jumping around and being swayed by a lot of the new fads. We hold on to what’s tried and true.»

«The opinion of others is not something we hold in high regard. Rather, he says, «We hold in the highest regard respecting the craft and the legacy of the music.»

In 2019, Wortham, on his first visit to Ukraine, came to Lviv to give a master class with jazz vocalist Laurin Talese. Then, this year, Jaryna Maychyk, pianist with local band FunkQ, was Wortham’s official guide during the Leopolis Jazz Fest. They both recalled she had attended that master class.

«After checking out some of her clips on Instagram, I realized she’s a bright pianist with a bright future and so I’m going back to see the evolution of that,» Wortham says. He pledged to come to her show this Saturday: the cycle of mentorship and musical connection strengthening in Lviv.

«The role of musicians has been and always will be to bring people together and to connect people,» Kamasi Washington told me, before his main stage show Sunday. «Like we saw last night at the jam session [at the LV Café], when you’re playing music even with people that don’t speak the same language, now we have a connection.»

Wortham will play Lviv this weekend

Wortham will play the LV Café Friday 9 July, 21:00, as part of the Julia Shved Quartet, along with Serge Fedorchuk and Edward Markos. Entrance is 200 uah. Location. Stay tuned to Lviv Live Music for more concert updates.

From the Philly Pops, here is a video-masterclass from Eric Wortham (24 minutes).