Lviv gambit or 64 squares for happiness 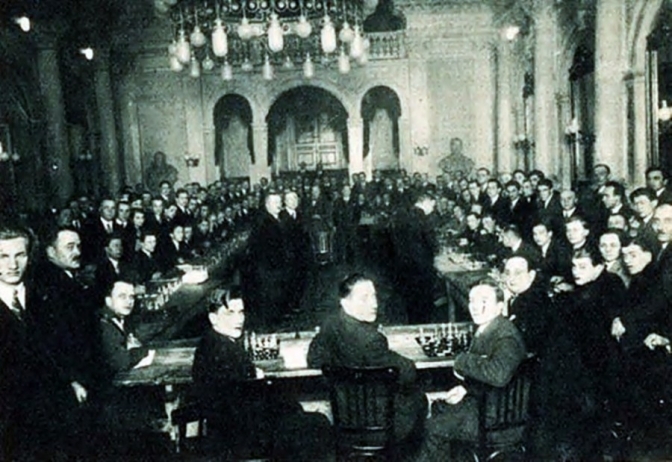 July 20 was International Chess Day. The world has been celebrating this holiday for 55 years. In 1966, FIDE (French acronym for The International Chess Federation) decided to celebrate the holiday of chess in the middle of summer. How the history of chess is connected with Lviv, how the people of Lviv were fascinated by this game, where our compatriots played chess, and who received the title of grandmaster – Lviv guide Oleksandra Diabina narrates

Chess is a game that has passed through the centuries, suffered ups and downs, was once banned by the church, became a sport, and received an army of supporters and followers. A game available to everyone, but only a few succeed in it.

Despite the rapid technical progress in our charming Lviv, it’s still possible to observe a rare phenomenon when local residents sit in small groups in parks or on the «stometrivka» («the hundred-meter distance» promenade) in front of the Opera House and play chess. In the golden time of Austrian rule, the people of Lviv began to discover the wonderful world of this intellectual game. The first mention of the popularity of chess appeared in Austrian newspapers that narrated to the city audience the amazing adventures of figures on the field of black and white squares. In the middle of the 19th century in Lviv more and more Lviv residents plunged into the game. Mostly, it was a game of students and intellectuals who gathered in coffee shops or private homes. Together, they improved their skills in this complicated game.

The game wasn’t widespread initially, but in the 1870s and 1880s the situation changed dramatically, it captured a wide audience and became popular. Chess players gathered in libraries, reading rooms, premises of Lviv University and Polytechnic. Mostly, they were active students, teachers, and professors. From year to year, the chess movement in Lviv was gaining momentum and becoming more noticeable. In the 1890s century, chess games became commonplace in public institutions. Historians mention the famous «Vienna Coffee House«, still a restaurant today, where its owner’s son-in-law Alexander Loria organized the games, because he was an ardent fan of the game himself. He organized a separate room for this purpose. The first chess tournament in Lviv was n 1894, on November 25 at «Grand Hotel». There were 45 participants, 8 of them reached the final, and Lviv notary Ignacy von Popel became the winner. Then the chess club was created, and Count Michał Mionczynski was elected its president. The «Grand Hotel» became the main headquarters for chess battles. However, the game was booming in other Lviv locations, in particular the popular cafe «Avenue» on the corner of the current Svobody (Freedom) Avenue and Copernicus Street, as well as the restaurant «Ritz», which is now known as «Puzata Khata« on the corner of Sichovykh Striltsiv (Sich Riflemen) and Kostiushka streets.

Chess communities were relatively closed and formed on national grounds. Jews, Poles, and Ukrainians played separately and didn’t cross paths. Ukrainian chess players gathered at Kostiushka 1 at the «Narodna Hostynytsia» («People’s Hotel») on the corner of Doroshenka and Kostiushka streets, where the customs house is now located. Also «Roma» coffee shop on the corner of Shevchenko Avenue and Fredra Street was quite popular. Lviv residents played, but tournaments were held very rarely.

The second tournament took place 10 years after the first one – in 1904, the winner of the tournament was Emil Gross. The next competition took place before the First World War.

The era of the Lviv chess renaissance begins in the interwar period. In the 1920s, the chess environment was restored and intensified. [The chess club] started to hold the Lviv championship on a regular basis, seven times the championship was won by the Polish chess player Heinrich Friedman, who, unfortunately, tragically died later in Auschwitz. The popularization of chess was facilitated by the arrival of famous chess players who held sessions of simultaneous play. In 1924, it was the Serbian grandmaster Bozidar Kostic, in 1928 – the world champion Alexander Alekhine, in 1931 – Akiba Rubinstein, in 1933 – the Austrian chess player Rudolf Spielman. In 1930, the title of Lviv’s winner was given to a Ukrainian Stefan Popel – a man with an extremely interesting destiny. He was an invincible Lviv chess player for almost 10 years. Stefan Popel was extremely gifted, knew eight languages, in 1931 received a master’s degree in Franco-Latin philology from the University of Lviv, in 1938 became a master of law. He worked as a secular secretary of Metropolitan Andrei Sheptytsky, used to be a teacher, and editor of Lviv magazines. He later emigrated to Paris, where he became a three-time chess champion in 1951, 1953, and 1954. In 1956, he moved to the United States, where he lived the rest of his life and died in 1987. In the United States, Popel was active in chess, organizing tournaments and chess schools. He also played with a young chess prodigy Bobby Fisher. Jews were particularly strong chess players. In Lviv, the most famous of them was Isaac Schechter, who at the beginning of the war joined Anders’ Army, the Polish army of Władysław Anders, with whom he went to the Middle East and remained in Palestine (under British command in World War II). He later played for the Israeli team under another name, Isaac Aloni.

After the Second World War, the checkmate was set for the world of Lviv grandmasters. Heinrich Friedman died, Stefan Popel, and Myroslav Turianskyi found themselves in France and the United States, the Turkevych brothers in Canada, Yaroslav Shevchyk in Australia, and only Mykhailo Romanyshyn, the father of the future international grandmaster Oleg Romanyshyn, remained in Lviv.

Lviv’s chess environment was almost completely rebooted, as was the city’s population. In 1947, the famous Oleksii Sokolskyi came to Lviv, and later a new bright star of the world of chess, Leonid Stein, broke out in Lviv. The Stein family lived on Fredra street, which determined the fate of the boy, because, as we know, there was a chess club there, where Lviv players grew and formed. Stein was a real prodigy and, like Julius Caesar, knew how to do many things at the same time: play chess, smoke and play billiards. In the late 50’s, Leonid Stein became the champion of Ukraine, began to play for the USSR, and in 1962 became grandmaster. With the American Bobby Fischer he played on equal terms, and Fischer, as it’s known, didn’t sit at the chessboard with anyone. Leonid died early, at the age of 39.

The next Lviv grandmasters were Victor Kart’s students: Oleh Romanyshyn, Marta Litynska, Adrian Mikhalchyshyn, Oleksandr Belyavsky: They were the ones who glorified our city all over the world. I would like to mention Vasyl Ivanchuk, a grandmaster who has a significant name in the elite world of chess, who is not indifferent to the future of Lviv children. He created his own school and teaches little Lviv residents to play this game. In many countries around the world, chess is a compulsory subject in the school curriculum, and rightly so, because it’s the best way to «pump» your gray matter, improve neural connections, develop strategic thinking, and, if lucky, glorify your city and country to the whole world.

We have a good opportunity to get a black and white board for 64 cells from the drawer and play with 16 pieces and 16 pawns. We have something to be proud of in our hometown of Lviv, which retains the status of an honorary uncle in the mysterious world of chess.

The history of chess begins in India in the fifth and sixth centuries. The first game was called «Chaturanga» – it was a square board, 64 squares, 16 pieces and 16 pawns. In the sixth and seventh centuries, the game came to the Arab world and Southeast Asia. It reached Europe in the eighth century. In the ninth, the game appeared in Kievan Rus, what is now Ukraine. Chess pieces were found in archeological excavations in Vyshhorod, Kyiv, Turov, and Chorna Mohyla near Chernihiv.

In 1066, when the Normans arrived, chess spread to Britain, where developed the term «checkmate», which means «the ruler is overthrown» in Persian. In 1471, the first work entirely devoted to chess was created – the Hittingen Manuscript. In 1550, the first chess club was established in Italy. 1561 – The first chess textbook is published, in which Rui Lopez describes the stages of the chess game: debut, middle game, endgame, and «gambit»--​​the latter meaning an opening move in which a player risks a minor piece to gain an advantage.

In 1905, the title of «grandmaster» was used for the first time at the tournament in Ostend, Belgium. In 1924, the International Chess Federation was established, which took over the organization of the World Chess Olympiads. In 1966, the same organization decided to celebrate the International Chess Day, which was joined by Ukraine. Interestingly, in 1997, the Deep Blue computer first defeated world champion G. Kasparov.

It is also interesting that in the early days of the spread of the game in Europe, the Christian church was actively opposed to it, and here the church was united and it was supported by all branches of Christianity. Catholics forbade playing chess and keeping them at home, and the Orthodox could excommunicate chess players, but this did not diminish the popularity of the game. Over time, intolerance of chess gradually declined and bans on the game disappeared. Chess spread through the territories, captivated the minds and hearts of people, contributed to the development of mental abilities and strategic thinking. They were a favorite game of monarchs, emperors, princes, cardinals, as well as people from different walks of life, merchants, artisans.

Photo from the site Photos of Old Lviv

The author’s column is a reflection of the author’s subjective position. The editorial board of «Your City» does not always share the views expressed in the columns, and is ready to give dissenters the opportunity for a reasoned answer.