19:01 06 October 2021
Tweet
178 0
Following the birthday of Lviv Opera House, we offer you to recall several facts from its history and see how it changed through the years. 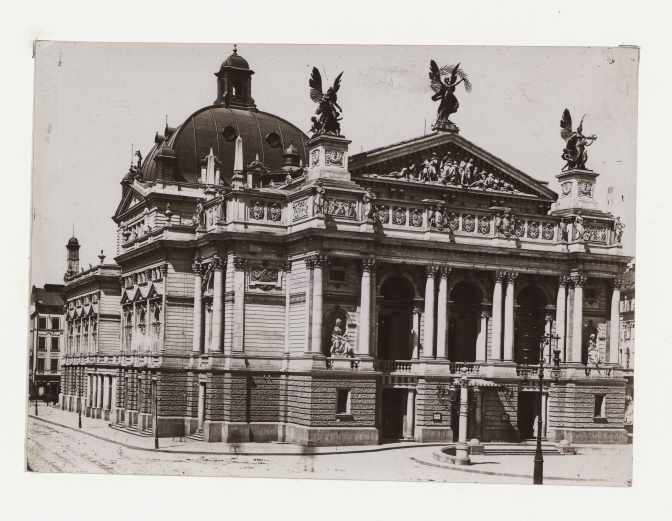 On Monday, October 4, there was a 121 birthday of Lviv National Academic Theatre of Opera and Ballet named after Solomiia Krushelnytska, or simply Lviv Opera House. It was opened in 1900 with a premiere of lyrical-dramatic opera "Yanek" by Vladyslav Zhelenskyi, which narrates the life of Carpathian highlanders. Ukrainian tenor Oleksandr Myshuha performed the main vocal party.

On the Lviv Opera’s birthday, we offer to recall some facts from its history and the way it has changed over the years.

On July 12, 1895, the magistrate of Lviv announced a contest for the design of a new theatre. However, due to its strict conditions, the contest committee received only two projects until the deadline, which was set on the first day of the following year. The first prize went to the project "Ludendo monet", prepared by architect Zygmunt Gorgolevsky, the second one was given to the project "Justitia" by Jan Zavejski. 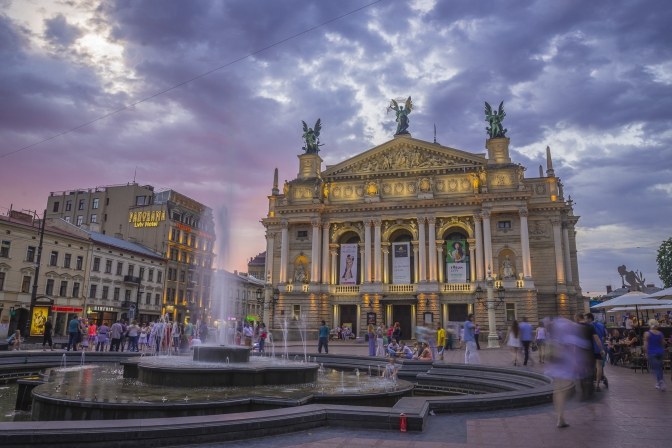 Both architects were given extra time to finalize their designs until April 30, 1896. Finally, Zygmunt Gorgolevsky, then director of the Lviv Higher School of Arts and Crafts, became the winner. Following his designs, many elements of the exterior and interior decoration of the theatre building were made later. In 1901, the architect was awarded the Order of the Iron Crown of the 3rd class for this project. He implemented it with the help of his assistant - architect Jan Noworita. 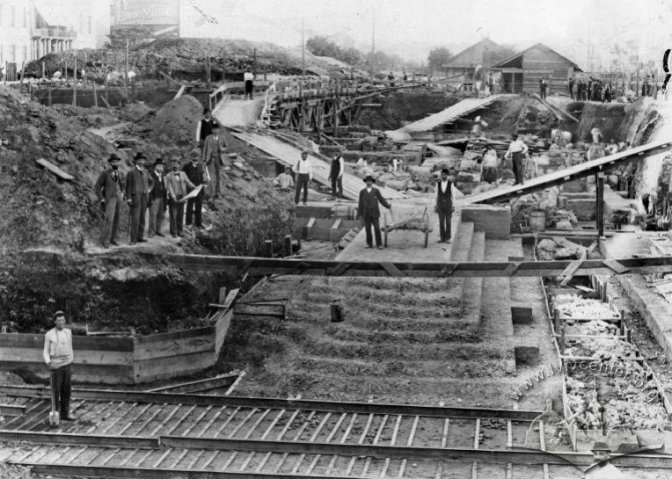 The construction of the Big Theater, one of the most beautiful buildings in the city, cost 2,500,000 crowns, or $ 500,000. After its construction, the Golukhovsky Square as such ceased to exist - the building took up the entire area, the neighbouring houses were restored, flower beds in front of the theatre were arranged. The theatre building was visible from afar, from the beginning of the Hetman's Walls on the sq. Mariatska, and it closed the ‘avenue du teatre’. The building area was 3,000 square meters 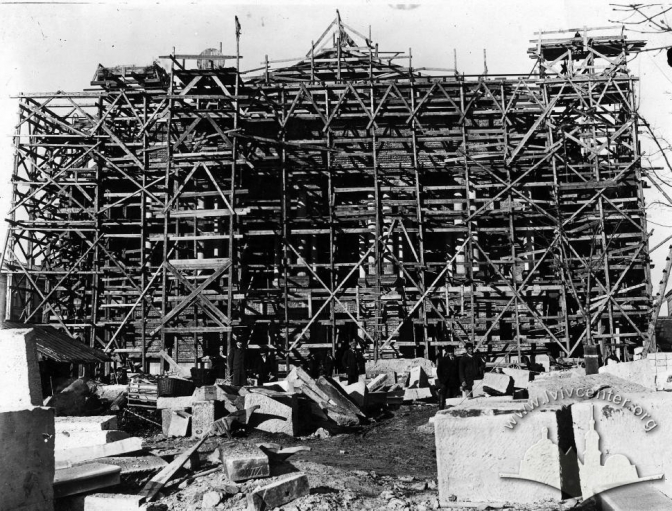 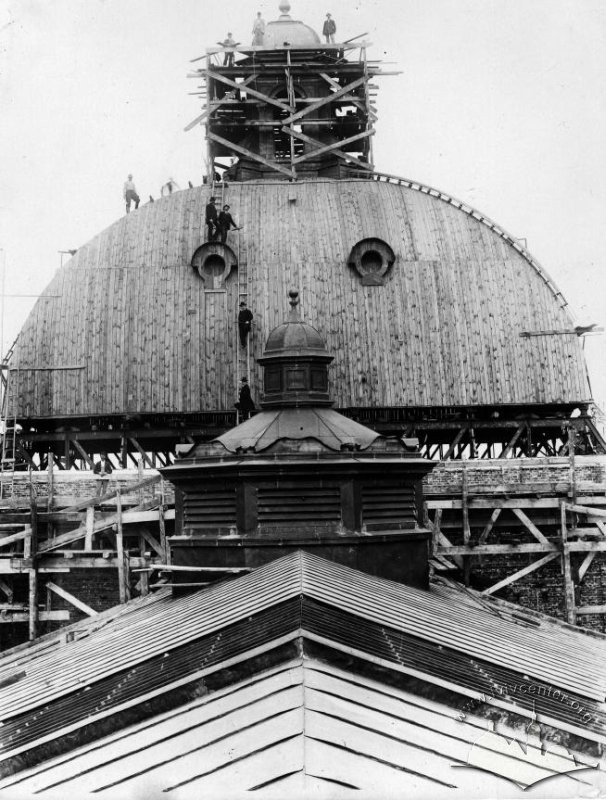 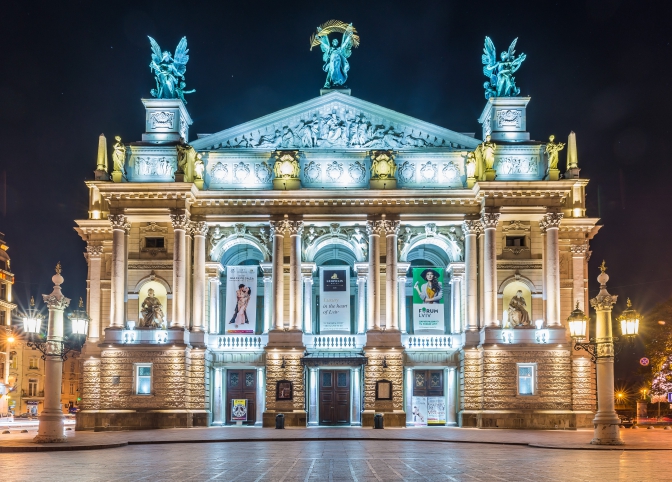 The theater was built during 1897-1900. To lay the foundations of the future building, the architect proposed to change the course of Poltva, which then flowed under the street from the current Maria Zankovetska Theatre and under sq. Rizni. 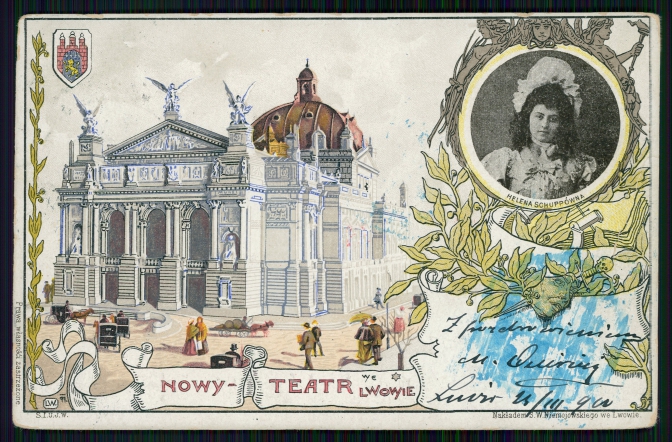 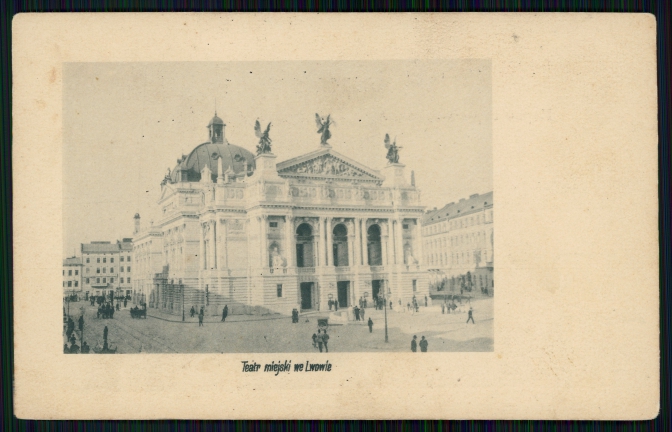 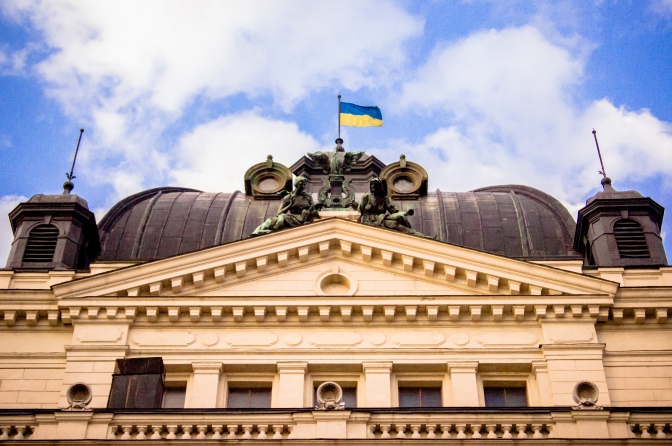 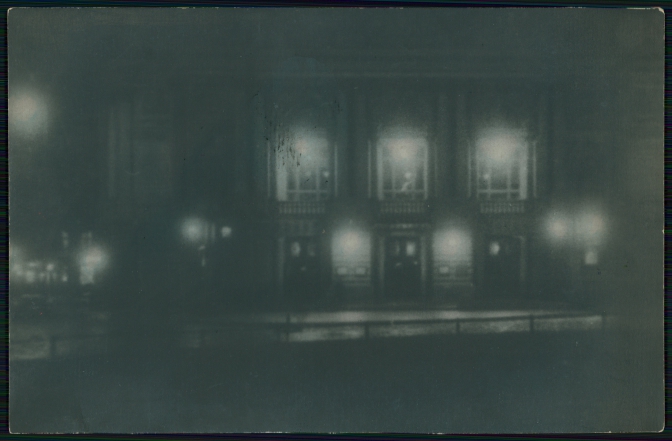 The cycle of construction works, which consisted of earth, concrete, masonry and stonemasonry stages, was executed by the architectural and construction union of Ivan Levynskyi and Józef Sosnowski. 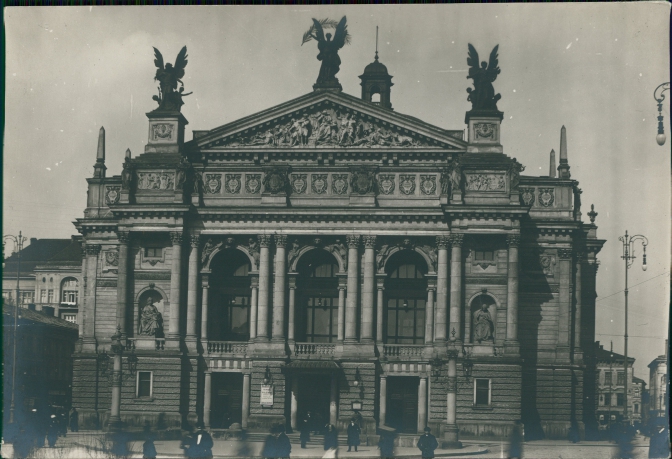 Earthworks began on June 5, 1897. A pit with a volume of 16,500 cubic meters was dug manually. During these works, the builders discovered the foundation of old defensive walls and the remains of oak piles, which used to strengthen the banks of Poltva river. This foundation, which was, apparently, a part of a bastion built in 1703 to protect the northwest corner of the Low Castle, crossed the pit diagonally.

On August 21, 1897, the concreting of the strip foundation under the future theatre began, which was accepted by a special theatre commission chaired by Gwalbert Zembitsky, consisting of the members of the Polytechnic Society. The asphalt waterproofing was made by the owner of the asphalt and roofing material factory Stanislav Sheliga Lyshkevych. 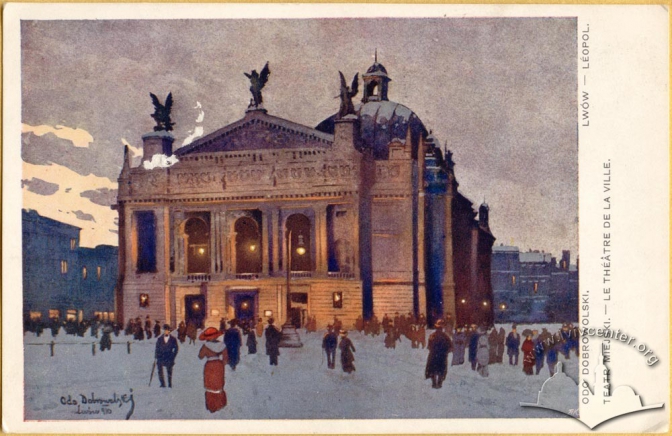 The postcard shows a view of the evening Opera House by Odo Dobrowolsky, dated 1910. In the foreground of the picture, you can see people walking in front of the Opera House, which was built in 1896-1900 by architect Zygmunt Gorgolevsky. 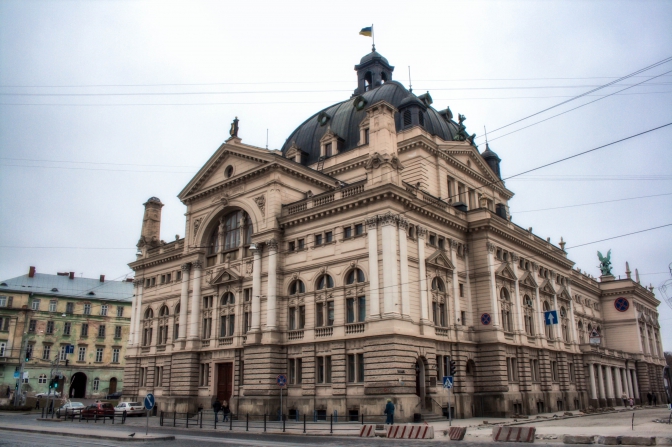 Source: wikimedia.org. Author: Zoryana. License Carpentry works were performed by Krykevych's firm and the Vchelyak brothers, painting - by Pridle and Kachorovsky, glasswork - by Kupfer and Glazer, a tinsmith by Henryk Bogdanovich, and blacksmith and locksmith by Gottlieb and Svoboda firm. The metal structures of the roof and the stage were supplied by the Machine and Wagon Factory in Sianok, and the electric lighting was supplied by the German company Siemens and Galske. The ventilation of the Opera House was performed by Johannes Haas from Vienna in association with the Lviv resident Vladislav Niemeksha (1862–1905). Fresh air came to the theatre premises from a nearby kiosk (near the side facade of the old Stanislav Skarbko Theater - now, the Maria Zankovetskaya Theater). 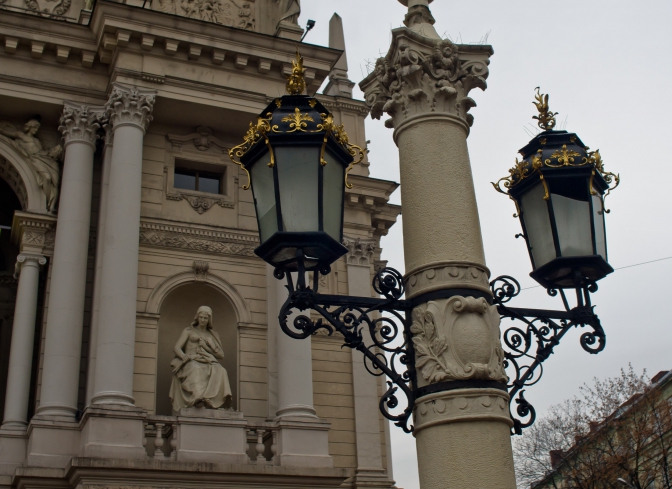 In the kiosk, built in the shape of a rotunda, the air was cooled, cleaned and then fed to the auditorium through a system of special holes in the floor. The used air was removed through a series of vents located under the edges and in the four corners of the ceiling, covered with a decorated lattice. This lattice was made according to the sketches of the theatre’s author, architect Zygmunt Gorgolewski. The air was then vented through four ventilation shafts disguised as decorative lanterns at the corners of the theatre’s dome. 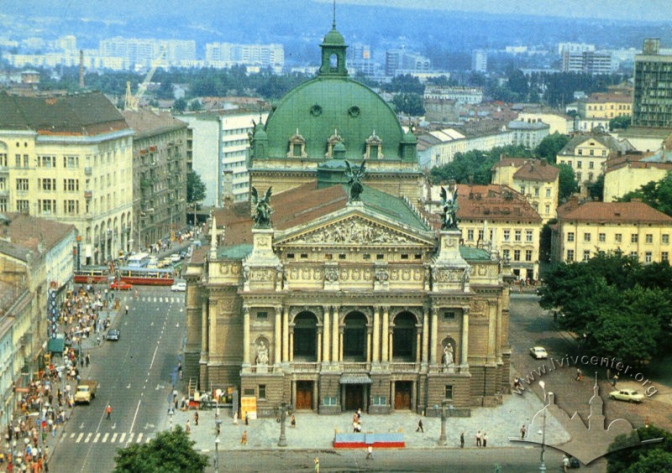 On the right hand in the background, you can see construction works on the st. 700th anniversary of Lviv. On the site of a huge outdoor market at the back of the theatre (where in the postwar period you could buy everything from tiny stones to lighters or paintings by famous Western European artists) the largest at that time hotel "Lviv" was built in 1965.

Collection: Center for Urban History of Central and Eastern Europe

The grand opening of the theatre took place on October 4, 1900. Soon, the ground under the theatre began to sag, even more intensely than the designers had anticipated, so cracks began to appear on the walls of the building. In July 1903, Zygmunt Gorgolevsky died suddenly of paralysis of the heart’s aorta. 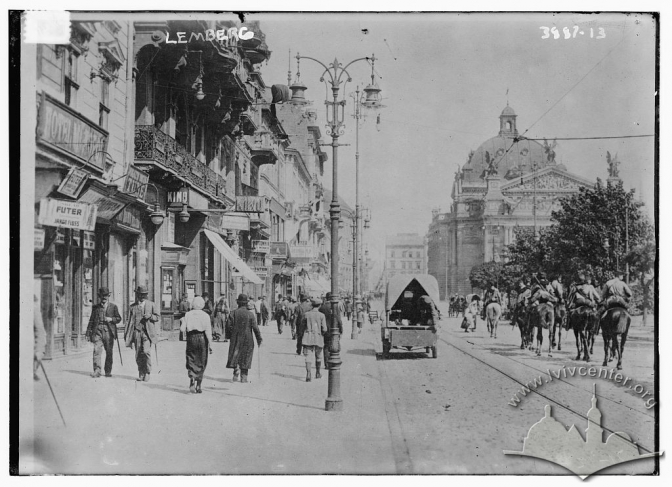 Karl Ludwig Street (now the odd-numbered side of Liberty Avenue) was recorded during the WWI Russian occupation of the city (September 3, 1914 - June 22, 1915). This is evidenced by the presence of the Cossack horsemen travelling in the Opera House direction. The street had a tram rail, which currently doesn’t exist anymore. In 1914, trams KD (main station-industrial school), HG (from "Vienna" cafe to Zhovkva slingshot and Gavrylivka), HZ (from "Vienna" cafe to Zamarstynivska slingshot) ran here. 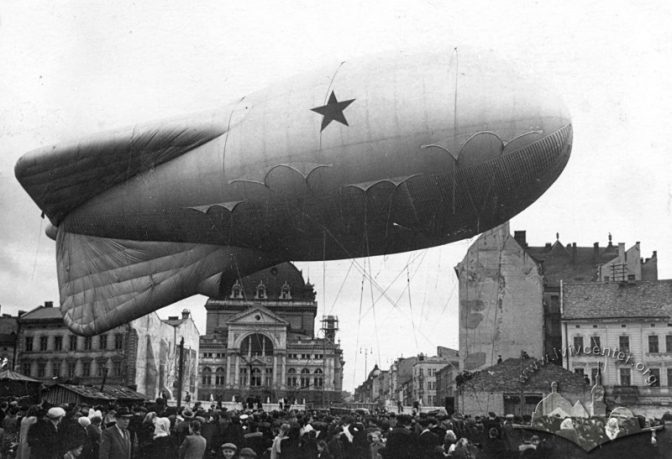 The picture shows the post-war market on Zernova Square - a flea market that took up space from the Opera House to the bridge on Peltevna street, now Chornovola Avenue. The bazaar operated almost around the clock, and right in this area among a large concentration of sellers, buyers and pickpockets, people could buy scarce goods. The best selling product was "bimber" - moonshine expelled from the ingredients which weren’t known for sure to anyone (from the memoirs of Vladimir Rumyantsev)

“Back in the early 50s, in Lviv, during the public holidays (I don’t remember whether on May 1, or November 7, or maybe both), the"Airship" was raised over the city - in fact, it was an air defence balloon. It was lifted from the square, where the Lviv Hotel is now, and the ropes were attached to the trucks. The balloon was probably 60 meters high, it had a huge flag with profiles of "the main Marxists of the planet", and at night this construction was illuminated by searchlights from the High Castle and the Opera" (from the memoirs of Yurii Skoblenko).

A high artistic value is present in the monumental parade curtain of the stage with a picturesque allegorical composition "Parnassus", which was specially ordered for the theatre by the famous artist of the academic school Henryk Semiradsky, who lived in Rome at that time. The artist did not have time to fulfil the order before the theatre’s opening, so the curtain arrived in Lviv on October 16 and was first shown to the audience on January 13, 1901. Since 1967, Semiradsky's painting is owned by the Lviv Art Gallery. 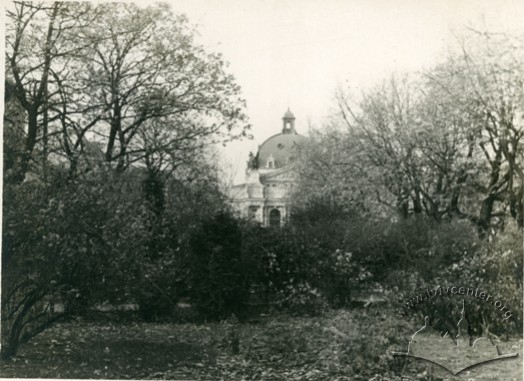 The greenery of the alley on Svobody Avenue (at that time, Lenin Avenue), through which the building of the Opera House can be seen. 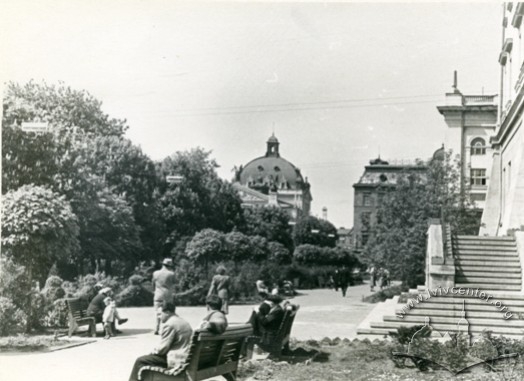 Svobody Avenue; right stairs of the Palace of Pioneers. 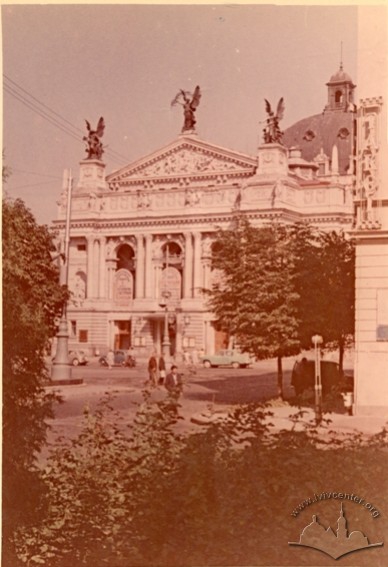 Opera House with posters of comedy theatre tours; cars "Volga" GAZ-21 and "Victory" GAZ-20M. At the intersection of st. Lesi Ukrainky and Svobody Avenue (Lenina) there was a taxi parking, as evidenced by a special pillar on the corner. 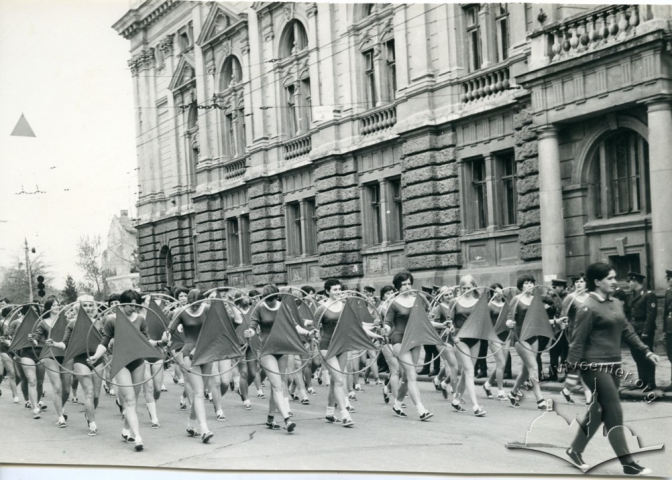 From 1978 to 1984, the theatre was reconstructed. During this period, in particular, the curtain of the stage was restored. Today, it’s carefully guarded, the modern spectator can see this curtain exclusively at the premiere performances and during the big celebrations. In 2002, a bronze sculpture of the Patron of the Theatre, a prominent Ukrainian singer Solomiya Krushelnytska, was installed in the centre of the theatre hall.

Photo on the background of the Opera House 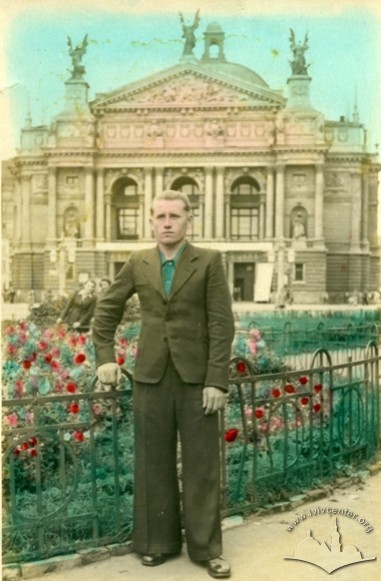 Painted black and white photo with the image of a man on the background of the Opera House. 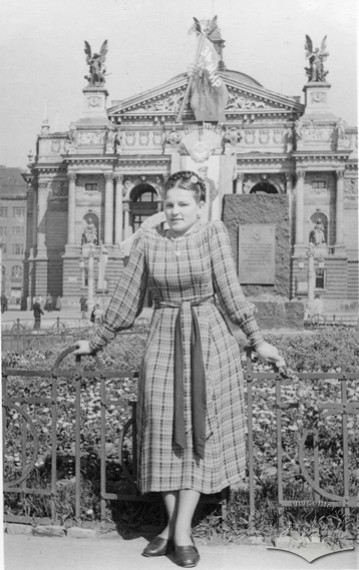 Portrait of a woman in front of the Opera House on May Day Avenue. Behind the stele, which marked the site of the monument to Vladimir Lenin. 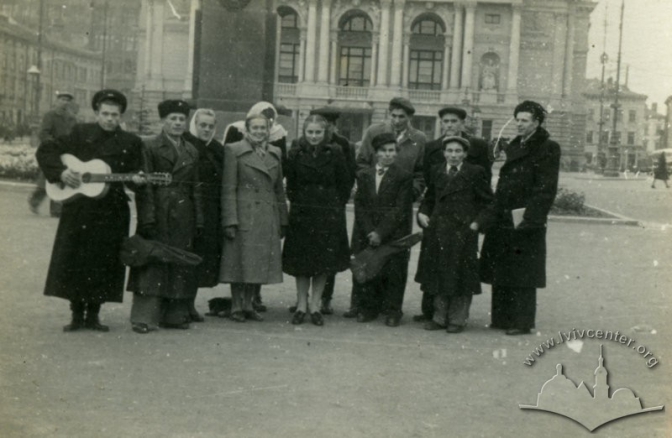 Young musicians from Olesk in Lviv in front of the Opera House. 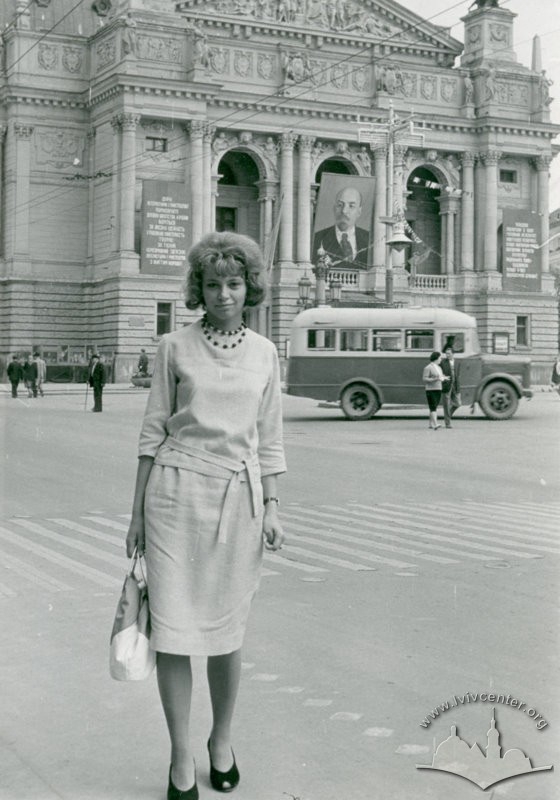 A woman posing for a photographer is standing on the roadway of Lenin Avenue (now Svobody Avenue). The woman is dressed in the fashion of the mid-1960s. The absence of traffic on the street may indicate that the action takes place on a public holiday, when traffic was prohibited on the main street of the city. In the background, near the Opera House decorated with visual agitation (portrait of Lenin and posters with slogans), there stays a city bus PAZ-651. 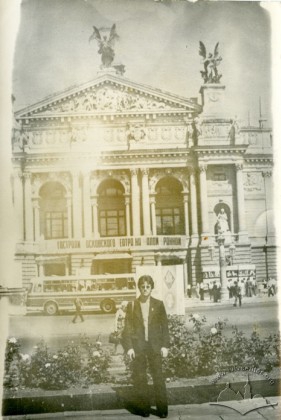 Viktor Lasayev is an engineer at the Lviv Research Radio Engineering Institute against the background of the Opera House (at the theatre, there is a poster about the tour of the Moscow Drama Theater on Malaya Bronnaya). 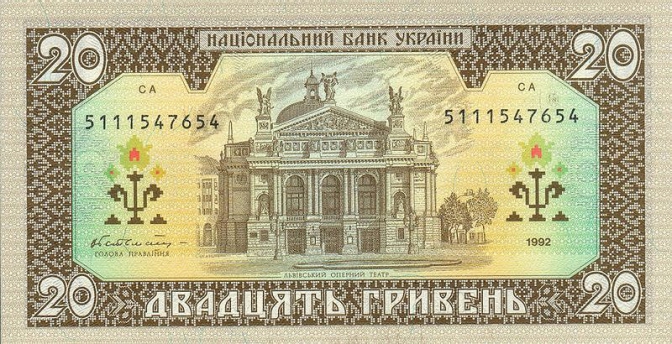 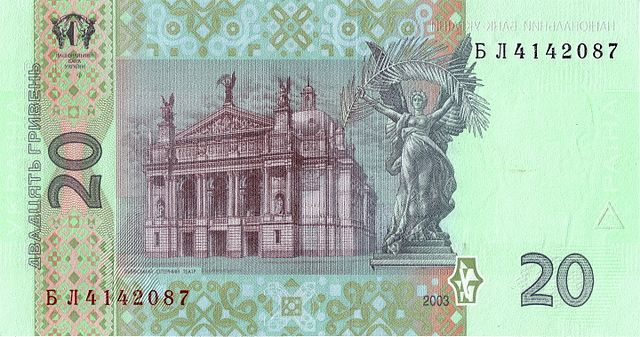