Metaphors don’t work against arms, or why poetry doesn’t help

18:07 21 June 2022
Tweet
85 0
When there is a war in your country, part of the territory is occupied, and people die every day, it’s difficult to be above that and talk about poetry. During her speech at the opening of the Berlin Poetry Festival on June 18, Ukrainian poet and literary critic Halyna Kruk explained why there is no place for poetry and tolerance of enemies in the bloody war. 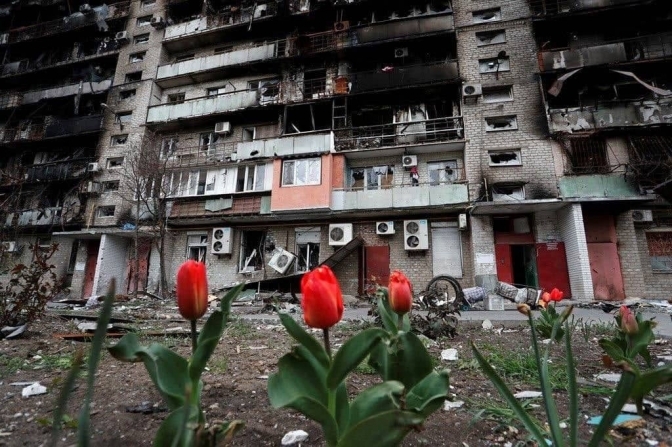 In June 2014, during a literary performance in good old Europe, when Russian tanks were entering our Donetsk or Luhansk regions in columns, I said that in this situation, it’s difficult for us, Ukrainians, to talk about poetry. The moderator, a 30-year-old Russian woman from Berlin, rushed to instruct me that poetry should be above war, that great Russian culture is always above war: Tsvetaeva, Akhmatova or Pasternak never went down to such low hype topics as war, they looked into eternity, they were above it. And in general, what is Russia for. For eight years, we have been trying to reach others: hey, we have a war, part of our country is occupied, we are being killed every day. We, as foolish children, were scolded and advised: do not shoot back and it will stop, be wiser, be above it.

All these 8 years, Russia has been increasing its military resources and preparing for a full-scale invasion, and its appetites have been growing. Russian poets stared at eternity, not noticing that their country was becoming an authoritarian state that merely imitated democracy, cultivating imperial narratives of greatness. Those who became quite uncomfortable left there, continuing to show Russian culture everywhere as the main facade of Russia. I understand that you, taught and brought up by the best examples of Russian culture, will not like my words. You may not even believe in them, as the inhabitants of Borodyanka, Hostomel or Bucha near Kyiv did not believe that the Russians came to kill them, civilians, without weapons, without reasons and grounds, indiscriminately. Whether men or women, children or the elderly. Kill, rape and squeeze with tanks. I don’t know of any metaphors that can make these words more appealing, or at least not so shocking.

Metaphors do not work against a person with a machine gun, no poetry protects when a tank hits your car, in which you and your children are trying to escape from the war. There is no place for poetry when you do not leave the cluttered basements of high-rise buildings for several days and hear your children and grandchildren screaming under the rubble, and you can’t save them from anywhere. This is a very strong plot, on which a European writer could write a book for eternity, which will be read and re-read. But the person who survived it will not write. Because there are no such forces to survive all this and stay with the ability to explain their pain to others.

The war makes a gap between those who have experienced it and those who are at a distance from it, with each day of the war I see that it is harder and harder to explain to people outside what we feel here, inside. I want to explain less and less. We speak an increasingly incomprehensible language, we do not like poetry. When you have a husband at war, some relatives in a terrible occupation in the Kherson region, and others – under constant shelling in the Kharkiv region, when you have to constantly reckon with air-raid sirens, because after them it sometimes flies and kills, it’s hard to be above that. Poetry then takes very peculiar forms – spontaneous prayer, stingy testimony, lamentation or even cursing the enemy. These are not the forms of poetry to which modern European culture is accustomed, they are functional and ritual, too primitive in their emotions, too subjective, too pathetic, intolerant. It’s hard to be tolerant of an enemy who kills you or your children. Because after killing some, he moves on to the next. I don’t think you could be above that.

One-fifth of my country is now temporarily occupied. I’m sorry it’s not a metaphor. People from the occupied territories are being killed, terrorized, taken to filtration camps in Russia, parents and children are separated, and denationalized. No poetry has words for this. My news feed on Facebook is full of photos of incredibly beautiful people – men and women, someone’s parents, someone’s children who were killed by Russia. This is not a metaphor. Facebook blocks or deletes these photos as sensitive information that can upset social media users. These people were not born to die in war, they did not get a higher education or a rare profession to die in war, they did not cultivate their talents to die in war. From the loss of these people, we will always have a gaping wound – in our souls, in our culture, science, economy, industry, and society. This is not a metaphor.

I do not know poetry that can heal this wound. This war kills us all, each in his own way, although outwardly we may look whole and unharmed, but we are now moving in short runs through life, even in the open, we are startled by loud sounds and our little children who have experience sitting in basements under fire, do not cry for fear. Even so young, they understand that crying can cost a life. And this is also not a metaphor.

The war makes everything so clear that there is almost no room for poetry. For testimony only.

But who is now writing beautiful and profound poetry for eternity about this war – these are our Russian colleagues, in a safe place, in exile, not under fire, not forgetting the creative search and without distraction from the dirt and disgust of reality. And no siren, no shelling and no occupier with a machine gun or tank prevents them from concentrating.

The author’s column is a reflection of the author’s subjective position. The editors of «Tvoe Misto» do not always share the views expressed in the columns, and are ready to give dissenters the opportunity for a reasoned answer.