14:55 09 November 2021
Tweet
259 0
An ‘act of vengeance’ or a ‘reopening’? The Kyiv Post closed 8 November ‘for a short time’ says the homepage headline, while ex-staffers cite recent differences with Adnan Kivan, the Syrian-Ukrainian who bought the 26-year-old media outlet from a Pakistani tycoon in 2018. 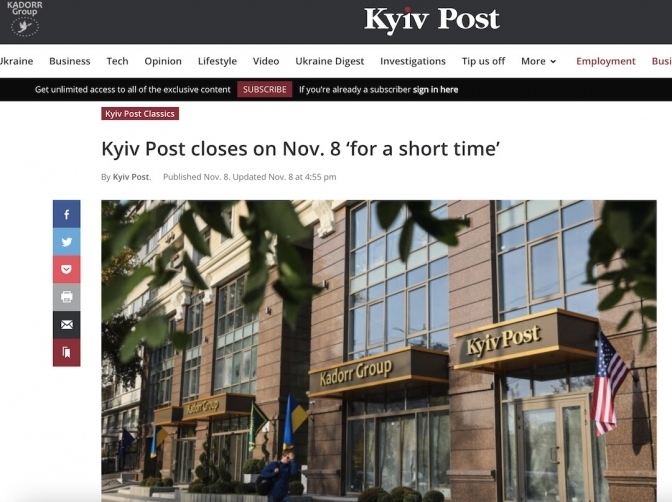 Monday morning, 8 November, when the Kyiv Post staff entered the office in the Ukrainian capital, long time chief editor American Brian Bonner had a startling announcement: Adnan Kivan, the paper’s Odesa-based owner, had decided to fire everyone, effective immediately. The news operations at the 26-year old English-language media outlet were suspended «for a short time,» declared the headline at the paper’s website. It is now emerging that ownership and the editorial team seemed to have had disputes the past three weeks but details are unclear.

«God bless all of us. One day, we hope to reopen the newspaper bigger and better,» said owner Adnan Kivan in the only story posted yesterday at KyivPost.com. «I thank the entire Kyiv Post team and Brian Bonner for his service to Ukraine and independent journalism in the past 25 years.»

Meanwhile the largely Ukrainian staff, which numbers about 50, collectively released a statement, which they individually shared on their personal Facebook pages. It is not known if all ex-staffers concurred on the statement.

«Three weeks ago,» the statement read, «the Kyiv Post’s owner, Odesa construction tycoon Adnan Kivan, had other plans: To expand the Kyiv Post and launch a Ukrainian-language outlet under the paper’s brand.»

Kivan also allegedly said three weeks that there would be a new editor but did not offer a name. It seems that this announcement created open enmity between the owner’s team and staff.

«The newsroom’s attempt to save the editorial independence of the Kyiv Post elicited opposition from our owner,» continued the staff statement. «We consider the cessation of publication and the dismissal of the paper’s staff to be an act of vengeance by Adnan Kivan. He has officially announced plans to ‘reorganize’ the Kyiv Post and to restart operations in a month with a new team. We see this as the owner getting rid of inconvenient, fair and honest journalists.»

Still, the now ex-staffers said Monday’s firing was a surprise.

«We decided we need to explain the situation to our readers in English and to the journalism community in Ukrainian,» said Thaisa Semenova, an alumna of the journalism program at Lviv’s Ukrainian Catholic University, who until Monday was a Kyiv Post reporter. She said Kivan, who lives in Odesa, rarely visited the Post’s offices in Kyiv.

In March 2018 Mohammad Zahoor, a Pakistan native, sold the paper for something more than $3.5 million, though the exact amount has not been disclosed, to Kivan, a Syria native who is now a Ukrainian citizen and one of the most successful businessmen in the southern city of Odesa, on the Black Sea.

Kivan’s Kadorr Group has significant construction and residential and commercial real estate projects in the Odesa region, with one of its brands housing more than 70,000 people. The group also owns Odesa’s Channel 7 (7 Kanal). Here is the website of the Kadorr Group, which Kivan leads, and here is one of Kadorr’s properties. 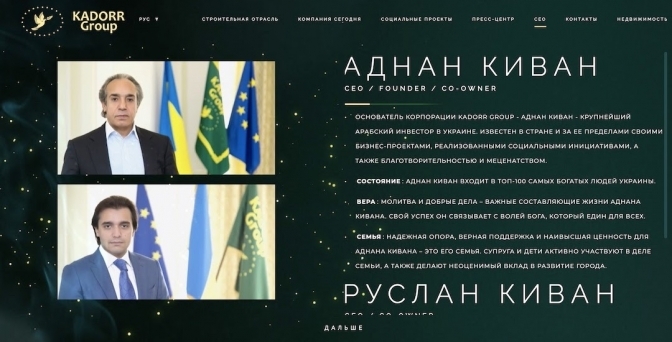 At the time of that sale, the Post reported outgoing owner Zahoor’s thoughts about Kivan:

«After meeting him once about two weeks ago, Zahoor said he is convinced that Kivan is not ‘fronting’ for any politician in Ukraine and intends to invest more into the Kyiv Post and run it as part of his growing media assets. Zahoor said that Kivan has had legal run-ins with governmental authorities and understands the value of a newspaper where journalists decide what is news.»

«Zahoor detected [in Kivan] ‘a soft corner for Yulia Tymoshenko,’» Kyiv Post reported in the story before Kivan took over. The story was not removed after the ownership change. 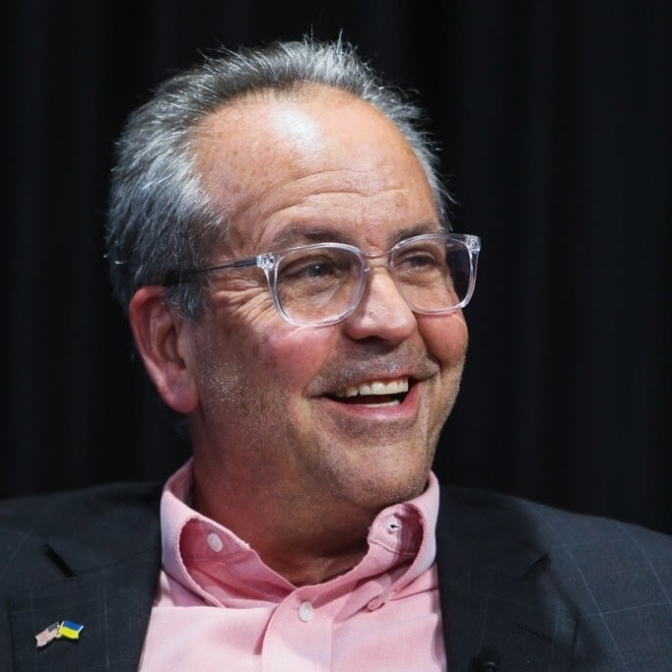 Brian Bonner, from St. Paul, Minnesota, the 15th editorial chief of the Post, had edited the outfit since 2008, except a brief interregnum in 2013, and he continued under Kivan, with a title change from editor-in-chief to chief editor.

According to the Post’s official statement Monday, «Bonner, the Kyiv Post chief editor, said that he will retire after closing down the operations of the newspaper and preserving its archives. Bonner thanked Kivan «for this strong support since he bought the newspaper.»

Bonner’s publicly available personal Facebook posts suggest that perhaps the situation was not as amicable as described: On Tuesday he posted a story from the Kharkiv Human Rights Protection Group: «‘Kyiv Post has been killed’. Journalists cry foul as crucial Ukrainian English-language newspaper abruptly closes.»

Kivan, who often speaks of his family and his Muslim faith, praised the Post’s journalism  in a 16 October 2020 editorial celebrating the paper’s 25th anniversary: «Without independent journalism, you cannot get democracy. Investing in decent media resources is investment with God.»

The ex-staffers in their statement sought to defend their journalism:

«We have exemplified high professional and ethical standards. That is why every president and government in Ukraine’s history attempted to influence the Kyiv Post. However, even under all this pressure, none of our owners went so far as to shut down the paper.»

Published online and with frequent print editions, the Kyiv Post, with the tagline «Ukraine’s Global Voice,» has been the flagship English language news website for Ukraine. Its print editions were also distributed around Lviv. Kyiv Post’s original owner was American Jed Sunden, who published the first edition 18 October 1995.

With 147,000 Facebook followers, Tvoe Misto is primarily online with stories and videos but with occasional Ukrainian and English print editions. Nearly every week, Tvoe Misto hosts in-person single-issue public forums to help the city and its people collectively solve problems.