17:06 31 October 2021
Tweet
305 0
An American exile who worked for those who start wars reflects on a Ukrainian mural of the screaming head of John the Baptist, an image of The Big Lebowski on the uniform of a dead warrior, and twenty years of war since the 9/11 attacks. 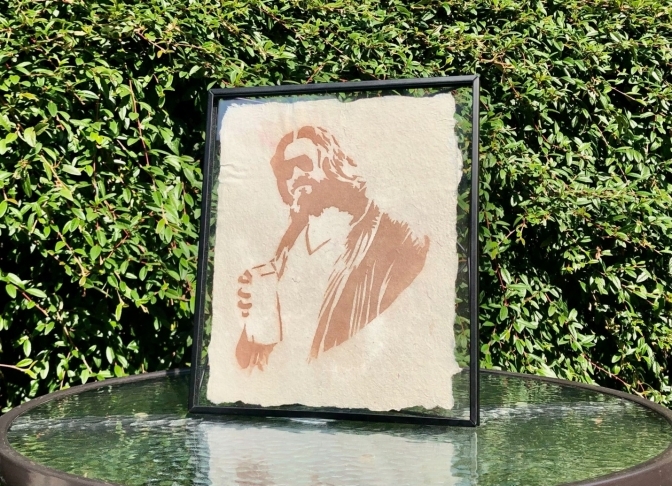 «A passion for extremism, in art and in politics, is a veiled longing for death». – Milan Kundera, «The Unbearable Lightness of Being»

On September 11, Eastern rite Christians, the majority faith in Lviv, mark the Beheading of John the Baptist. The Armenian Cathedral here has an iconic mural of the terrible scene with intense angels holding the anguished screaming head of St. John and the sword that severed it.

Just days before the Taliban moved back into Kabul, I received in the mail an icon of a different sort from that tormented country. A great friend sent me a framed piece of the uniform of his late brother, who had died after serving there and other places while in the U.S. special forces. Days later, the news flooded us with anguished scenes of terrified people as the American project in Afghanistan crumbled.

A program in Montana that helps returning warriors had turned my friend’s brother’s combat uniform into pieces of parchment. On each piece, including the one here on my desk, they imprinted an image of his fictional hero, The Dude, Jeff Bridges’s character from the 1998 film The Big Lebowski.

Looking at this icon, and on the back a photo of the warrior who once wore this uniform, and the image of the martyred St. John, on September 11, 2021, I think of the past decades of American wars. Twenty years ago, starting university I believed in the rightness of the war projects, Afghanistan and Iraq. Upon graduating I went to work for the people who pushed for the wars: first for the Weekly Standard, edited by Bill Kristol. My thesis advisor at Notre Dame refused to advise me because I was going to work for «evil people.» 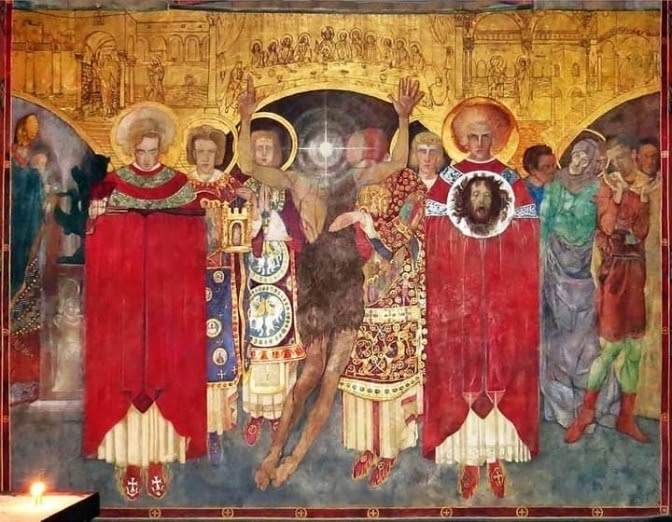 The mural of the Beheading of St. John the Baptist, cousin of Jesus, at the Armenian Cathedral

But they weren’t evil. Kristol was always a kind and gracious mentor who went out of his way, even at risk to himself, to help others, including me when a few years later another mentor, one of the most powerful men in the world, Fox News chairman Roger Ailes, sought to ruin me, because I decided I didn’t want to pay the price required for me to become Ailes’s successor. (The story is partially told in this TV show).

When Ailes selected me as his protégé I was pulled into a paranoid world where we talked about terrorists and Taliban neary every day. Were they hiding in the bushes outside of the estate walls?

Before 9/11, I can’t imagine what Ailes talked about. The idea that we were at constant war gave him reasons to live and allowed all of us always to avoid discussing the personal: the regrets, hopes, and real things that weigh on individual human beings. The wars we believed were sacred and necessary. Afghanistan was like a pagan temple where we sacrificed blood, bodies, and minds to keep our airplanes in the sky, like King Herod sacrificing St. John.

After I escaped from Ailes’s world, I was traveling around trying to understand the America I didn’t know but claimed to be defending. I visited a friend on the California coast–the same friend who later sent me the parchment icon from his brother’s Afghanistan uniform.

My friend had worked at the White House during the early years of the war before realizing he was surrounded by fake people. He joined the military, as did his brother. Trying to make sense of the prior years, we both agreed: We no longer believed in those wars.

«You know the Lumineers?» my friend asked. «They’ve got a song, ‘Charlie Boy.’ Heard of it?»

I liked that band but hadn’t heard of that song.

«There’s a line in it about how much we trust our leaders. In the case of the song, Charlie Boy trusts JFK and goes off to war. We go along with what our leaders make us believe. That was me. That was my brother. That was you. So many of us, swept up in thinking we were following some noble Patriotism, and yet, what I like about this song, is that it is still a credit to the people like Charlie, to my brother: to be such a man, willing to serve, because they loved. The powerful took and used their emotions to their own ends.»

He said with some difficulty that the song always makes him cry and then he played it (click here to listen). It begins with a mother pleading her son not to go to war:

Kennedy made him believe we could do much more»

Love should make you feel good

In uniform, you raised a man

Who volunteered to stand»

My friend played it one more time.

Listening silently, I recalled the zeal of Ailes and so many others–including me–for the wars. Why did we believe it all? We trusted our leaders. And they trusted the people, friends, who influenced them, as I saw up close in my early twenties when I worked behind the veil of power.

Most everyone probably thought they were doing good, but we lived in our own isolated tribes. We had no space for examination and reflection, for conversations like that one I had in California.

For a book I want to publish, I once wrote a speech I wish President George W. Bush had given on 9/11/2001, encouraged us to join the radical enterprise of thinking. Here is part of it:

«Every day the world has terrible tragedies, far away from the cameras and the scene of day’s horrible attacks. And then upon these burdens, today we take this blow, a blow upon the lives of specific souls and, because of its terrifying audacity, upon our national psyche.

«I could lecture our enemies on what you have done, but you don’t care. I could make myself seem powerful, and cover for our intelligence mistakes, by threatening you with the shock and awe of a vengeful nation, but you have no regard for the goodness of life. You are happy to kill yourselves, or at least the impressionable young people whom you mislead. You’re extremists because you’re in despair. What will it do to threaten you?

«In summoning the strength of Americans I do not call for a false unity. We are democratic and we must debate how we respond. Some want to meet bloodshed with bloodshed but before unthinking action let us take these days to think of the last moments of those who died–and decide how we will live.

«How we control and direct our emotions in these next days will determine the course that this nation takes for perhaps the rest of her history. What will that emotion be? Will it involve love, that thing so absent from the hearts of our attackers?

Later today I will go to the Armenian cathedral to see the wild image of the beheading of St. John, a voice in the wilderness, killed by a heartless, fearful, weak king. And now I look at the icon on my desk, that tribute to my friend’s brother.

The favorite notion of The Dude in the Big Lebowski was «to abide.» In its deepest Old English roots, the word means «to wait for» while moving onwards: to live with a kind of trust and peace.

Have we given ourselves the wrong paradigm, the wrong inspiration, the wrong sources to believe? We’ve praised the machine politicians, the revolutionaries, the warlords on horseback. What about the warriors for the poor, the saints, the people who make music and joy, what about the mothers who warn, the soldiers who sacrifice body and mind for the machine politicians and corporate chieftains, and the people, the friends, who try to tell the powerful to cool it?

It’s not easy. I feel this here in Ukraine, a nation partly occupied by and under constant threat from Russia. Just to the North is Belarus, where people who speak their minds are jailed. What do we do?

«News was bad on Upland Ave

And mothers clutched the cross».