Real Voices from Ukraine: ‘Putin is Rattling Nerves of Americans and Europeans, Not Ukrainians.’ Podcast

16:16 21 January 2022
Tweet
835 0
By «swallowing whatever Putin throws at them,’ the West is making the situation worse, says Konstantyn Chyzhyk, a Ukrainian who has worked with some of the country’s key reformers. He speaks in a new podcast with American journalist Joe Lindsley. 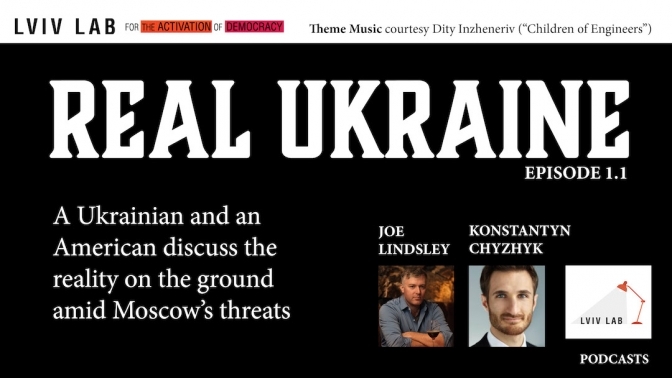 Ukraine is so often in the news these days but so rarely do we hear Ukrainians telling us their stories in English. Here we share the perspectives of thoughtful Ukrainians with the world.

«Because of [the West’s] unreadiness to see the actual threat, they are making it worse themselves by swallowing whatever Putin has been throwing at them,» says Konstantyn Chyzhyk, the former head of office of Ukraine’s President’s Investment Council under the current and previous Ukrainian presidents.

In Real Ukraine, new podcast aimed at sharing Ukrainian voices in English with the world, I interviewed Chyzhyk, a Kyiv resident who has extensive experience in forelign and domestic policy, about the actual situation in Ukraine. A mentee of Natalie Jaresko, the American-born reformist finance minister of Ukraine after the 2014 Revolution, Kostya has worked in several Ukrainian ministries and has visited the USA multiple times including as a guest of the U.S. State Department and of Stanford University.

Listen to the podcast here.

Although global media headlines about Ukraine suggest everything is on the verge of catastrophe, Kostya recalls just how dire the situation was in 2014 in the wake of the Revolution of Dignity. After peacefully protesting for months in the winter in the main square of Kyiv, Ukrainians succeeded in ousting the country’ then-pro-Moscow regime, which fled to Russia. Seizing upon the inchoate situation post-Revolution, Russia’s Vladimir Putin began to invade Ukraine.

He succeeded in occupying Crimea, and in supporting separatists in the eastern Donbas region. But he still had his eyes set on major Ukrainian cities including Odesa, Dnipro, Kharkiv, and maybe even Kyiv. Kostya recalls just how easily these cities could have fallen into Russian hands. 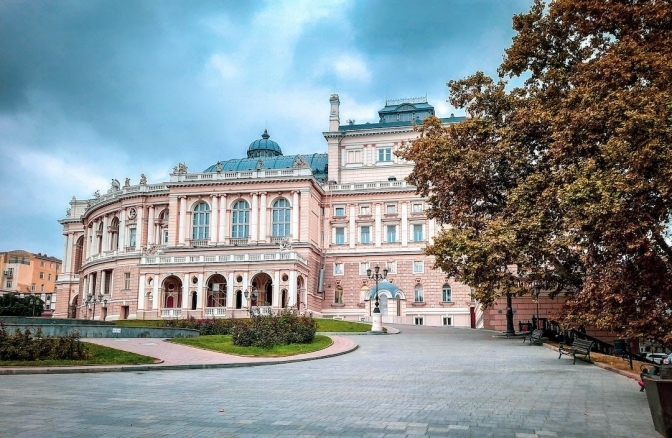 The Opera House in seaside Odesa, Ukraine | Photo by Mary Winchester on Unsplash

«The situation [then] was even more dire,» Kostya says. «Most of our intelligence services, the army, security service, all those institutions in 2014 were infiltrated by Russian agents. So we didn’t even have that much control of our law enforcement and army at that time.»

Russian-speaking Ukrainians in those central and eastern cities, who «according to Russian claims were more pro-Rrussian,» stood their ground with zero resources against one of the strongest armies on the planet.» In other words: a more or less rag-tag band of citizens defended Ukraine.

Today the situation is different: The military is pro-Ukrainian, modernized, and trained by Western allies.

«The people are in much better mental shape and much better suited to fight back whatever aggressive or provocative actions Putin will throw at us.»

Kostya believes that Putin’s build-up of troops along the Ukrainian border is designed to fray the nerves of the West, so that he can have leverage to achieve what he wants, including a pledge that Ukraine will never be part of NATO.

Ukrainians are used to this game, Kostya says, but Putin’s tactics still seem to shock the West.

Maybe they are old tactics. Before World War II, Hitler annexed Austria, saying, well they speak German anyway, Kostya point outs. «When Hitler wanted to annex Austria and Poland… Britain and France said ‘ah well let him have it it will be all right.’»

Read more: «Zelenskiy: They Are Attacking Our Nerves, Not Our Land»

But Kostya says this is not just about Ukraine but about the security of all of Europe. In addition to the Baltic States, Norway, Sweden, and Finland share land or sea borders with Russia and in the past Moscow has tried to aggravate them. And most recently the Poles have faced an incursion of Afghanistan and other Middle Eastern refugees seemingly pushed by Moscow and its friendly government in Belarus.

Meanwhile in Ukraine, despite the increased daily gloom of the headlines, people are more or less calm.

«We’ve been living in a state of war with Russia for almost eight years,» Kostya says. We’ve got almost used it … Most people are ready to do whatever they can to defend their land. … again they are not looking for the opportunity but they are ready to stand their ground.»

Note: Thanks to the Ukrainian band Dity Inzheneriv («Children of Engineers») for the podcast soundtrack, their song, «Prognosis,» containing the words, «Welcome to Ukraine, punk.» You can read about the band’s protest song for the people of Hong Kong here: Ukrainian Punk-Rockers Make a Song for Hong Kong and the Uyghurs.