Scenes from a Galician Christmas: An American finds the heart of ukrainian music

12:04 26 May 2021
Tweet
231 0
From Tukhla to Striy to Yaremche, I visited Ukrainians in their flats and houses, enjoying hospitality and signifcant amounts of samohonka, what we in America call «moonshine.» And every ten minutes it seemed, I witnessed people singing the ancient carols. With every song, I felt we were beating away the darkness creeping in around us–a darness I felt given the events in Washington, DC on that same day. 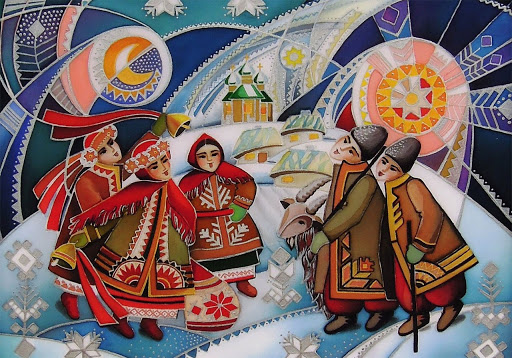 I once drank beer with Guns N Roses frontman Axl Rose, who called me «Joe Rob.» I’ve been side-stage while two American music legends Tom Petty and Dr. John collaborated in New Orleans. In Ireland, I led a tour of 100 Americans traveling around with a Celtic-Ukrainian gypsy folk-punk band. In North Carolina, I was in the presence of country music hero Merle Haggard. In a Tbilisi tavern I have witnessed spontaneous dueling Georgian chant.

These were all amazing events, but now after a year living among the Galicians, I have had my most legendary musical experience: I spent Christmas traveling the Carpathians with musicians singing ancient songs – the sort of thing I had only seen in storybooks. Two weeks later, I still wake up hearing in my head: «Чудо, чудо! – повідають.»

From Tukhla to Striy to Yaremche, I visited Ukrainians in their flats and houses, enjoying hospitality and signifcant amounts of samohonka, what we in America call «moonshine.» And every ten minutes it seemed, I witnessed people singing the ancient carols. With every song, I felt we were beating away the darkness creeping in around us–a darness I felt given the events in Washington, DC on that same day.

Initially, when various friends invited me to Christmas festivities, I was uneasy: As an American, maybe as an introvert, I like to move fast and to be on my own terms. The lengthy holy supper with no alcohol: how would I survive?! And I worried about the feast that came after the fast: days of eating and drinking and the prospect of caroling in the houses of people I don’t know. The hangovers would be terrible! It would upset my routine! And in January no less! The time when we in the West are supposed to be in the gym and in the office resolving not to celebrate but to work, work, work!

But I knew a transformation awaited me: So, on Christmas Day, wearing the veschyvanka I had purchased for Independence Day and a Hutsul hat from Lviv friends, I took the train to Slavske.

My friends from Striy came to get me – because I had gone to the wrong city – and we began the adventure at a nearby village, a farmhouse where friends lived. During the first round of samohonka, I thought: I must limit how much samohonka I drink. Then I looked around the table: Everyone was singing, no one was worried about anything, and so I decided to embrace Ukranian Christmas – however long it lasted and wherever it took me. I took the shot and grabbed the bowl of borezschksy – that improving combination of beet-root and horseradish, that stomach-saving mixture – yes, that would keep my head level!

That night, in Striy, we had dinner no. 2 at the home of a friend whom I met through the LV Café jazz club, and his family – all musicians. Every few minutes, they broke out into song, with Taras on accordion, Roman on violin, Andrew on flute, Natalyia singing and ringing the bells. Others showed up to join us, including a girl with an amazing voice: such a concentration of talented people!

Around 11pm, I thought things were wrapping up. My hosts discussed some things in Ukranian. I figured I understood. Yes, time to rest. Suddenly everyone was putting on their coats and shoes.

No, we were not ending the night. We bundled up and soon we were at another house, where until maybe 4 in the morning we repilicated the same feast we had just enjoyed, Dinner No. 3 now, except with a different type of mushrooms, in the home of a famed vocal coach and pianist.

Sometimes, neighbors came by to sing. When one group of carolers saw all the instruments within the room, they hesitated, unsure whether they should play for such professional musicians. Nonsense, said our hosts, and all joined in together, every one singing except me. My friends had given me a small 100-year old bell, and like a litlte kid I was focusing on ringing it in the right rhythym.

Then, the man of the house, the famed pianist, took to the piano and began the familiar song, «Silent Night.» We sang in English. And then back to the Ukrianian carols. I began to see how ritual, which we lack in the USA, makes holidays an occassion to draw upon the well of something sacred, find new energy.

Over the next days, my Striy friends brought me to many houses and apartments. Sometimes, we would stop briefly, sing a song or two, and then hurry to the next stop. Other times, we lingered and feasted awhile. I met a few Americans of Ukrainian heritage who were just as surpised to find this exiled Irish American deep in the heart of Galician Christmas.

All this culiminated for me in a day of images and sounds so unusual as to be psychadelic. I call it now the day of the green room and the red room. It is the most Ukrakianian day I have spent in this country.

In the morning in Striy, we visited my friend’s grandmother’s home. Everything was green: the cabinets in the kitchen, the rugs upon the floors, the carpets upon the walls, ever the cups and plates. We sang Небо й земля, etc.,and she recited the gospel words afterward. Surrounded by green, a moment of joy and happiness.

Then after many hours in the car, we reached Yaremche in the mountains. There we met a great Hutsul violinist, who showed us around the river and the town. Afterward with pizza and wine, we went to his cottage, where he repairs violins in a red room. The rugs upon the floor were red, the carpets upon the walls were red.

And there my friends and the legendary Hutsul music made music: коляда, Edith Piaf, folk songs, opera, everything–and the little red room became a grand music hall, an infinite place of possibility.

Back at my friends’ apartment in the wee hours that night, while we drank fresh pine needle tea and listened to some jazz on YouTube, I thought two questions: not only where am I, but also when am I?

In the spring lockdown, friends in America told, «get out of Ukraine, you’re gonna die,» because they had only heard bad things about Ukraine in the U.S. media. An article in National Interest in the U.S. said that that the pandemic would devastate Ukraine more than most countries because it «is the poorest country in Europe.» Yes, according to important financial standards there is poverty here but the richnesses I saw during Christmas amid the Galicians: that’s something that makes life truly noble as we spin around on this pale blue dot in the vast bleakness of the universe.

I appreciate those conscientious Ukrainians working to keep alive their ancient language traditions, whether it’s Chef Kloptenko telling the New York Times that borscht is, indeed, Ukrainian; a friend’s religious aunt who ensured everyone had the right lyrics at the holy supper; or my musical friends in Striy, some of them not religious, passiontely keeping up the tradition of singing the songs of Christmas.

We just keep singing against the darkness til we forget the darkness: a powerful thing to carry an idnividual into the new year, something made possible by people who keep alive their culture as a bright spot in the universe.