19:57 19 April 2022
Tweet
328 0
He says that despite knowing of the civillians who hide on the territory of «Azovstal» factory, the occupiers use free fall bombs, rockets, bunker-buster bombs, all varieties of artillery, both ground and naval for indiscriminate attacks. 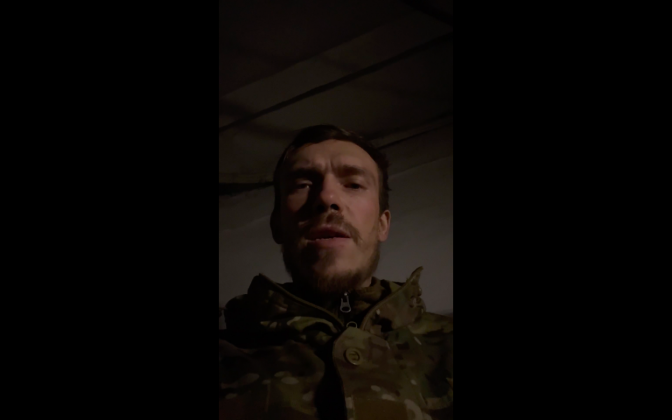 screenshot from the video

Denis Prokpenko, the commander of «Azov» regiment, recorded a video in which he calls the world leaders to help organize the urgent «green corridors» to evacuate civillians, wounded and dead soldiers. This was reported on the Telegram channel of «Azov».

He reported that hundreds of civilians are currently sheltering in the «Azovstal» factory from «russian world». Among them are people of all ages, women, children, and families of Mariupol defenders.

«They found their only available shelter next to the Ukrainian soldiers, who are still defending the city from russian invaders. Russian occupational forces, and their proxy from «lnr/dnr» know that, they know about civilians, and they keep their fire on the factory willingly. They use free fall bombs, rockets, bunker-buster bombs, all varieties of artillery, both ground and naval for indiscriminate attacks.» – he said.

Read also: «There was a fog, with a somewhat sweet taste.» Mariupol defenders recorded a video after the chemical attack

«City theatre, maternity hospital, schools, kindergartens, hospitals, houses were destroyed by those who now offers civilians evacuation and safety. These are the same people. And nobody believes these bastards. Therefore I urge the politicians of all civilized world to organize a proper «green corridor», ensure its safety and provide immediate evacuation and protection of civilians, wounded soldiers, and bodies of dead soldiers, to bury them with honours.» – the commander of «Azov» added.

«Azov» also recorded a video from the shelter where civillians are now hiding. It shows children that are trying to distract from the harsh reality.

«We are trying not to be nervous. When they are shelling, everything shakes here,» – a boy of primary school age in a grey jacket said.

Whole families are hiding in that place. A mother of three children says that she notices how their teeth are decaying because of the lack of vitamin «D» and the sun, but is also concerned about their mental state.

«The conditions are not brilliant for children. No education, no development, nutrition…» – she stated.

A teenage girl in a waistcoat said that this was her second bunker after the first one was destroyed by a projectile. She says it was more hope in the food supplies at the beginning, but later uncertainty came.

«Initially, there was much of everything. We were told that there is a year reserve, then they said that it’s only for a month. Now, we don’t know.» – she said.