«The Courage to Fail and Keep Searching»: Ukrainian jazz musician on the challenges of the creative life

18:15 18 December 2021
Tweet
924 0
Yakiv Tsvietinskyi, acclaimed trumpeter and composer, fresh from prestigious yearlong international fellowship, shares his vision, struggles, and inspiration: «You can’t play New York jazz living in Dnipro. The atmosphere of the city will appear in the sound no matter how you try to avoid it.» 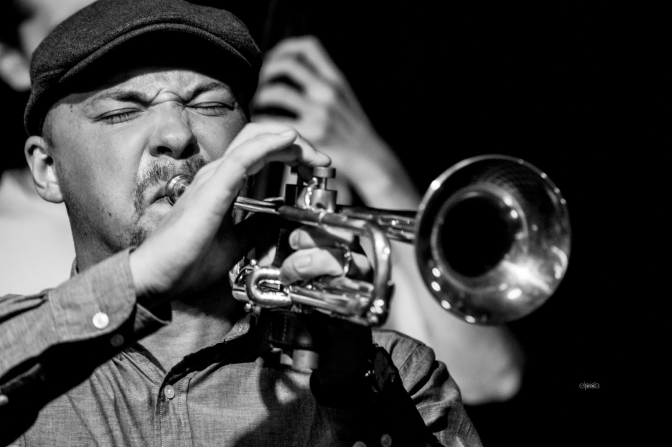 «The high price of inspiration

But I keep coming back for more,

Still I take no caution.

«Inspiration with some wings

Is what I’m looking for.

Inspiration with no strings

– «The High Price of Inspiration,» by Guy Clark, American singer-songwriter

I set out to write this story about Ukrainian jazz trumpet player and composer Yakiv Tsvietinskyi, and then I hit a wall. As a journalist, I can always write some kind of scientific analysis of the lives of others but if I did so in this case, without acknowledging my own creative struggle – the barriers between idea and reality–the story would be fake: Because Yakiv, more than most, speaks with candor about the challenges of making art, in his case, jazz music.

A native of Dnipro on the eponymous river in central Ukraine, Yakiv is on a mission to create new Ukrainian jazz that is more than «just putting jazz chords in Ukrainian folk songs.» He’s in a great position to make such innovative music, having just returned from the prestigious Focusyear jazz program in Basel, Switzerland: a yearlong, expenses-paid fellowship of nine of the world’s best young jazz musicians under the mentorship of jazz legends.

Such a program is a luxurious experience, a dream for any musician, but it has perhaps by design opened up new challenges and realizations for Yakiv that sometimes create a creative paralysis: He began to see new possibilities with his art, but he would rather, it seems, do nothing rather than be fake.

«Now I see all the weak spots and all the bullshit I play and now I try to fight it and it is really hard,» he told me, in a conversation at the LV Café jazz club, where he is a regular player and where, in between sets, conversations about the creative life are a common occurrence.

What does he mean by «bullshit»?

In Basel, considered one of the world’s most liveable cities, he would alternate between intense weeks of creative success and hard work and weeks of darkness:

«I had some weeks when i was practicing like a motherf*******r, writing and playing, playing sessions with great musicians but there were some weeks where I laid on the couch for a week watching Netflix, being extremely destructive and drinking a bit too much. it was really hard to find that balance.»

«The paradox, the problem, is when you’re in that position, being there in Basel having everything you dreamed about you have no reasons, not a single one, to complain about your struggles because all the young musicians would be jealous of what you have and what you know, then you think about all your problems, your level, your worth, what you really want to do.»

«I feel that the bar is really high now,» he says. «The quality of my career is improving, but the cons are you become really self-conscious. You felt that you want to repeat yourself a lot, because you have some patterns in writing and playing.»

Now, back home in Ukraine, he’s set himself a mission: He wants to create new Ukrainian art that is Ukrainian because he is Ukrainian, growing from but not beholden to anything in the past. He works to «decompose»: to split the old folk melodies to separate elements–»form, melodic contours, rhythmic figures»–and using those elements as the building material to make something new. And he hopes other Ukrainian musicians will take a similar approach.

«We need to build up some confidence and courage to build up something that is new, that is fresh.... it means to be aware of surroundings, of your mood, of your thoughts,of your physical conditions, and reflecting everything through your playing.»

Yakiv on the keys at the LV Café

Yakiv wants «to open the doors for Ukrainian musicians. We suffer from lack of travel and proper exposure on the European jazz market.

«When I spoke to musicians in Europe, they don’t know anyone in Ukraine except for people who moved out.... We [Ukranians] always think we still have to reach another level before we present it. Yeah we are working on stuff, maybe in a few years we will be ready to travel and stuff, but i think it needs to happen now.»

«Ukrainian music already exists,» he said. «That’s a fact. It’s already something that belongs to us. We just need to embrace it. We need to look inside to our identity instead of trying to find something to grasp on. We are already ourselves.»

This echoes the ideas of Ukrainian musician Sasha Boole, who in a recent conversation explained to me how he quite radically plays American-style Delta blues and folk, but in a Ukrainian way.

«If you love British rock and you live in Ukraine it’s not like you’re neglecting your heritage,» Yakiv said. «You are just doing what you love and you will do it in your own way because the art and music is sort of a projection of our surroundings. You can’t play New York jazz living in Dnipro. The atmosphere of the city will appear in the sound no matter how you try to avoid it.»

Folk music, Yakiv said, «comes from the experience of people. I think that is the biggest honesty we have to have in music.»

In the new compositions he is working on, Yakiv is taking inspiration from the genre of duma, Ukrainian heroic epic that is «from first person perspective, a tale of a traveling person that witnesses stuff and sort of reflects on it.»

Witnessing Ukraine to the world

Yakiv led his fellow Focusyear musicians, who had also traveled together to Catalonia, in Spain, on a trip to Ukraine, to Kyiv and Dnipro.

A Ukrainian avant-garde project in which Yakiv is involved

«Everyone loved Ukraine so much,» he said. «One of the biggest surprises for my bandmates was the fact that Ukrainian musicians can play jazz really nice. There were some really killer players. They didn’t expect that. For them Eastern Europe is something mystical and rural.»

The 2021-22 crop of Focusyears scholar includes a Ukrainian once again, also a trumpeter, so the chances continue for Ukraine’s musical image to shine.

Making the Switch from Russian to Ukrainian

Yakiv grew up in a village near Dnipro, where he studied classical piano and met a trombone-playing piano teacher when he was 11. That teacher encouraged him to attend the music academy in Dnipro, a city of nearly one million. There, with the help of a classical trombone professor, he taught himself trumpet because there was no such teacher.

He was self-educated because «everyone was in this informational isolation. There were many Soviet books that circulated around. most of that was complete nonsense...from a modern perspective. «

As a child of a Russian mother and a Ukrainian father, he spoke both Russian and Ukrainian. In the village, Ukrainian language was the norm but when he went to big-city Dnipro all the teachers spoke Russian, which caused him to switch to that language for awhile. But–

«Quite recently I finally switched back to Ukrainian thanks to my wife [Marianna Tsvetinska, a soprano with the Lviv National Opera] and her support and my family. My mother [from the Ural mountain region of Russia] now speaks Ukrainian exclusively....

«As soon as the war started [when Russia first invaded in 2014] my mother switched to Ukrainian.»

Vladimir Putin, the Russian leader, had suggested that Crimea and other parts of Ukraine should be part of Russia because the people spoke Russian.

Yakiv’s mother «said if that’s the reason for invasion of a neighboring country, the language, she said she will do her best to remove this reason, eliminate it, so she switched to Ukrainian completely.»

A St. Nicholas Day Gig. And Finding the Courage to Fail

You can see details about the show here.

«I really want to write something new, something cool,» Yakiv told me.

«At the same time that means that if you will experiment that most of those ideas will fail, that is why you need that courage, to fail and to keep searching.»

And in sharing Yakiv’s story, I’ve learned more about how to overcome my own creative barriers, of which maybe the publishing of this story is a sign.

Read more: «True art will take over the city very soon, something extraordinary and fresh.» Yakiv told me previously for this story about the LV Café jazz club: «The Music of Free People in Lviv.»