Remembrance Day of Holodomor, Moscow-created genocide of Ukrainians 90 years ago. Facts and meanings 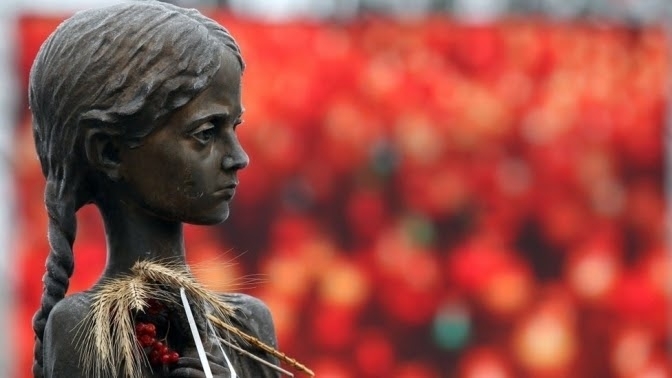 The fourth Saturday in November is Holodomor Remembrance Day in Ukraine recalling a brutal act of genocide against Ukrainians, a term originally coined by a Lviv Jewish scholar. Traditionally, on this day, citizens attend a memorial service and lay symbolic pots of grain and candles at the monuments to victims of the Holodomor, meaning «to kill by starvation,» in Ukraine. At 16:00 they light candles around the city and honor the memory of the victims with a minute of silence.

If you visit the monument on Svoboda (Freedom) Avenue in Lviv, devoted to famed Ukrainian writer Taras Shevchenko, you will see two features: The statue itself of Shevchenko and the symbolic «Wave of National Revival», which depicts the history of Ukraine. If you have a look at the back of the wave on which Shevchenko seems to ride, you will see exhausted bodies of already dead and dying people and a woman with a boy watching the death. It is this picture that reminds us of the tragedy of the 20th century – the Holodomor of 1932-33.

In the 20th century, Ukrainians survived three famines: 1921-1923, 1932-1933, and 1946-1947. The famine of 1932-1933, however, was the worst, when the communist Soviet authorities, headed by Joseph Stalin, purposefully deprived Ukrainian villagers of any provision during a time of drought and poor crops. These actions were presented as emergency «grain procurements,» though the Soviets took away any food they could find in the people’s homes, and hiding even a portion of grain was considered «looting of state property» (introduced by the Law of Spikelets).

The leadership of the Soviet Union concealed the death of Ukrainians from artificial starvation. Only after Ukraine declared independence in 1991 did an investigation into the Holodomor begin and it now has been recognized as genocide at the legislative level and in court. Currently, Ukraine and 23 other countries have proclaimed the Holodomor a genocide against Ukrainian people (Germany may be the next to acknowledge this as an act of genocide soon, on November 30).

According to historians, during 1932−1933, millions of innocent people fell victim to the famine in Ukraine caused by the administrative measures of the Soviet government. Below, there are the most important facts about Ukraine’s biggest tragedy:

1. The Holodomor in Ukraine lasted 17 months – from April 1932 to November 1933. According to various estimates, between 4 and 7 million people died, although some historians indicate 10-11 million dead.

3. In the documents of the Politburo of the Central Committee of the Communist Party of Ukraine, there is evidence of how in the autumn of 1932, the so-called «green echelons» were organized from Ukraine to provide industrial centers of Russia with food for the October holidays. Sowing material was exported from starving Ukraine, and also even pickles, cabbage and tomatoes, leaving people doomed to starvation.

4. According to Soviet government orders, any trade in rural areas was banned and food supplies to villages were suspended. Any use of bread as wages to the workers was prosecuted and punished for 10 years in prison and execution in areas that did not comply with grain procurement plans, provision was being confiscated as fine. The share of Ukrainian grain in the all-Union volume of grain procurement reached more than a third, and in some regions exceeded the targets for the North Caucasus, Central-Black Earth region, Kazakhstan and the Moscow region combined.

5. The former Kharkiv and Kyiv oblasts (now Poltava, Sumy, Kharkiv, Cherkasy, Kyiv, Zhytomyr) suffered the most from the famine. They account for 52.8% of deaths. The mortality rate here exceeded the average level by 8-9 or more times.

Two alumni of the Lviv Law School, extraordinary personalities who held leading positions in various United Nations bodies and became the founders of the basic postulates of international law and the concept of human rights – Raphael Lemkin and Hersch Lauterpacht.

Raphael (Rafael) Lemkin – scientist, Holodomor researcher, was the first in the world to introduce the term «genocide» – for actions against a group of people united by a common trait. He was the first international law expert to call the crimes of the Stalinist communist regime against Ukrainians genocide and analyze it in the context of an international convention.

Sir Hersh Lauterpacht – a prominent international lawyer who played a major role in the preparation of the Nuremberg Trials and became the author of the definition «crime against humanity» – that is, the systematic destruction of a large group of people.

You can read more about Lemkin and Lauterpacht in the book «East West Street: On the Origins of ‘Genocide’ and ‘Crimes Against Humanity,’ by Philippe Sands, a grandchild of a Leopolitan.