Thursday 12 May 2022: Ukraine Situation Summary: Ukraine’s application for EU membership will be discussed in June, Finland and NATO, choice for russia 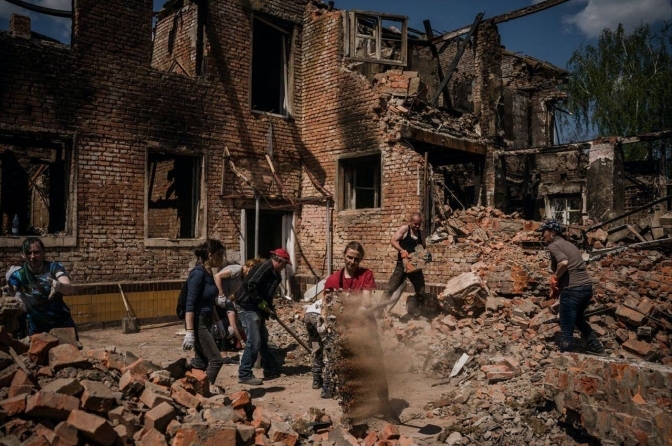 Recovery after the Russian attacks

UKRAINE: During the war, the occupiers destroyed 101 Ukrainian hospitals

Zelensky is still waiting for the visit of Steinmeier and Scholz

If Ukraine was admitted to the EU, the war would stop the same day – Adviser to the Head of the Office of the President of Ukraine Arestovych

WORLD: «Even if he repents»: Johnson said it was impossible to normalize relations between the world community and Putin

Peskov: «Finland’s accession to NATO is a threat to Russia»

Ukraine’s application for EU membership will be discussed in June, – the French Foreign Ministry

The adviser to the head of the President’s Office is convinced that Ukraine will dictate the conditions during the peace talks.

Russia now has a choice – a peace treaty or military defeat. That is why the Kremlin appoints commanders who soberly assess and report on the situation.

This was stated by the adviser to the head of the President’s Office Oleksiy Arestovych in a conversation with Russian journalist and human rights activist Mark Feigin.

«Desperate trade with the world community and Ukraine for a peace treaty is beginning. Because they understood: either a peace treaty or a military defeat. There are no other options,» Arestovych said.

The adviser to the head of the President’s Office is convinced that Ukraine will dictate the conditions, and «the more Western aid comes, the louder we will speak.»

«The problem is different: we are not in favor of negotiations now and the Russian side accuses us of this. They say that Ukraine does not want to agree at all,» he said.

According to Arestovych, President Volodymyr Zelensky does not believe in peace talks with Russia. The head of the President’s Office also emphasizes that the main task is to liberate the entire territory of Ukraine.

Active hostilities continue along the entire front line. Ukrainian fighters repulsed attempts by the occupiers to break through in the area of ​​the Toretsk territorial community.

Yesterday there were shelling by cluster shells of a phenolic plant in New York (Toretsk community) – two people were injured. In the morning there was a shelling of Svitlodarsk – hit in a high-rise building, information about the victims is currently missing.

At night and in the morning the occupiers fired artillery shells at Avdiivka and the Ocheretyn community. As a result, private houses were damaged and set on fire.

26 artillery shells of all territory of the area. The Russians are trying to take complete control of Rubizhne, block the Lysychansk-Bakhmut route and take Severodonetsk – there were 9 shellings a day. Fighting continues in Bilohorovka. During the day, 24 residential buildings were damaged.

The night passed with anxiety. In the morning, the occupiers fired on the Zelenodolsk community. Hit two settlements. As a result, one person died and another was injured.

At night, Russian troops fired rockets twice at the city of Novgorod-Siverskyi. Aimed at the local boarding school and private homes. Rescuers are working on the spot. It is known in advance about the dead and wounded.

There was a shelling of the village of Novovasylivka, Shevchenkivska community, as a result of which a residential building caught fire. In the evening, there were shellings in the Bereznehuvatsky community – houses were partially damaged and one woman was injured.

In Mykolayiv the territory of the Balabanovskyi forest came under attack. Also in the morning there was a report of shelling in the Ship district of the city – no casualties, damaged household gas pipeline.

In the evening, part of the infrastructure building in the Karlovy Vary community was damaged by a rocket attack from the occupiers’ plane on the territory of Poltava district. There are no victims, there was no fire.

There were explosions. In particular, the villages of Kalynivska and Velykooleksandrivska communities were shelled from Gradiv, and houses were damaged.

Due to shelling and explosions in the region, forest fires continue. According to preliminary information, the area of ​​fires is about 8 hundred hectares.

No shelling was recorded in Kharkiv during the night. In the region, the occupiers carried out an air raid on the village of Novy Merchyk, Bohodukhiv district.

As a result, one person received serious injuries and burns. There is a victim of the shelling of Lozova district. All attempts by the Russians to attack the Izyum direction were unsuccessful.