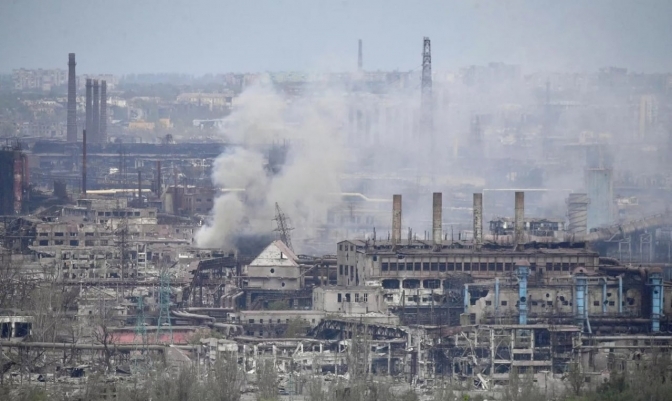 UKRAINE: There are 12-14 thousand inhabitants left in Izyum, Kharkiv region: it is impossible to bring medicines and products to the city

In Izyum, the bodies of 44 people who died in March were retrieved from the rubble, the head of the Kharkiv Regional Military Administration Sinegubov said.

The Russians export stolen grain and vegetables from the temporarily occupied territories of Ukraine to Russia and the previously-annexed Crimea.

There are more than a thousand servicemen on Azovstal, many of them wounded – said Deputy Prime Minister Iryna Vereshchuk.

WORLD: Macron of France and Orban of Hungary will discuss an embargo on Russian oil

«We all want this»: the Bundestag called for Ukraine’s accelerated accession to the EU

On May 9, Russians and participants in the Victory Day rally in Berlin attacked the Ukrainian TSN film crew, which was filming a story about violations during commemorative events.

Hungary will assure that it is not against Ukraine’s accession to the European Union. Budapest has been an ally of Putin and has refused to go along with the EU’s proposed embargo so far.

On the day Russia celebrates Victory Day, US President Joe Biden signed a law on a lend lease for Ukraine, which includes increasing arms supplies and speeding up the supply of weapons to Ukraine.

The full title of the bill is The Ukraine Democracy Defense Lend-Lease Act of 2022.

The Lend-Lease Program is an aid provided by the United States to allies of the anti-Hitler coalition between 1941 and 1945. The United States then provided about $ 60 billion in aid to European countries. At current prices, this amount is $ 700 billion.

According to many experts, the introduction of a land lease program could greatly simplify the bureaucratic red tape in providing US assistance to Ukraine, as is currently the case. After all, now any process of arms supply goes through various American officials, which significantly slows down the whole process. According to experts, the lease is also useful for the United States itself, as this program will have a positive impact on the US economy and raise the rating of US President Joe Biden.

On April 28, the US House of Representatives approved a law on lend leases for Ukraine. As the senators explained this decision, they supported the proposal, as Ukrainian defenders proved that they can fight off Russian troops and show real heroism in the fight against the enemy. 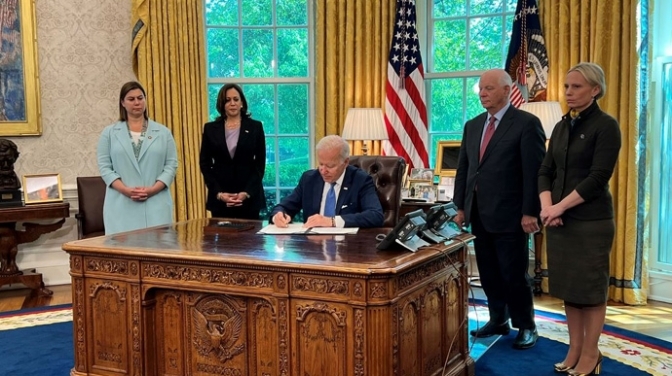 Biden signed a law on land lease for Ukraine

Heavy fighting near Lyman, in the area of ​​Marinka and Novomykhailivka. Significant destruction of civilian infrastructure in Maryinka. Damage cannot be documented due to constant shelling. In Avdiivka: in the evening and this morning – artillery shelling, direct hits on high-rise buildings. Two air strikes at night. Now the shelling continues.

The shelling of Toretsk, the villages of Zalizne and the village of New-York (so named in the 19th century) does not stop. One of the few historical monuments burned down in New-York yesterday – Peter Dick’s steam mill. The monument survived two world wars.

In Mariupol, the occupiers held a rally on May 9, unfolding a 300-meter celebratory ribbon. The military is being held in Azovstal.

The epicenter of the fighting has moved to the area of ​​Bilohorivka (between Popasna and Lysychansk), shelling of Severodonetsk and Lysychansk continues. Arrival at Lysychansk refinery – ignition of the installation of elemental sulfur and low gas pipeline gas station, fire area 360 sq.m. Detailed information on the consequences and victims is being clarified.

A night of constant anxiety. In the morning the Zelenodolsk community was shelled again with artillery. Several houses in the settlement of this community were affected. There are no victims as of now. Detailed information on the consequences of the shelling is being clarified.

Pervomaiske village was shelled all night. An 81-year-old resident died as a result of the shelling, there was a fire and most garages were on fire. At about 10 pm, the area of ​​the village of Bilozirka was shelled. Pervomaisk was fired all night. Quiet in the morning. Approximately till the third morning attacks of the village of Lymany Halytsinovska community of the Mykolayiv area proceeded. Three houses were destroyed, no one was injured.

In the evening, rockets were fired at the city of Odesa. The shopping center and the warehouse of finished consumer goods were destroyed. One person was killed, five were taken to hospital and treated. Detailed information on other injuries and possible victims is being clarified.

The occupiers organized a celebration on May 9. The mass was made up of the occupiers themselves and actors from the Crimea and the DPR. During the day and night in the Kherson region a number of explosions were heard. The hottest situation is in the settlements bordering the neighboring regions. Dozens of villages and settlements remain in the region, which have been without electricity and water since the first days of the war.

The night was relatively calm, during the day – one victim of shelling in the Slobidskyi district of the city. The occupiers fired on Kharkiv and Balakliia districts – four wounded. Three people died in Tsirkuni, two women exploded on a stretcher. Raisins – the fighting continues.