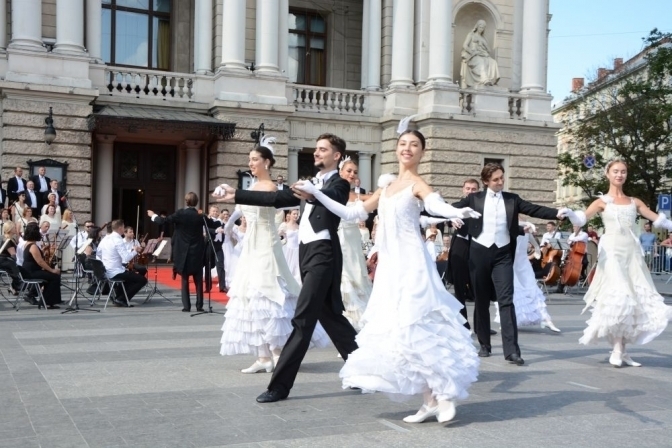 Lviv National Opera is organizing a grand open-air occasion for the residents and visitors of the city, devoted to the celebration of Ukrainian Independence. It will take place on the square in front of the Opera House on August 23, a day before the holiday.

«By the 30th anniversary of Ukrainian Independence, on August 23, on the square in front of the Lviv Opera House, you’ll witness a large-scale musical and theatrical performance», – is stated on the institution’s Facebook page.

In particular, there will be more than 200 performers, choirs, gymnasts, a bandura choir, an orchestra, a ballet, a street theatre and a fire show.

The organizers aim to present the history of independent Ukraine through the prism of two impressive works: fragments from the cantata «Carmina Burana» by Carl Orff and the extravaganza «When the Fern Blooms» by a prominent Ukrainian composer Yevhen Stankovych.

Additionally, in between, there will be a street performance «Dreams by Kobzar» – a look at the desired independent Ukraine through the worldview of the most famous Ukrainian poet Taras Shevchenko.

Admission to the event is free, but the visitors must obtain special invitations at the theatre’s box office on the day of the event. The action starts at 20.30.

Throughout the whole week before the Independence Day (August 18-24) and a week after (August 26-29), many more official celebrations will take place in Lviv at various locations:

«First thirty». Short movies of independence from NGO «Wiz-Art» – it’s a film festival of works 1991-2021, consisting of four special programs and two lectures about Ukrainian short movies that changed during the years of Independence.

X anniversary folklore festival «Etnovyr» – on August 20, a Forum of folklore initiatives will take place with the participation of the president of CIOFF Philip Bosan. The next day, August 21, it will be followed by the performance of a famous Choir of Veryovka with orchestra and dance group

stuff, new masterclasses, and a party from the Night Ambassadors.

Festival «Night in Lviv» – an exclusive festival during which museums and theatres in Lviv live a nightlife and reveal their secrets. 21.08 at 19.00 – the opening of the festival on Rynok Square and a bright show from the Lviv Academic Spiritual Theater «Voskresinnia» (Resurrection). The program includes night tours of museums, theatrical and artistic performances.

Flea market «Tlum i Kram» – a fair of the shirts with authentic ornaments, old postcards and books, vintage treasures and priceless memories.

Organ in the midnight – a unique concert by soloist organ player Svitlana Pozdnysheva, which

will begin at 23.00 and end precisely at midnight. In the mystical time when a new day is born, the most powerful musical instrument in Ukraine will sound.

The square on the crossroad of Konovaltsia and Yaponska streets

A celebration of the day of Yevhena Konovaltsia street, named after a famous military commander of the Ukrainian People’s Republic. There you can find master classes, drawing for children; youth quest «Along the paths of Eugene Konovalets»; a concert of the acoustic group «Lemko Bluegrass Band».

Raising the Ukrainian flag and presenting the project «Music in the open air» – the event will include a mass prayer and the concert of the brass orchestra of the Lviv National Philarmonic (35 musicians).

A creative meeting with the folk song ensemble «Oksamyt» from the city of Zaporizhzhia – the program includes folk and original songs, folk ceremony, traditional dances.

Prospekt Svobody, 28, start and finish near the Opera House

«March of the unconquered» – walking march, followed by raising the national flag and a common prayer

Square near the monument of Taras Shevchenko (city centre)

Square near the Lviv Opera House

Concert by military orchestra of National Academy of Land Forces

Square near the lake on Symonenka, 10 street

Square near the National Academy of Land Forces (Stryiska street)

Different Locations in the city

Riasne residential district, a yard of the school №92

RiasneFEST – an annual festival in the district of Riasne. The program includes masterclasses, quizzes, sports competitions and a concert.