Under the virgin’s protection: the church with a unique boat-shaped pulpit

18:48 15 October 2021
Tweet
427 0
The Cathedral of the Blessed Virgin Mary’s Intercession on Hrushevskoho Street, features miraculous icons of the Mother of God, a unique ambo (pulpit in the church), as well as an altar made of black marble and clear alabaster, dating from 1595. 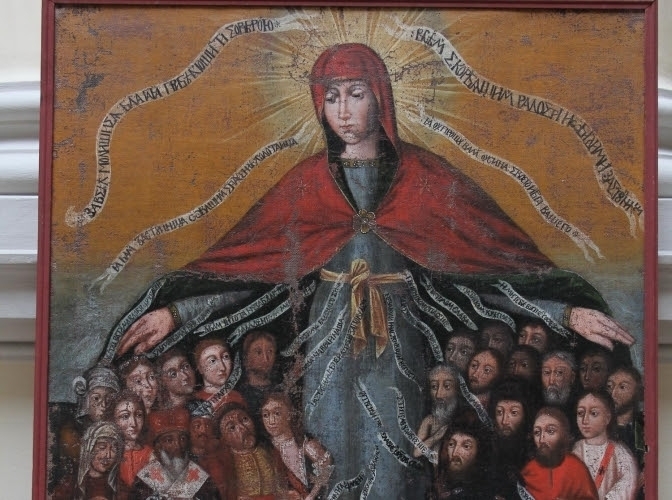 Photo: Protection of the Blessed Virgin in the version «The Joy of all sorrows», Second half of the XVII century,village of Stara Sil, Staryi Sambir district. Source: Espresso

On 14 October Ukraine celebrated the great Christian holiday of the Blessed Virgin’s Intercession, also called Theotokos or, in Ukrainian, Pokrova as well as the Day of the Defenders and Defendresses of Ukraine. Lviv guide Oleksandra Diabina tells about the wonderful Lviv church with a mysterious history, which celebrates its holiday on this day.

Read about the history and traditions of the holiday: Ukraine celebrates the Blessed Virgin Mary’s protection – and its defenders and defendresses

In Lviv, there is the Cathedral of the Intercession of the Blessed Virgin, the construction of which began in the XVII century and was initiated by monks – Trinitarians, whose main purpose was to find and redeem prisoners from Busurman captivity. On Hrushevskoho Street, 2 we have an incredible church, and now the Cathedral of the Lviv-Sokal Eparchy of the Orthodox Church of Ukraine.

The first Trinitarian monks came here from Spain in 1685. Gradually, they bought several houses in the centre of Lviv, where they built a temporary monastery. In 1694, the local nobleman Mykola Strzalkowski gave them 40,000 zlotys (the currency of the Polish Commonwealth, to which Lviv belonged until 1772 when it became a part of the Austrian empire) for the monastery, a plot of land in the Galician suburbs, and funds for construction.

In the same year, a wooden monastery, and two years later, a wooden church of St. Nicholas were built. In 1739-1745, a modern building was built at the expense of Samuel Mukhavetsky and Jan Jablonowski. F. Placidi is considered to be the architect, and the Trinitarian monk Kazimir Gronadsky from Lublin is considered to be the builder. In 1769 there was a fire. The reconstruction of the church lasted until 1777, and in the same year, the church of St. Nicholas was consecrated. Abruptly, the Order of the Trinitarians was abolished by the new Austrian government five years later. Nine chaplains and three brothers were forced to leave the building. The temple had a nine-voice organ, ten altars and the main altar facing west.

In 1790 the church became a parish. In 1837 the church was placed under the care of the Jesuits. In 1853, next to the church in the house of the Jesuit convent, the University of Lviv was established. In 1903, Lviv architect Mykhailo Luzhetskyi completed the restoration of the building. In 1924-1926 the cells were partially rebuilt according to the project of architect Tadeusz Vrubel. In 1990, the church was renamed the Cathedral of the Intercession of the Blessed Virgin.

Among the curiosities of the temple is the pulpit-ambo of incredible appearance in the form of the Apostle Peter’s boat. A seine hangs from the boat, supported by the Apostles Peter and Paul.

In the side nave in the chapel of St. Florian, there is an altar of black marble and clear alabaster, which dates back to 1595 and is considered a very valuable monument. The theme «Passions», illustrated on it, and the altar was moved here from the Latin Cathedral’s chapel of the Holy Cross, founded by Jan Scholz-Wolfovich – a mayor of Lviv, who had 24 children.

Thus, the Church of St. Nicholas, from St. Nicholas Street (former name), turned into the Cathedral of the Intercession of the Blessed Virgin on Hrushevskoho Street.

Lviv is rich in temples and cathedrals, everyone will find their own, and the Blessed Virgin will always find us to take us under her protection.

The author’s column is a reflection of the author’s subjective position. The editorial board of «Your City» does not always share the opinions expressed in the columns, and is ready to give dissenters the opportunity for a reasoned answer.