We only made the last jerk. Ihor Yukhnovskyi on proclaiming the Independence 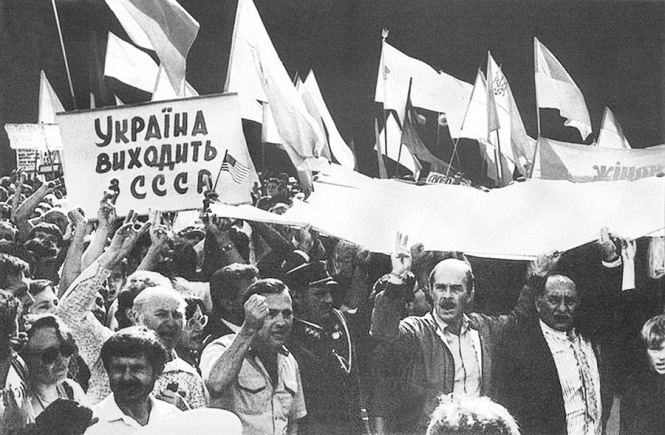 On the eve of Independence Day, Tvoemisto.tv conducted a survey among readers, asking what was crucial, in their opinion, without which there would be no independent Ukraine. Almost everyone noted in the answers that an independent Ukraine wouldn’t exist without our strong conscious people – those romantics who fought for it at different times. And also without language. Based on these answers, we have prepared a series of publications on what gave us the opportunity to become free and independent. Today, we are talking about the chairman of the People’s Council Ihor Yukhnovsky.

I am thirty. I was born in independent Ukraine, and I am her coeval. How Independence was proclaimed – I’m going to find it out from Ihor Yukhnovskyi, a participant in those events. Now he is 95. He lives in Lviv, but we talk on the phone because Ihor Rafailovych is under a drip.

Today, he is mainly engaged in theoretical physics, and earlier, the academician was in politics for over twenty years. Ihor Yukhnovskyi was the leader of the first opposition faction in the Verkhovna Rada, a member of four convocations and the head of the Ukrainian Institute of National Memory. Also, he has been working on the new Constitution of Ukraine for many years.

At the beginning of the conversation, Ihor Rafailovych asks if I remember how it was when Independence was proclaimed. I respond «no» because I was a baby at that time. So, he begins the story – an exciting history of Independence. He says that the decision on Ukraine’s independence was made facing the mortal danger that loomed over Ukraine. He recalls his fears and says that now, Independence cannot be taken away from us, that it’s become stronger than us. 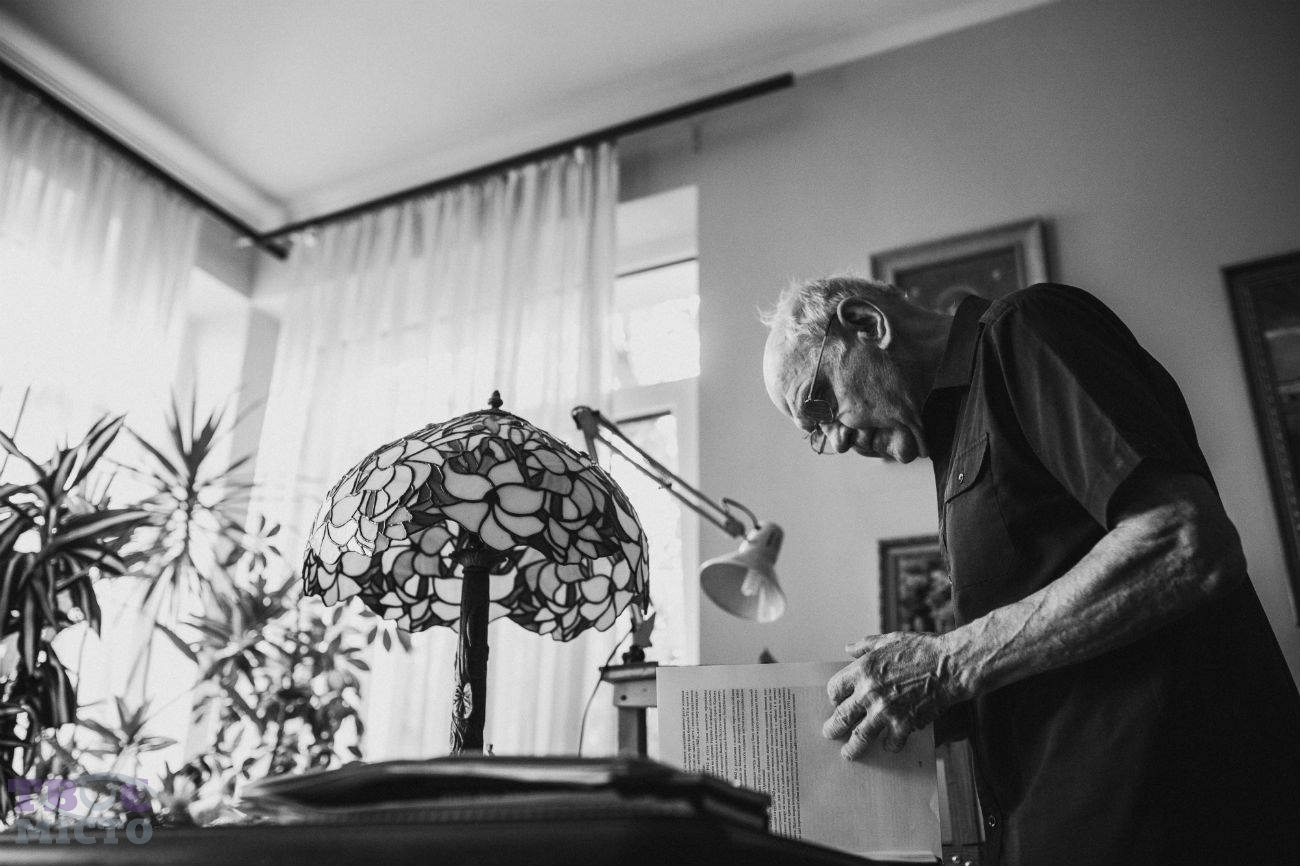 What happened in Ukraine on the eve of the proclamation of Independence, why was this time right?

The Soviet Union was a tough state, it held everything in its hands. Suddenly, the President of the Soviet Union was arrested by the State Committee for Emergency Situations of the USSR (GKChP – Russian abbreviation – ed.), which aimed to remove Gorbachev and save the USSR. It was an extraordinary event in the history of the union when a group of people arrested the General Secretary and placed him under house arrest at a resort.

This GKChP took over the entire Soviet Union. All party organs, including those in Lviv, came under their rule. It’s clear that all those people who raised a coup against the president were rogues of the party, but [they were] influential. They could act in the country as they wished. In general, this led to the disappearance of all fighters for Ukrainian freedom. These were afraid to be arrested. There was no Chornovil, the Horyn brothers in Lviv…

As for me, I was the chairman of the People’s Council and took part in the 19th conference of the CPSU (Communist Party of the Soviet Union). I felt more or less free and quite safe. As soon as the Emergency Situations Committee started acting, I left for Kyiv. I stated that we didn’t accept the arrest of the President of the Soviet Union, that we didn’t accept the State Committee for Emergency Situations. In my presence, Kravchuk called the chairman of the Supreme Council of the Soviet Union in Moscow and told him that he would obey only the decision of the Verkhovna Rada of Ukraine. Meanwhile, the whole world rebelled against Gorbachev’s arrest.

We demanded that Kravchuk convene a session of the Verkhovna Rada immediately, but he flatly refused, saying that it would take place on September 3, as scheduled. Then, on August 22, several deputies collected 150 signatures in the Parliament for the session to take place. Many communists signed up as well.

Was the session opposed to Gorbachev’s arrest?

Yes, but I already understood that we had to declare the Independence of Ukraine…

Did those communists who agreed understand this too? 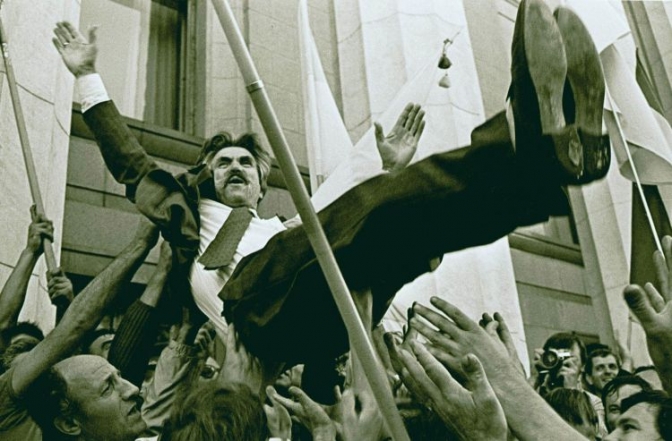 August 24, 1991. People throw up Levko Lukyanenko, welcoming the proclamation of Ukraine as an independent state, near the building of the Parliament of Ukraine in Kyiv

Leonid Kravchuk opened the Verkhovna Rada on August 24. Deputies lined up to make proposals to the agenda. And Levko Lukyanenko, as usual, was late. He was preparing that resolution on independence and should have read it, but Yavorivskyi read it indtead. And… the resolution wasn’t adopted. 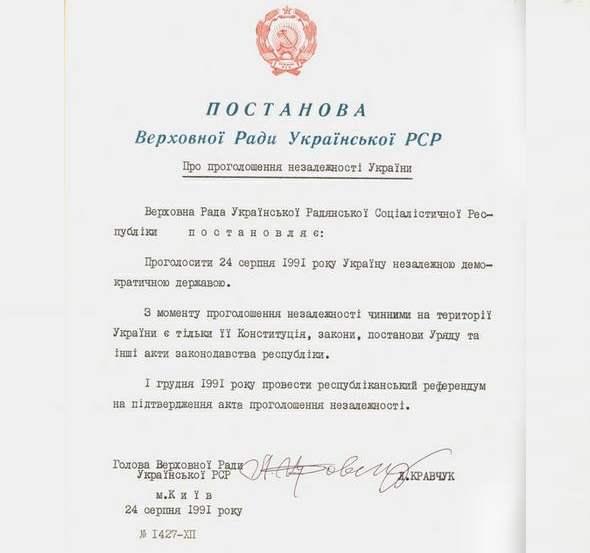 The original of the resolution on the referendum

Could the decision on Independence be revoked in Moscow?

Yes. I was absolutely convinced that we should declare Independence, but still, something was bothering me. I had to speak at that meeting. Mostly, I wrote speeches quickly, but not this time. I didn’t know what to say. I walked around the room of the hotel «Ukraina» and realized that the proclamation of Ukrainian Independence was not a panacea. After all, there was the Verkhovna Rada of the Soviet Union, which could repeal this resolution. Therefore, I decided that the only way out was a referendum to approve the resolution on independence. This was the only thing that could make Ukraine stable. 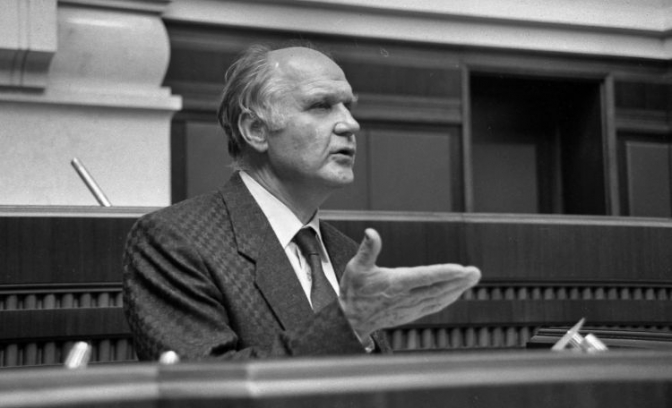 August 24, 1991. The Verkhovna Rada adopted the Act of Independence of Ukraine. Ihor Yukhnovskyi delivers a speech

The majority of communists voted for the referendum. They thought it would show a negative result. Many members of the People’s Council doubted me after this proposal. The referendum took place on December 1.

What were the opponents of Independence, who were they, how did they act?

I’m old, I forgot. And there’s no need to tell it now. The People’s Council was the leading force in the proclamation of Independence. Even though not everyone supported it. We took advantage of the actions of the State Committee for Emergency Situations, but before gaining that Independence, there was a lot of work of the nation for centuries. Everyone who fought, who was in prison. That was their merit. We just made the last jerk.

I almost forgot. Names and events are already known, but no one will tell you what happened in front of the Verkhovna Rada’s walls when the voting for Independence took place. And there was a great force of people – thousands of them. They were festively dressed, holding huge bundles of beautiful flowers. When the deputies came out after the vote, it didn’t matter if you were a communist or not – they greeted everyone. It was such a force, such energy of the people. 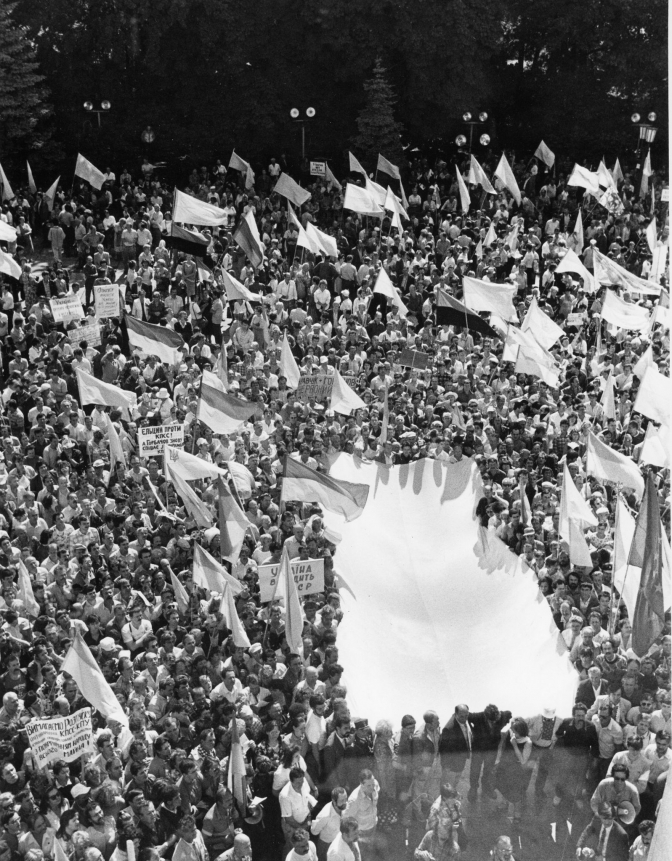 August 24, 1991. People near the Verkhovna Rada, where the Act of Independence of Ukraine was adopted

Imagine you go out, and thousands of grateful eyes look at you, the flowers being thrown... How would you feel? This unity of the Verkhovna Rada and the people created an Independent Ukraine. It was such a huge rise that it’s difficult to convey.

And then, the reality began, the collapse of the Soviet Union occurred. It emerged as a socialist state that nationalized all the property of both the rich and the poor. You don’t even imagine the tragedy of the creation of the Soviet Union.

Eventually, when everything falls apart, the property becomes nobody’s. And as there is no rule, huge looting takes place. From Moscow, they continued to manage foreign relations, trade, energy, and industry. Our government didn’t own the enterprises on Ukrainian territory at all. 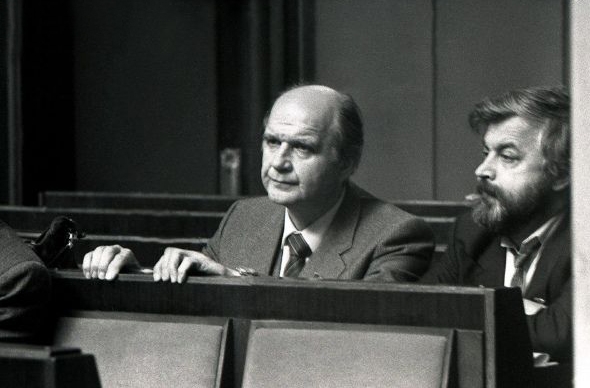 Chairman of the People’s Council Ihor Yukhnovskyi in the session hall next to Les Tanyuk. Photo: zbruc.eu

Would you do something different?

Probably not. However, our biggest tactical mistake was to kick Ivashko out of politics in Ukraine. He was the first secretary of the Central Committee of the Communist Party of Ukraine and a deputy of the Verkhovna Rada of Ukraine. We shouldn’t think that all communists were anti-Ukrainian. He could become the first president of Ukraine. Then everything would be different for us. We wouldn’t lose so much production power. This is clearly seen in the example of Lviv, how much industry was in the city, and what has been preserved?

Do you think we managed to maintain independence?

Independence has become stronger than us. It’s impossible to deprive Ukraine of independence. After the referendum, we were recognized by all the countries of the world – this was an important moment that made us a state. And no one will take it away from us.

At the same time, we shouldn’t think that we are dealing with the rabble in the East of the country today. It’s also wrong to think that Ukraine will defeat Russia by military force. Russia is a very strong, cultural state with an unlimited amount of strategic resources. Therefore, it should be taken into account in our policy. I’m not saying that we should bow to her, but we should be careful, and where it’s possible to negotiate, we should negotiate.

Ukraine must have a smart nation. I think that all our troubles today are due to problems with education. We have slipped to an extremely low position compared to the rest of the world. It’s impossible to correct the rabble that is currently rocking the country. But probably, it’s possible not to educate such people anymore. Therefore, the most important task of a modern country – science, school and universities.

Can we talk about the special role of Lviv residents in the affairs of the state, what is it?

Oh, the people of Lviv are the instigators. They were like that in all national issues, in all language issues. Did you know that the coat of arms, a project with a trident, was designed by the people of Lviv? [These were] Andrii Hrechylo, he was a historian, and an artist Ivan Turetskyi. I remember that the Verkhovna Rada was supposed to consider the issue with the coat of arms, but it wasn’t there. Specialists from Lviv were invited. They said it would take a month. I say no, needed in two days. They painted for two days and a night. This is a very difficult task. They determined the length of each segment, each angle, each radius of the circle, each depth, everything to make the coat of arms look good. We have it geometrically competently composed.