Wednesday 11 May 2022: Ukraine Situation Summary: The need to destroy the Russian regime, Ukraine in the Eurovision final, new coins in Estonia

UKRAINE: Ukrainian Deputy PM Vereshchuk calls on the world community to join the evacuation of the seriously injured from Azovstal.

The Russian occupiers continue shelling Azovstal, where Ukrainian defenders and civilians are stationed.

The invaders fired on the Ukrainian military from aircraft, artillery, and tanks, trying to break through the defenses.

The first President of Ukraine Leonid Kravchuk died, was ill for a long time and underwent rehabilitation in Germany after heart surgery. He passed away on May 10 at 5:00 pm Kyiv time.

Zelensky said that the Armed Forces are gradually pushing the occupiers away from Kharkiv.

«Eurovision-2022»: Ukraine has reached the final of the competition

Hungarian Foreign Minister Peter Siarto said the country was urging the EU to provide a solution, including economic aid for recovery and compensation, to help Hungary maintain an embargo on Russian oil.

Putin intends to impose martial law in Russia and start a war in Transnistria, which is a breakaway region of Moldova and borders Ukraine. It’s not too far from Odesa – US intelligence

Lithuanian Foreign Minister Gabrielius Landsbergis believes that not only the head of the Kremlin, Vladimir Putin, but the entire regime should be replaced in Russia. Countries bordering Russia will not feel completely safe as long as Putin’s current dictatorial regime persists in Moscow.

At an extraordinary meeting of the Supervisory Board of the National Bank of Estonia Eesti Pank approved the design of a new coin with a face value of 2 euros.

According to the author of the design, Darya Titova from Kharkiv, it will depict a girl as a symbol of tenderness holding a bird in her hands. In addition, on the back of the coin they also decided to add the Ukrainian slogan in Latin – «SLAVA UKRAINI».

For the first time, the Eesti Pank coin will have a text in a foreign language, but this is a special situation. «Glory to Ukraine» illustrates Ukraine’s desire for freedom, – said the Chairman of the Supervisory Board of the Central Bank of Estonia Mart Laar.

The official also added that Eesti Pank was looking for ways to support Ukrainians in the struggle for independence, and realized that minting a specially designed coin would help support Ukraine financially.

Thus, the Estonian bank will transfer all proceeds from the sale of the new coin to the National Bank of Ukraine. In addition, it will help convey a symbolic message to Europeans. 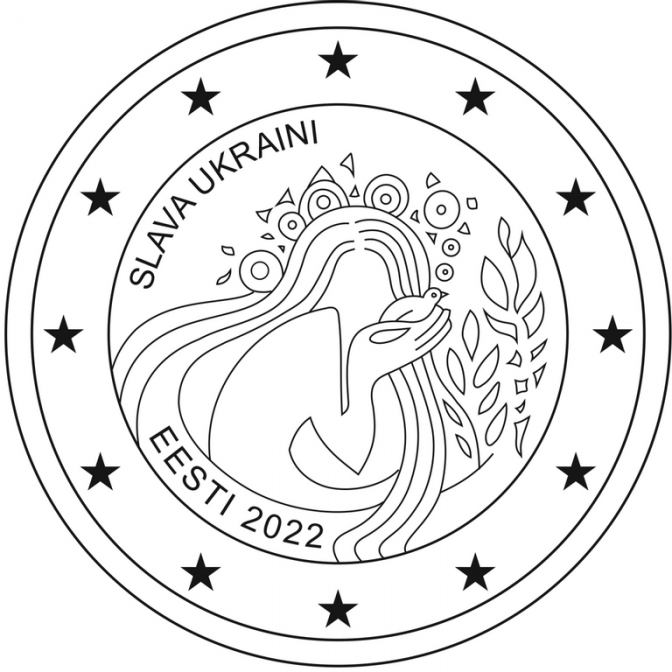 In the area of ​​the village of Novomykhailivka there were repeated attempts to break through, without success. At night in the area of ​​Svitlodarsk, the Russians used phosphate munitions. The evacuation of people from the front zone continues. Despite constant shelling, bombing and assaults, Azovstal continues to hold in Mariupol.

During the strikes, a boarding school for children with disabilities in Hirske, which had new repairs and modern equipment, was damaged. Children and staff were evacuated in advance. The main gas pipeline in Severodonetsk was damaged, leaving the city without electricity, water and gas.

The occupiers fired on the border with Kherson region: they hit the fields in Zelenodolsk and Shirokiv communities. There were no casualties or damaged infrastructure.

In the afternoon of May 10, shelling took place in the Bereznehuvatska and Snihurivska communities, the villages of Novoruske (2 residential buildings burned down) and Zorya. In the water area near the city of Ochakiv, the shelling hit a civilian barge, no one was injured. Also occupiers struck on the outskirts of Mykolayiv, destruction and victims aren’t recorded, grass burned.

Many explosions were heard during May 10 and on the night of May 11. The most difficult situation remains in the settlements bordering Mykolayiv and Dnipropetrovsk oblasts.

There are forest fires in the region, the occupiers do not allow anyone to put out fires. Dozens of villages and settlements are left without electricity and water. The Russians do not allow entry and exit from there.

During the day, the intensity of shelling in Kharkiv district increased: 6 wounded. In Lozova and Izyum districts – 2 victims, and in Kupiansk district one person died. In the Izyum direction, the occupiers are preparing new offensive attempts, but the Armed Forces continue to hold positions.