Where to go from Lviv for a weekend? Visit Ivan Franko’s manor

20:31 09 June 2021
Tweet
313 0
Traditionally at the end of May the memory of Ivan Yakovych Franko is honored. This year on 28 May, Ukraine marks the 105th anniversary of the writer’s death and 100 years since his reburial was celebrated. On the whole, there are four museums of «Kameniar» («Stonemason» – Franko’s pseudonym) in the world: Three of them are located in Ukraine, and one in Canada. However, to feel and understand the writer better, Tvoemisto.tv proposes you visit a tiny village of Nahuievychi, where he comes from. 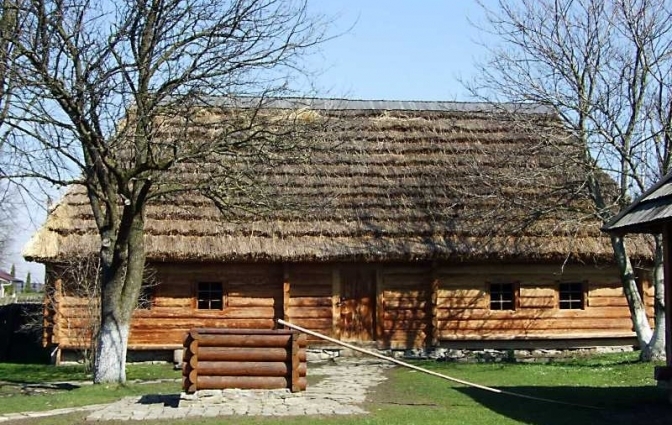 Where is the village located?

Ivan Franko’s native village of Nahuievychi, praised many times in his works, is located near the town of Drohobych in the Lviv region. The distance from Lviv to Nahuievychi is about 100km or 60 miles.

Today, the State Historical and Cultural Reserve «Nahuievychi» has been established in Franko’s native village, which includes the manor of the writer’s parents, his own house, memorial museum, sculptural composition «Ivan Franko and world literature,» and memorial complex «Ivan Franko’s Path».

The famous countryman was revered here, but the museum opened only after World War II in 1946, in the village’s best and largest house, though it had nothing to do with the writer. Only in 1981 (on the 125th anniversary of his birth) it was decided to «move» the Franko Museum closer to his father’s estate. The house was built according to the memories of «Kameniar» himself:

«My parents’ house was under a thatched roof, sewn with rye straw tassels. It was probably built in the late XVIII century, during the first settlement of Nahuivska Sloboda («sloboda» is a historical type of a settlement in Ukraine), and my father’s mother bought it with a whole yard, 12 prutiv (about 12 hectares) of the field and all household appliances some time in the 20s years of the XIX century. According to the custom of almost all foothills, it was oriented with windows to the south, had two stables…»

Sculptural ensemble «Ivan Franko and world literature». This monument is peculiar due to the spatial vision and skills of a national artist E. Mysko, an honored figure in Ukrainian art J. Sadovsky, and artist S. Mygal. The sculptors depicted not only the bronze Kameniar, but also his inspirations and like-minded people – Homer, Shota Rustaveli, Shakespeare, Goethe, Mickiewicz, Pushkin, Lev Tolstoy, Petőfi, Nezval, Botev, Dante. It was their works that Franko studied and translated for a Ukrainian reader. Ivan Franko’s memorial museum. An exposition about the writer’s childhood and his studies in Drohobych can be found on the ground floor. «This is the Golden Book of Honor», – says Maria Borysenko, the museum’s curator, about the most valuable showpiece. – Franko studied in Drohobych, and the names of the best students were entered in this book – not by alphabet, but according to the level of knowledge. As we see, Franco was first in every class». Paintings by local artists, depicting Ivan Yakovych, attract the visitors as well.

The second hall is dedicated to the memory of the writer. Here you will find many of his books from different years and publishers. On the second floor there is a permanent photo exhibition «The writer is 150-155 years old» (Ukrainian president Victor Yushchenko was present at the celebrations, which is why he is seen the most on the photos), and another exhibition of Drohobych artists called «The landscapes of Nahuievychi». Also ceramics, embroidery, burghers’ clothes, etc., are exhibited sometimes. The manor: houses, shopa (a barn), shpykhlir (a granary), a smithy, sheds and stables. The house contains ancient household items, utensils, and clothes collected from Nahuievychi and nearby villages. The most valuable showpieces are the mirror of Franko’s mother, a bowl and the cradle in which the children of Yakiv Franko (writer’s father) swayed. Tools from the smithy once belonged to an old blacksmith from Nahujevychi, who donated his instruments for display. Some of them are also from Franko’s father’s smithy. There are also some beehives in the yard. Ivan Franko’s path. Residents of Nahuievychi call it the most romantic place in the whole neighborhood. On this path, you can meet the heroes of Ivan Franko’s literary works: Zakhar Berkut, Prometheus, Stonemason, Bell, Moses, Ripnikam, Song and Labor, Beloved, and many others. In addition to the wooden sculpture itself, you can read poems, which are also carved there. There is a glade of Franko’s fairy tales there as well.

Writer’s house. It is hidden behind the museum. Usually, celebrations of local and regional levels and conferences take place there. On the second floor there is a small hotel.

One more event occurring in Nahuievychi is «Frankofest». Every year on 27-29 July, the museum itself is open at night, there are lectures about Ivan Yakovych, girls play the violin, and visitors drink mulled wine.

It is worth noting that Ivan Franko dedicated numerous scientific works to his village, for instance, «Neolithic finds in the vicinity of Nahuievychi and their modern uses», «Carol in Nahuievychi», «Burning of ghouls in the village of Nahuievychi in 1831», «Forest damage, punishment in Nahuievychi «,» Tatar attacks on the foothills «.

And on the whole, he created many of his colossal literary heritage in Nahuievychi, including the novel «Zakhar Berkut», many short stories, poetry, translated Shakespeare’s sonnets, Goethe’s «Faust», Gogol’s «Dead Souls’’ into Ukrainian, researched Shevchenko--another Ukrainian literary legend--and translated his works into German language. At the same time, he managed to work on the land as an ordinary peasant, and often lived in poor material conditions, having neither shoes nor lamps to work in the evenings.

What transportation to get?