White House Staff Asked Me to Leave Simply Because I Had Been in Ukraine. Opinion

17:59 22 January 2022
Tweet
571 0
Whether fearful or careless, both Biden and Trump White Houses have hurt Ukraine. President Biden more or less encourages Russia to invade, while Trump staffers were so petrified of impeachment threats they could not even be in the presence of someone who had recently visited Ukraine. 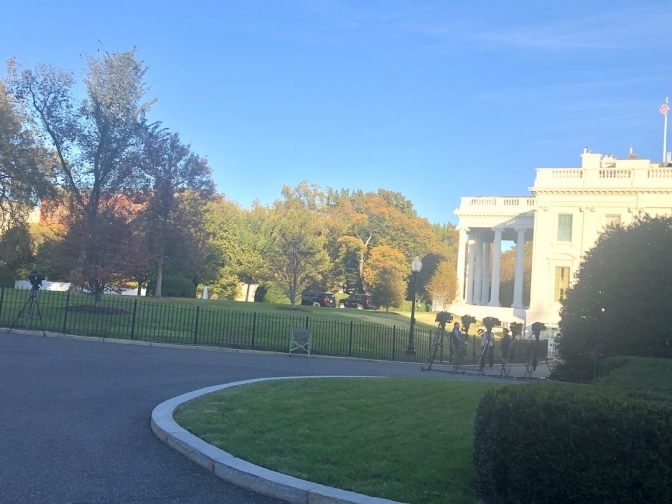 In just a few seemingly careless words – «My guess is [Putin] will move in. He has to do something» – U.S. President Joe Biden all but abandoned Ukraine in a 19 January press conference. This is not new behavior from the White House. In October 2019, I saw first-hand that Donald Trump’s staff was scared to an astoundingly stupid level by the mere mention of the word «Ukraine»: so much so they seemed incapable of rational analysis.

Read more: «Putin is Rattling Nerves of Americans and Europeans, Not Ukrainians.» Podcast.

I visited the West Wing just days after returning from a worldwide trip that concluded with two months in Ukraine. In part I was hiding out while Showtime released the TV show The Loudest Voice. It was about my old mentor Roger Ailes, the founder of Fox News, and it featured an actor, Emory Cohen, playing me. I was quite happy in my foreign exile away from the American media madness, and away from my life being on the screen, but I decided to return to speak about how to build better media at a conference in Washington.

At the time, Democrats were agitating for the impeachment of Donald Trump over a summer phone call he had with Ukraine’s President, in which Trump reportedly asked for an investigation of Joe Biden’s son’s business deals in Ukraine. And so Ukraine was a loaded word in America’s capital city. I realized this quickly: Hours after landing back in the USA, as I was checking into the Marriott Wardman-Park Hotel, the bellhop in the elevator asked where I was coming from.

«Ukraine!» he said, jumping to the other corner of the elevator. «Don’t tell people that.»

He was laughing, but I understood immediately that Ukraine had lately been a scary topic in the imperial American capital. Nevertheless, I did not expect this sort of behavior at the White House, which I visited two days later to meet up with a friend who was working there.

Waiting in the reception room of the West Wing, I chatted with the secretary. Do I tell her I have been in Ukraine, I wondered. She asked where I live, and, ah, what the hell, I told her I had been traveling the world and my most recent stop had been in Ukraine. No reaction beyond a smile. All was well. While I waited for my friend, she took me on a tour of the West Wing; President Trump was out of town.

My friend showed up and over the next hours I ran into other friends who worked at the White House and at the Old Executive Office Building. Now relaxed, I was telling people about my great experience in Ukraine the previous months. I thought they would want to know more about this thriving civil society in the shadow of Russian mordor: a country where people loved freedom and, ever since their 2014 Euromaidan Revolution, knew how to keep it.

Later, I was standing on the North Lawn outside the West Wing entrance, talking with two friends. A woman, one of the first employees of Donald Trump’s White House, approached. My friends introduced me to her.

«So what’s your story?» she asked, in a friendly manner.

By now I wasn’t worried, so I confidently said, «Ah, well I’ve been in Ukraine the past two months.»

Given how Ukraine had been in the major headlines every day, she might want to ask how my experience was, what did I learn, etc.

But no. She reacted like a timid terrified toddler.

«I don’t know you. I don’t know this person! Who is this person!! Who did you bring here!!!» she spake in a crescendo of fear. She looked like a melting witch as she backed away from me.

My two friends also backed away, quietly. One of them, a good-natured rogue, was laughing; the other, always serious, more serious. They started to ascend the steps of the Old Executive Office Building across the driveway, while still watching me alone on the lawn. Suddenly the situation seemed quite serious. I remembered that snipers surrounded me, on the rooftops, maybe in the bushes: the most secure place in the world, more or less.

«Well, should I go?» I asked my friends. The terrified woman had disappeared by now into the safety of the West Wing.

«Yeah, I think you should go,» said the serious friend.

«Ah, damn, my cell phone is still in the West Wing,» I said. All people, visitors and staff, had to leave their phones with the Secret Service after one too many leaks to the press from the president’s office. «Can I go get it?»

«Yeah but be quick,» said the serious friend, seriously.

Phone retrieved, I hurried left the ground, feeling like I’d become enemy No. 1, simply because I had spent two months in a lovely, free country where people love America. As I pushed past the metal gates through which only hours before I had been cordially welcomed I realized that DC was in the grip of irrational madness.

Congress was seeking to impeach Donald Trump over a phone call he made to Ukraine’s president. Congress knew about that phone call in part because a fat Ukraine-born U.S. military official, who worked in the White House along with his fat twin brother, a national security official, had overheard a mysterious whistle-blower talking about that phone call. Meanwhile, the president’s electoral rival, Joe Biden, had a son, Hunter, who in the wake of Russia stealing Ukraine’s oil-rich Crimea peninsula, received, starting in 2014, some $50,000/month as a consultant for energy firm Burisma, owned by an ally of ex-President Yanukovich who had fled to Russia.

In so many strange ways, Ukraine has been in the middle of American affairs, and yet, when I went to visit the White House, when I could have shared insights and stories from this country which stood against Moscow, the great bugbear of recent American elections, I was kicked off the grounds for the simple reason that I had been to Ukraine.

How could such officials stand up to Moscow, or to any other threat, if they were so scared of me? The impeachment of President Trump over that Ukrainian phone call scared the administration into abandoning Ukraine. This is a sentence I think we need to explore further.

And now President Trump’s successor has abandoned Ukraine in one of the few instances when he has spoken before the press.

Ukraine, and many other countries, including the «America of regular people,» suffer from the whims and fears of our comfortable kings.

The author’s column is a reflection of the author’s subjective position. The editors of Lviv Now do not always share the views expressed in the columns, and are ready to give dissenters the opportunity for a reasoned answer.