Zelenskyi versus evil: the antagonist in the Ukrainian narrative of war

17:22 16 September 2022
Tweet
215 0
This is the second part of the series of publications by Solomiya Kryvenko, a PhD candidate in political sciences at Ukrainian Catholic University. Here, she analyzes the speeches of Ukrainian and Russian presidents in order to show how narratives about our country emerge, how they tell the story of each of us, and what is our image in the eyes of the whole world. 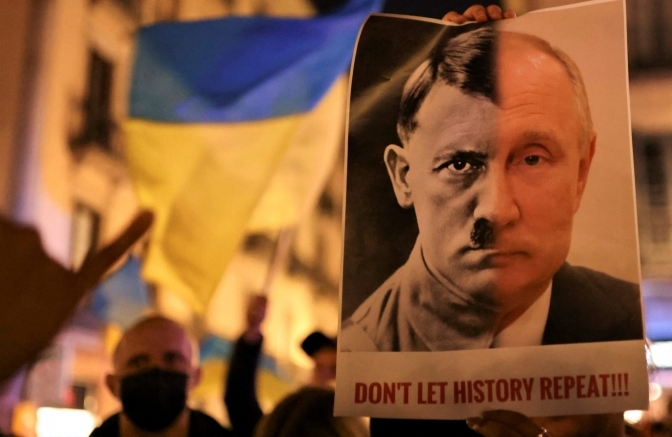 «He who is doomed to crawl will not take away even the Snake Island from those who are destined to fly.»

The Ukrainian people and President Volodymyr Zelenskyi, as the main hero in Ukrainian history, are fighting the villain Russia. The latter causes harm and persecutes the protagonist’s desire to «just live freely on his land.» In his speeches, Zelenskyi uses the following names to address the antagonist: Russia, Moscow, the Russian president, and Russian invaders:

Read also: Whose side will the world take? Analysis of Putin’s and Zelenskyi’s speeches during the big war

To denote the methods by which the villain fights, the Ukrainian President uses shortcut words: «barbarism», «Nazi», «terrorism». The antagonist appears «maniacal» and «fanatical»

In Zelenskyi’s speeches, the concept of «terrorism» is accompanied by the label «invasion»:

«Terrorist invasion» is a combination of two concepts denoting a threat, but rarely used side by side due to differences in combat methods: terrorists usually act in groups or alone, covertly, an invasion – a massive, open attack. Terrorism is a global problem of our time, invasion is a concept that in the history of Ukraine is most often associated with the Mongol-Tatar invasion.

A combination of words with a negative connotation was also used by W. Churchill to denote the enemy. In the «War Speech», he used «the pestilence of Nazi tyranny», juxtaposing a deadly disease, a hostile ideology and the form of an undemocratic form of government. Such a rhetorical technique strengthens the emotional response to the image of the antagonist, preventing the listener from remaining indifferent.

Distinguish yourself from the villain

Every hero is afraid to turn into the one he opposes. He is afraid that at some point, he may seem like his opponent. One of the functions of markings is to create a boundary between «us» and «them».

The Ukrainian narrative emphasizes the differences between Ukraine and Russia, between the hero and the antagonist, and between the worlds for which each of them is fighting.

Read also: War, conflict, or aggression. What is the correct name for the struggle of Ukrainians and the actions of Russians

Instead, Russian «history» tries to blur these differences, and with them – the boundaries between the main hero and the villain in Ukrainian history. Russia seeks to show that the opposition of Ukrainians and Russians is a misunderstanding. Ukraine, they say, became a product of Russian politics, and only «nationalist» politicians deny this. The story about brotherhood, cultural and historical unity of Ukraine and Russia creates the impression that what is happening is not a «terrorist invasion», but a «family dispute». In a speech on February 21, 2022, Putin said:

To draw a clear border between Ukraine and Russia, not only as between two states, but also as between cultures, traditions, and narratives, and then to approve this border at the highest official level – is one of the main tasks that not only Ukrainian politicians, but Ukrainian society in general is facing.

The author’s column is a reflection of the author’s subjective position. The editors of Tvoe Misto do not always share the opinions expressed in the columns, and are ready to give those who disagree the opportunity for a reasoned answer.