Lviv is a city of about 750,000 in Ukraine, a nation of some 40 million. Located among hills and plains in the country’s west, Lviv has an innovative tech spirit, exuberant street-singing, jazz-filled cafés, buzzing coffeehouses, elaborate restaurants, and frequent festivals celebrating a cuisine and culture nourished by the region of Ukrainian Galicia and the Carpathian mountains. 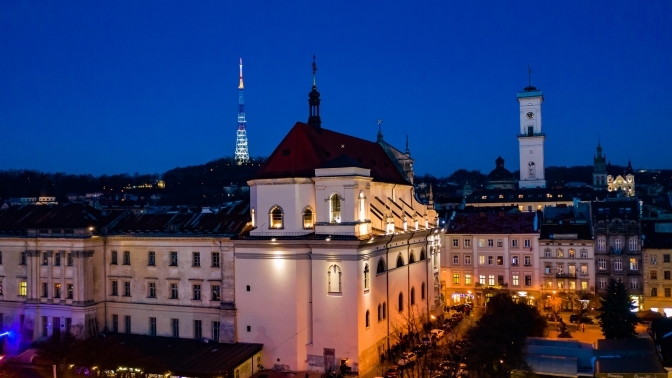 A popular tourist destination for foreigners and Ukrainians alike, Lviv has a unique ethos as the world’s only majority Greek Catholic city, the nexus of East and West. On holidays the cobbled streets of the pedestrian-focused centre are filled with people wearing the traditional embroidered garb of the Ukrainian people: the vyshyvanka.

Named for Leo («Lion»), the son of the great 13th century king Danylo of Galicia, Lviv is sometimes called the city of lions, coffee, and rain – reflecting great things commonly encountered here, the lions in the form of a staggering number of statues and carvings; the rain sometimes in the form of snow; and the coffee, brought by invading Turkish armies, in many formats.

Located amid large hills including the High Castle and emanating from its stately central tower, the city of Lviv is a 90 minute flight to both Kyiv and Vienna, with many train connections around Ukraine and beyond. The climate is temperate, and access is easy by train, car, or bus to the Carpathian mountains and local forests and lakes.

A crossroads city that has weathered many invasions, Lviv has been known as Lemberg (German, from Austro-Hungarian days), Lwow (Polish), and Leopolis (Latin). A place of dissidence, art, and learning during the years of Soviet oppression. Together, these elements make Lviv a place of conversation and ideas whether in the Ukrainian language or in English.