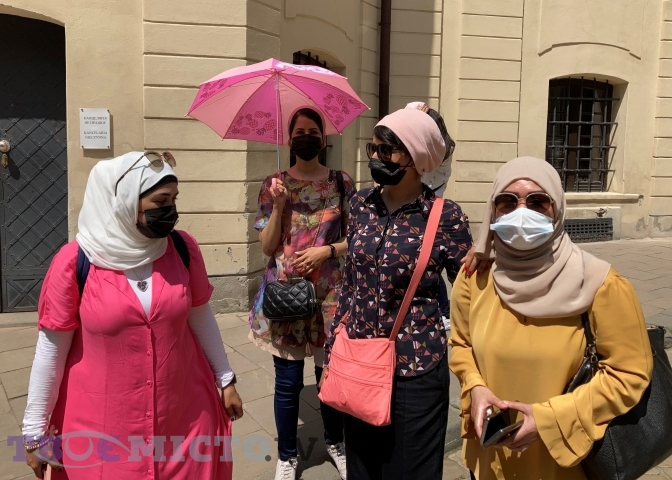 Lviv becomes a centre for tourists from Saudi Arabia

Tweet
3178 0
Tourists from Saudi Arabia have started coming to Lviv. Tvoemisto.tv found out what in Ukraine and Lviv in particular, attracts them the most. And a tip for Lviv businesses: reach Saudis on Twitter and Snapchat.

It’s crowded and hot on the Rynok (Market) square, tourists gather in groups. A couple of tourists from India take photos with sculptures of lions at the entrance to the city council. Nearby, guys from China are taking selfies and joking loudly. And there are people from Muslim countries who attract a lot of attention – quite atypical tourists for Lviv and for Ukraine in general, but, as it turned out, they are very desirable here. «It’s our first time in Ukraine, in Lviv, and we are very impressed by everything. Lviv has nice architecture, diverse, especially the ancient buildings», – says Hannah.

She came to Lviv from Saudi Arabia with four friends. The girls settled in one of the hotels near Shevchenko avenue. They will stay in Ukraine for two weeks, including two days in Lviv, and also plan to go to the Carpathians.

Hannah says communication issues occur sometimes, but they are easy to solve with the translator on a phone.

«We use English, but have to translate everything, we often use a mobile translator. People are very open here, trying to communicate. It’s impressive», – she added.

The girls chose Ukraine, as they say, because other European countries are closed for them due to the epidemic. Moreover, last year, Ukraine relaxed the visa regime with a number of Persian Gulf countries, and this month, the first direct flights from the Saudi capital Riyadh to our country have started.

«Travel without a visa, no 10-day quarantine after arrival – these are the main reasons. The European continent is very special and interesting, but due to the quarantine not all countries have lifted their restrictions» – the girl explained.

Girls in hijabs, with clothes covering the whole body: It should be so according to Saudi Islamic tradition. They also don’t eat pork, which shows up in so many meals here, although they said they’ve tried Ukrainian meat-free borsch (borsch often includes a chunk of pork.

They plan to go to the Opera house and visit several more museums.

«Every day, 200-300 tourists from this country come to Kyiv. It’s time for food businesses to introduce halal», – Anton Taranenko, Chairman of the Board of VisitUkraine.today, wrote on his Facebook page.

In July, Flynas will come to Lviv as well. A ticket will cost over $700, at least. And on Sunday, June 20, the first SkyUp charter flight from El Qasim, another city in Saudi Arabia, arrived in Lviv.

Tourists from this country are desirable in many countries around the world, because they spend much more money on travel compared to Europeans, say tourism experts. Saudi Arabia is an oil producer and exporter, a high-income country.

Vitalii Kulyk, director of the Lviv City Council’s «Tourism Development Center», told Tvoemisto.tv that there was less than 1% of tourists from these regions in Lviv before. Now, he says, we are lucky, and such a situation will probably be maintained until Europe opens its borders to tourists from Saudi Arabia.

«Principally, they don’t know where they are coming. Ukraine is new for them. Here, on the spot, they start finding out what exactly interests them. Outdoor recreation is popular, especially in Bukovel. They stay in 4-5 star hotels. These tourists are quite generous on tips, so they are very desired», – says Kulyk.

He adds that Lviv lacks tourist content in Arabic, but in general, these tourists don’t differ much from the European ones.

«We are not visited by tourists who are very orthodox, religious, or live by Sharia law. The tourists coming here are secular in their behavior. Chiefly, these people have been to many countries in the world» – he says.

According to Vitalii Kulyk, a delegation of tour operators from Saudi Arabia will arrive in Lviv this week. He says that the city will «establish connections» to make this tourism organized, but now it’s mostly individual.

«They should not be offered alcohol»

Lviv restaurateur Vardkes Arzumanyan says that tourists from Saudi Arabia are not picky about food. They are mostly coming with their families.

«There is no halal food, they understand that. But the menu has a lot of other things – lamb or veal dishes. They are happy to taste our traditional dishes. Once we served the Turks – they calmly ate pork and joked that they were unbelievers. There are no problems. Tourists from Saudi Arabia mostly come with their families, we know that they should not be offered alcohol – we are happy for such guests, they are very good tourists», – says the restaurateur.

Meanwhile, Saudi Arabia is not a popular destination for Ukrainians. You need a visa to enter the country, after arrival, you need to spend seven days quarantined in the observation area, and finally, you need a PCR test on the first and sixth day of your stay in the country.

Saudi Arabia is a fairly closed country with a population of over 30 million people. It occupies most of the Arabian Peninsula, is the second largest country in the Arab world after Algeria. The capital is Riyadh, where more than 6 million people live. Saudi Arabia has Sharia law, a theocratic monarchy.

The Persian Gulf countries can become a promising direction for the development of tourist flows to Ukraine, stated the head of the State Agency for Tourism Development Maryana Oleskiv on her Facebook page.

«Apart from daily flights from Riyadh to Kyiv, flights from that point to Lviv and from Jeddah to Kyiv have been launched since July. This is a good chance for Ukrainian tourism sphere to recover from the global lockdown and grow significantly in a few years», – she said.

Maryana Oleskiv adds that specialists in the tourism industry should take certain specificities into account. Tourists from Saudi Arabia often travel with their families, so they are interested in family entertainment. They are looking for hotel suites with several sections. They desire food that is halal, suitable for the Muslim diet, payment is conducted preferably by the American Express card. Tourists from Saudi Arabia are active tend to be most active on the social networks Snapchat and Twitter, so it is there where Ukrainian travel products should be advertised.