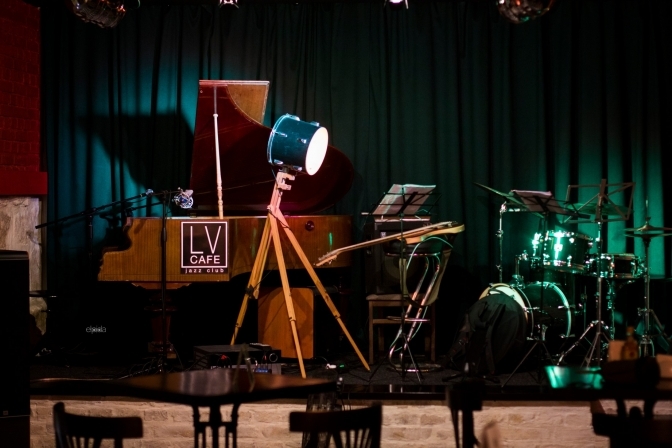 The music of free people in Lviv

Tweet
1068 0
In a brick-walled cellar off Kryva Lypa («Winding Linden») Passage, a jazz trio from Odesa was playing: like Debussy or Chopin, a soft, bright, quiet take on the folk song, «Marigold.» I sat in a booth against one side, the stage to my left. Facing me, along the opposite wall, I saw three people each at separate tables: an older woman, a middle-aged man, and a younger woman, all leaning back, with their eyes closed. Their occassional foot-tapping proved they were awake.

«True art will take over the city very soon, something extraordinary and fresh.»

«Jazz pushes you to think about your life, your emotions, your real inner word.»

The music had brought them–and me–to a retreat from the non-normal world, from the chaos of the covid era. So much of the grand music places of New York, Paris, New Orleans – have been silent the past year. But in Ukraine with shorter lockdowns and different rules, the LV Café jazz club has become a thriving hub for musicians and listeners alike.

Last August, the club began offering lively jazz jams, each one numbered in succession, a defiance against this shutdown era, a sign of building momentum, no. 3, no. 9, and now, this week, no. 27.

Yakiv Tsvietinskyi, jazz trumpeter and composer, originally from Dnipro in the east, was one of the LV Café regulars during the Christmas season. He’s now in Basel, Switzerland, as one of nine global musicians participating in the esteemed Focusyear jazz program, where he plays with visiting jazz masters from all over the world. He calls the LV Café a «jazz-education hub.»

«You can come at any time to hear cats play their chops off with love and energy, without looking on schedule or checking the ticket price,» he said, speaking in the style of a real jazz guy, almost from the other twenties, the roaring ones. «I go there every time I have a free evening, and always with my instrument.» 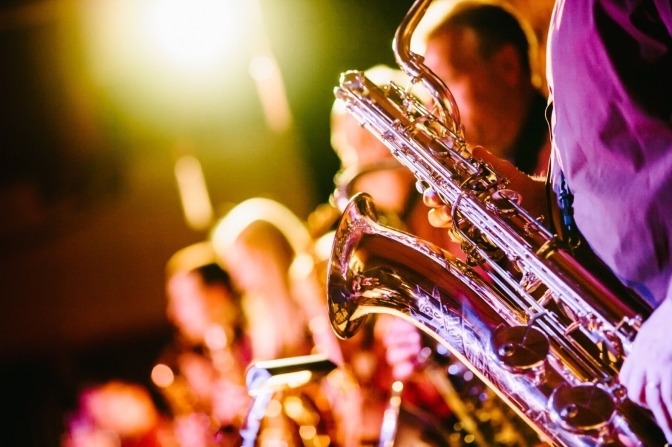 The LV Café has become the place the musicians want to go, whether or not they are on the billing that night. In the past months, I’ve seen the regular jam players grow into a community, all mentored by Andrew Arnautov, a Russian-born, Ukrainian-speaking musician, who lived for a long time in the United States and who created these sessions.

«The main thing about a place like this is you have to be aware that musicians are making it,» Arnautov tells me. «If you want to have a real jazz place you have to provide a platform for creativity where they can express themselves freely.»

That platform is the vision and work of Yurii Sadovyy, the owner and creator of LV Cafe. Arnautov calls him, «the Mother Theresa of local jazz musicians.»

The night of the Odesa trio, I sat in back of the maze of little rooms, under stone arches. With a bottle of Portugese wine, Sadovyy and I talked about his vision.

An economist for the city, he quit his government job in 2011 and went to Poland to work on farms and in restaurants. Returning home in 2015, he transformed a part of a basement he owned into a tiny music bar with five tables. He welcomed all kinds of musicians, mainly cover bands.

«I was looking for a concept,» he said.

And thus for the first time, Sadovvy heard jazz. «I understood this is really music, with soul... With cover bands you know the songs, you know everything they are trying to do. But when the jazz band is playing you don’t know what is around the corner.»

He decided: His underground café would be a jazz club. He and his wife, Natalia, an artist who paints on canvases and also designs tattoos, renovated the other rooms of the undercroft. Now there’s a large jazz hall where the music happens and off-shoot rooms where you can talk while still hearing music. Paintings and photos by local artists adorn the walls. And there’s a full menu of Ukranian staples–the potato pancakes and dumplings with a variety of toppings, soups du jour, nice wines and beers, good cocktails, milkshakes–and jazz music nights of the week, except for Sunday salsa dancing.

I’ve lived in New Orleans and New York and LV is the best of both: the quality and style of New York but with the warmth, hospitality, ease–and decent food–you can find in New Orleans. The staff, including housekeeper Pani Maria, take a peak at the stage when they can and listen to the music, too: a symbol that the cafe is not just a business but a gathering place with a communal spirit. 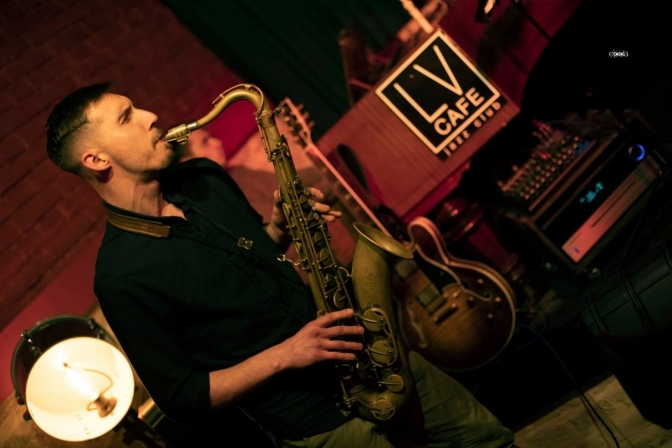 Nicko Shevelov, a Lviv-born drummer now playing at the best spots in New York and featured in a BBC report about quarantine jazz in Central Park, agrees that something special is happening at LV Café. He credits a «tight thriving community of artists who grow together, and a very receptive audience.

«The first time I went to LV I was amazed,» says Shevelov, who came back to Lviv for a few weeks during Ukrainian Christmas. «It was packed, the audience was engaged. In New York even stars don’t get an audience like that.»

Jazz, all the time?

After a Shevelov trio played at LV in January, I persuaded a friend to join me the following day at Dzyga, the storied Lviv music and art venue. Shevelov was drumming once more the day before returning to NYC.

«Can you go to jazz two days in a row?» my friend asked.

I hadn’t considered this. Have I been listening to too much jazz in Lviv? If it’s Wednesday, my friends know I’ll be there. And sometimes Thursday and Friday and, well, Saturday, too.

Because Sadovyy is always at the club, I asked him if it’s been good for his health, hearing jazz all the time.

«If you feel it, love it, how it would be too much? If you like good wine, how would it be too much to have some tomorrow, too? The experience will not become worse. If you like this music, the music will be great for you today, tomorrow, and beyond. It’s the music of a free people.»

That night, Sadovvy was driving the Odesa players to the train station, and so, with the show over, we concluded our conversation. I took the bottle of wine we were sharing, which had some little left, and walked into the jazz hall, passing and fist-bumping in the corridors all the regular musicians and the staff I’ve come to know the past months.

The evening’s headliners were packed to head home but the usual crowd of musicians, like kids on Christmas morning, are always eager to get to that stage, and a lively session was forming: saxophones and trumpets conversing with piano, drums, bass.

The mentors, past and present

I plunked the wine bottle on the table where sat Andrew Arnautov, the bass-and-trombone-playing leader of the jazz jams. His wife, Elpida, photographer and artist, teaches Latin and Greek at the Ukrainian Catholic University across town and often takes pictures of the jazz shows.

As I sit talking with Arnautov, other musicians come by, sit for a bit at the table.

«This is the place where I feel warm, even sometimes treat there as home,» Dmitiry Zuyev, upright bass player, told me.

It’s clear from conversation with Arnatauv and many others another place, person, and time is behind what’s happening now at LV Café. Markian «Marek» Ivashchyshyn, who died in 2019, was a musical and artistic legend, a veteran of the Student Brotherhood and wild first years of post-Soviet liberty, who created the Dzyga creative-hub at the end of Virminska Street and inspired many in Lviv and throughout Ukraine.

«Marek, his mission was to bring all the people together, even after his passing, when we were all saying goodbye,» Arnatauv said. «His body was lying in Dzyga in a casket on the second floor and we were having a jam session. During that very night, he was no longer with us but thanks to his influence, so many projects were created.»

Now, in the field of jazz in Lviv, it seems Sadovvy is carrying on Marek’s spirit.

Sadovyy had told me about needing to be ready for jazz, because it takes you somewhere.

«It is much easier to listen to pop music,» he says. «Jazz pushes you to think about your life, your emotions, your real inner word.»

But Arnautov said jazz’s complexity is no reason to avoid it. «It’s is my job to understand [the music],» he said. «It’s not your job to understand it. You don’t need to know anything about it, you just need to like it and enjoy»–like those three people, each at a separate table, with their eyes closed listening to the Odesa trio.

Lviv is a city of music–most noticeably, in the streets: Summer or winter, rainy or dry, you can nearly always find a musician with a bandera or a guitar, and often a crowd of people singing along. The Fest group, which also now owns Dzyga, introduced tango dancing in the Rynok (Market) Square, and coffeehouses including Mozart on the Dominican square and Karmel at St. Michael’s monastery also host nights of tango. There’s the grand Opera House, the Philharmonia, many theatres, and of course except for 2020, the Leopolis Jazz Fest every June bringing many jazz heros, including the late Chick Correa, to Lviv. 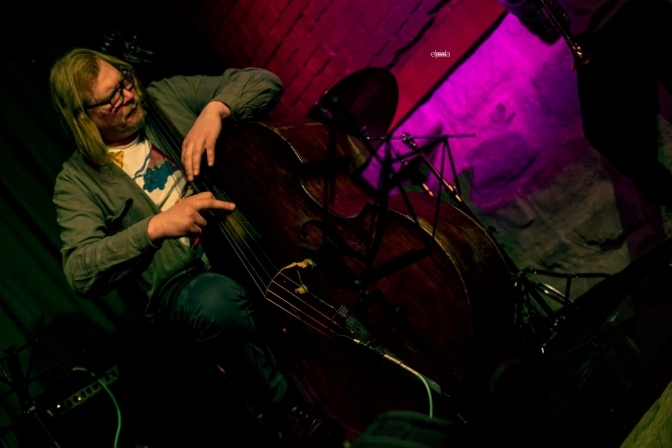 Now, with the drive of Sadovyy; the mentorship of Arnautov; visits from New York players and local legends and jazz royalty including the Ukraine-based son of Ella Fitzgerald, Roy Brown, Jr; there’s what you could call a school of jazz in an undercroft in Kryva Lupa Passage.

«I don’t know why, but in a very good way, it feels that something is about to explode when I hear these guys play,» Yakiv Tsvietinskyi, the Dnipro-born trumpeter said. «True art will take over the city very soon, something extraordinary and fresh.»

The LV Café is usually closed Mondays. For their event schedule, follow them on Facebook (https://www.facebook.com/lvcafelviv) and Instagram (@lv_cafe_jazz_club). From 15:00 to 18:00 daily, they offer a 30 percent discount on all food.